The Naples Episode of No Reservations: Just the One-Liners

Share All sharing options for: The Naples Episode of No Reservations: Just the One-Liners

Yesterday's episode of No Reservations found Anthony Bourdain in Naples, Italy, where he followed the red sauce trail, trying to find the Italian source of American gravy. He also crashed a wedding with his wife and drove a laughably tiny car "decorated with pink trim." Here now, on to the Quotable Bourdain — feel free to add your picks in the comments below.

1) On Italian-American food: "Meanwhile, we Americans got the idea that there were in fact many other areas of Italy, somewhere where they didn't use red sauce, and pasta was supposed to be eaten al dente. In no time at all, we were feeling bad about the stuff we'd grown up eating, and we turned our backs on our first tastes of Italy, like a childhood friend who had suddenly embarrassed us to be around."

2) On pizza: "Here's the most significant difference between New York style and Italian-style pizza: You eat it with a knife and fork. At no point is it acceptable, what I've seen with this technique, nationwide, you don't see people picking up the slice. They don't pick it up. Kooky, right?"

3) Again, on pizza: "I think everybody's pizza box or plate ends up looking pretty similar, all the sauce and cheese eaten out of the center, and who gets left behind, the crust. Like Jeremy Piven at a strip club."

4) Driving up a curvy road: "As a non-Italian wanna be Italian, I buy into this big-time. The infamous road of a thousand bends, barely wide enough to accommodate two cars, side by side. Which makes it very difficult for Fieri to drive his canary yellow Humvee. Me, I'm comfortable with my sexuality. I've got no problems with the size of my [car honk]. "

5) On shooting near crashing waves: "With the sea chucking up like Amy Winehouse at happy hour, Rocco dives straight into the dark water off the rocks. [Ed note: the Amy Winehouse line was edited out of the broadcast, but was in the provided screener.]

6) Again, on shooting near crashing waves: "The camera guys are getting backsplashed like at a Peter North shoot." 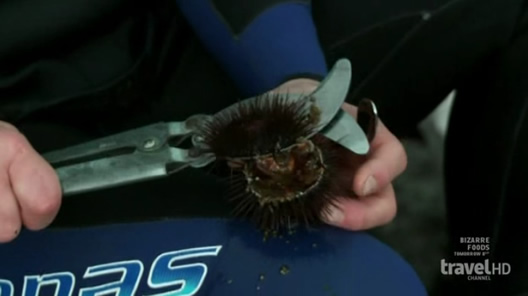 7) On using a sea urchin cutter (above): "Rabbis use these things."

8) On the Amalfi coast: "You've seen this vista before, right. It's some place calling itself Bella Napoli or Casa Amalfi or Pescatoris... some fake-ass faux-brick place with Serbian owners serving chicken parm or meatball subs in a strip mall somewhere."

9) By the docks: "If you actually live on the Amalfi coast, this is where your food comes from. You don't get freakin meatballs from the ocean. You get fish."

10) On the pasta puttanesca at Al Convento: "No puttana ever made this. Not even an escort."

12) "I'm not exactly a good Catholic. I do have the paperwork to suggest that I might be." 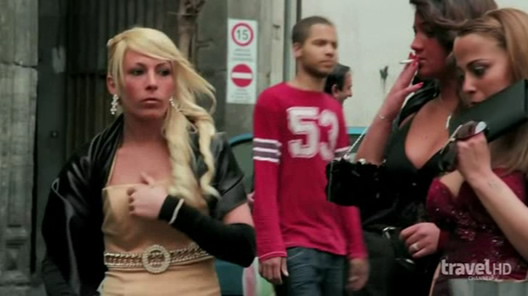 13) At a wedding: "We may never find the source of the red sauce Nile here, but I think we've located the inspiration for much of the evening wear choices of the Real Housewives of New Jersey."

15) Closing thought: "In the end, what is American food anyhow? It's food made in America, by who ever happens to be cooking here, right now."