Alton Brown on Molecular Gastronomy: "It's Not Food"

Share All sharing options for: Alton Brown on Molecular Gastronomy: "It's Not Food" 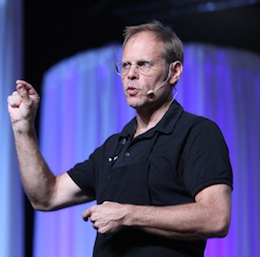 Here's a video of TV host/nerdball Alton Brown trolling for the approval of the Alice Waters-loving back-to-basics set by talking smack about molecular gastronomy at the American Culinary Federation national convention.

After admitting that he regularly uses xantham gum, he called molecular gastronomy "an interesting bunch of tools" but ultimately a "novelty." To the crowd's applause, Brown said, "You can't live on it. It's not food." Here's the transcript in full, and the video:

Every generation develops tools. And the tools are a wonderful way to explore the possibilities of the world and of creation. I use some emulisifiers. Yes, there's xantham gum in my kitchen. Why? Because I'm tired of shaking up a salad dressing. You know, it's practical things. Is it really cool to be able to make corn flakes out of peanut butter? Sure, it's a great trick. But it's a novelty, by and large.

And then he got to foams: "Don't think you can replace cooking technique with throwing a bunch of flavors on top of something. Any more than you can making it into a caviar. Or making it into a foam. If I live the rest of my culinary life without a seeing another foam, I'll be OK. I'm sick to death of foam. What does foam do? Cover our bad cooking, by and large." So no more cappuccinos?

He also says he doesn't "bam" anything (a la Emeril Lagasse), so there's that.

Update: 07/27: The following day, Alton Brown clarified a bit on Twitter: "Just to set record straight: molecular gastronomy is not bad...but without sound, basic culinary technique, it is useless."