John Currence on Theft and Thongs at City Grocery

Share All sharing options for: John Currence on Theft and Thongs at City Grocery

Welcome to the first-ever Eater National edition of Eater-wide feature Shit People Steal, in which we ask restaurateurs what items in their restaurant have been (or are frequently) stolen. 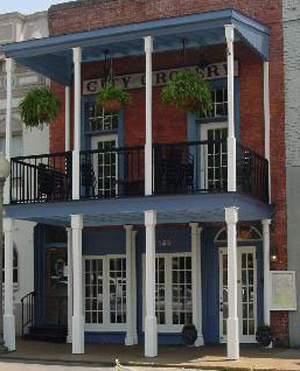 Chef John Currence has had his issues with thievery at City Grocery, including the sometimes weekly disappearance of his garden hose. "About two years ago we went through a six-month period where our hose was being stolen about once a week," Currence told us. "Who the fuck steals a water hose, much less a dozen water hoses???"

But it's the pair of planters that flank the entrance to his restaurant in Oxford, Mississippi that is a magnet for bad behavior... and stray unmentionables:

For the last twenty years we have kept two upright round planters outside the front door of City Grocery. They are usually planted with small trees or a decorative shrub. Daily we clean them of gum wrappers, cigarette butts, half-consumed bourbon and cokes, spent cigarette lights, chewed up chewing gum and the occasional thong.

It's an insulting way to start the day...when you go out of pocket to beautify the sidewalk, but never more frustrating than when one of these 100-pound monsters goes missing.

More often than not, I'll arrive and one of the plants has simply been snatched, but about once a year the entire planter has been purloined. It is frustrating...scratch that...it is infuriating, but, if nothing else, on that morning, there's only half the garbage to pick out of the pots.