Todd Barry on Chewing Noises and Bad Music at Restaurants

Share All sharing options for: Todd Barry on Chewing Noises and Bad Music at Restaurants

Welcome to Sound Cheque, where we sit down with one of our favorite bands (and comedians) to get the scoop on their city-by-city dining picks. 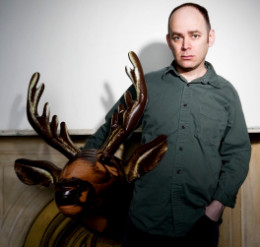 You may know the deadpan, absurdist comic Todd Barry from many places. He has hit it out of the park on most of the major late night programs, he has appeared in Darren Aronofsky's The Wrestler, and he has collaborated with the likes of Sarah Silverman, Louis CK, and Flight of the Conchords, to name just a few. Not to mention his three stand-up records are considered by many to be among the best of the last decade in the genre.

I got to talk to the New York-based comedian last night about his eating habits. Read on to find out about the restaurants and bars he frequents in NYC, his occasional fondness for chain restaurants, his thoughts on the "baffingly bad" music at Thai spots, and why he thinks oysters don't taste much different than beating frog hearts.

Where did you go to dinner last night?
I went to Bar Pitti with my brother.

Couple of blocks from my house.
I like that place. I had the rigatoni with turkey sausage. They also have a Penne Arrabiata that's really good.

I've seen you live a couple of times and follow your tweets. I've noticed that you talk a bit about experiences at Malaysian and Thai spots.
I did one joke eight years ago about a Malaysian restaurant. But I do eat at a lot of Asian food and, for some reason, I tweet a lot from Thai restaurants. The Thai lunch special is one of New York's best bargains. There's always going to be one of those where you live.

What about other places in Manhattan?
I like Cafe Orlin in the East Village. For Italian I go to Lavagna. There's a rigatoni at Lavagna that's great, similar to the one at Bar Pitti. It's sort of a creamed tomato sauce, with sausage. That type of thing. With peas. Three of Cups I go to a lot. There's this Japanese curry place that I go to called Curry-Ya. I like Molé on Allen Street. There's also this place Cafe Asean on West 10th that has this rice noodle dish that is really good. Noodle Bar in the LES and West Village have a similar dish. I like Five Points as well. I'm not usually into brunch, but I have dinner and lunch there. Schiller's is good. The garlic shrimp at Schiller's are ridiculous.

It isn't too much of a scene?
I find that Schiller's seems scenier than it actually ever gets. You walk in there and they're always really nice, even though I'm clearly not a scenester.

What do you like to drink and where do you drink it?
I usually drink wine. Sometimes I even go to wine bars. Yep. I like Veloce, Bar Carrera, and Terroir in the East Village. I sort of have them explain a wine to me, then they give me a taste, and then I say I like it, then they pour me a glass. I discovered Lambrusco recently — cold red wine. Perfect for people like me, who know they're supposed to say they like red wine better than white, but want it cold. I also like iced tea.

Would you say you are big into food?
I eat out all the time, but I'm slightly picky. I'm not like Anthony Bourdain. If I ordered the chef's tasting menu, I'd probably have an anxiety attack each time they brought out a new dish.

What don't you like?
I don't like tomatoes. Yesterday, they gave me this salad that had these beautiful tomatoes, that I would have eaten if I liked tomatoes. I was like, "Wow, these are nice ones. Really bright red." But tomatoes that aren't pulverized make me gag. These didn't, though. But I also didn't eat them. Conventional chopped or sliced tomatoes; I can't even look at them. I've never eaten canned tuna. Just being anywhere near that. Or egg salad. Just thinking about those things makes me nauseous.

What are some memorable experiences — good or bad — from your travels?
I really don't have too many terrible eating experiences, maybe because I don't have exotic tastes to begin with. On the road I like to do some research to find out local places. Sometimes I love to eat at chain restaurants when I have no choice.

Which ones?
I really like Steak 'n Shake. That's one of my favorites.

They're coming to New York.
Really? I love that. What else do I love? I'll eat at an Applebee's or TGI Friday's and eat a fried chicken salad with pecans all over it or whatever.

And you'll genuinely enjoy it?
I will enjoy it. I mean, I'd wouldn't eat there in New York, but if I am in the suburbs somewhere and that's my only choice, I won't be upset.

What are your thoughts on people who photograph the food they eat at restaurants?
There are people who do that? That seems like they're not in the moment. Sort of like people who make setlists when they go see bands or something. I've never been with anyone who does that. Maybe I've taken a picture with my Blackberry just to send to someone, but I don't routinely archive my dinners. It seems like a way to not enjoy your meal.

I like nice places, but I'm not super experimental. I'm not getting something that has a foam on it.

Are you opposed to the idea of progressive or molecular cuisine?
I haven't been to many places like that. My mouth doesn't water seeing or reading about a sea urchin foam. I'd rather eat roasted chicken. Perhaps I don't have the most sophisticated palette, but I can usually find something on almost every menu.

What's something weird that you've ventured to try? How'd you like it?
I have never had like a beating frog heart or anything, but I've had exactly two oysters in my life. I can't imagine a beating frog heart tastes much different. I tried these two oysters down in Key West many years ago. I sandwiched them between two crackers, horseradish, cocktail sauce, Tabasco. I had one, didn't enjoy it, but tried a second one so I could have a more fully formed opinion. I don't know how people just pour an oyster down their throat, but I've seen them do it.

I also don't like sushi. I wish I did, because lots of my friends love it. I like the rice, wasabi, the soy sauce, and the ginger. It's the fish part I have a problem with. Speaking of Japanese food, there's another restaurant I forgot to mention when you asked me earlier: Sobakoh. Noodles. They have sushi, too, but I won't be eating that.

Do you cook at home?
I don't cook at all. There have been times I've gotten letters from Con Ed saying, "We're showing no usage. We want to come look at your meter." I've lived at this apartment for over a year and haven't used the stove once.

You play festivals plenty. Any of them have particularly good food?
The festivals usually have catering tents, and they give you a few choices. It's usually good but not fancy. There's this hot dog stand called Asia Dog (they just opened up an actual restaurant on Mott and Kenmare) that used to show up at festivals and rock events. They have this hot dog with potato chips, jalapeño mustard, and ketchup that's really, really good. I'd never thought I'd enjoy a hot dog with ketchup on it, but I was wrong. I think I had my first experience with kettle corn at the Bumbershoot Festival in Seattle. I'm pretty sure it wasn't invented in Seattle, but that's where I tried it first. Sweet and salty popcorn. Very nice.

What about restaurants that play good music?
Thai restaurants definitely don't fall into that category. Bafflingly bad music. It's almost seems like they've gotten together on this and decided, "Let's all play bad music."

I don't eat tons of Thai food, but I can imagine.
It just seems like the cheesiest, hokiest pop. Not like guilty pleasure pop, but just bad pop. I don't know what it is, but it can be quite brutal. I'm sure someone will leave something in the comments about their favorite Thai restaurant that plays Radiohead or something.

Also, I really don't need to hear loud music while I eat. I'm baffled when I'm in a restaurant that's blasting music; you have to yell at the person you're sitting with, and no one seems upset. I'm always like, WHY ARE WE EATING IN A PLACE WHERE WE HAVE TO YELL?

Any last words?
Everyone should try to eat quietly and not eat like pigs and slurp their fingers.

What do you mean?
People just eating loud, chewing loud. Just gross. I've moved tables on more than one occasion because I end up sitting next to a finger slurper.

In New York?
It's a worldwide phenomenon. But I think I have a hypersensitivity to that sort of thing. There's actually something called "Selective Sound Sensitivity Syndrome." I found out about this from Sarah Silverman. She also hates chewing sounds. I think she mentioned it in an interview somewhere, and someone emailed her a link about the syndrome. I think Jonathan Ames has it also, because he mentioned it on Twitter. It is a problem. A lot of people don't pass my chewing test.