Share All sharing options for: Welcome Eater Atlanta, Dallas & Houston to the Dancefloor! 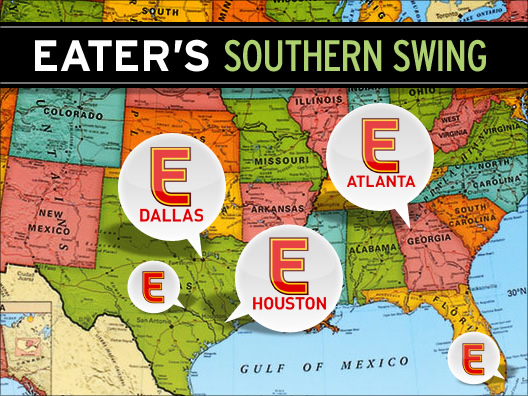 It's a pleasure to announce three new members of the Eater universe: Please say hello to Eater Atlanta, Eater Dallas, and Eater Houston! This expansion spree is part of what we're calling Eater's Southern Swing. The South is hot, both literally and figuratively, with incredibly active dining scenes. Chefs from all over the country are looking to the South as a source of both tradition and innovation, and now, Eater will be there to cover it every step of the way.

Eater Atlanta, Dallas, and Houston aim to serve as the go-to sites for the extensive coverage of the restaurant, nightlife, and bar scene coverage for which Eater is known. Along with Eater Miami and Eater Austin, they expand Eater's coverage of the Southern U.S., as does today's addition to our team of new Charleston, SC, Eater correspondent Stephanie Barna. Expect top news from all four new markets to bubble up here on Eater National, but if you're an Atlanta, Houston, or Dallas native, or just a fan of those cities, you'll want to dig deeper into the new Eater sites.

Eater Atlanta is headed by Jennifer Zyman, a restaurant critic for Creative
Loafing and editor of The Blissful Glutton, an award-winning Atlanta food and restaurant blog.

Eater Dallas is headed by Andrea Grimes, a career blogger and investigative journalist who has written for the Dallas Observer, D Magazine, Ms. and Jezebel.

Eater Houston is headed by Amber Ambrose, a proud native Texan, a champion of the fourth largest city in our nation (hint: it's Houston), and a freelance writer formerly of several Village Voice blogs. She was most recently, the executive editor of Houston Entree.

Friends, run, do not walk, to check them out. As always, we'd love your feedback. Oh, and don't think we're done with our regional expansion just yet. The year is long, and we're priming future Eater markets as you read these very words. Buckle in.