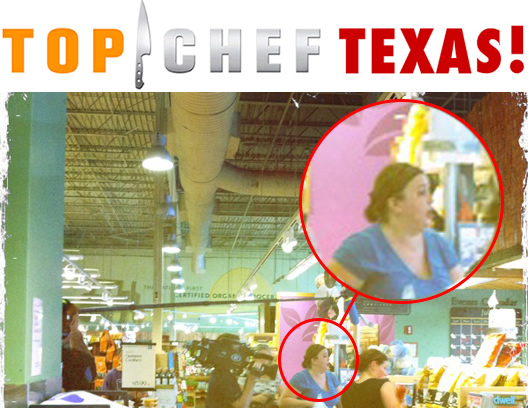 So last week we ran photos of Top Chef Texas shooting at Whole Foods, and now, thanks to a tipster, we've identified another contestant: Heather Terhune, executive chef at Sable Kitchen & Bar in Chicago. (See other photos of her here and here.) A call to her restaurant was greeted with, "She's not available."

Definitively, we can say that Terhune and Austin chef Paul Qui are on the show.

Now for the rumormongering: Last Friday a tipster told Eater NY that the other woman in those Whole Foods photos was of Grayson Schmitz, who worked at NYC's Wallse as a sous chef and Villa Pacri as chef de cuisine. She was apparently one of chef Fabio Trabocchi's "right hand girls."

Also last week, Eater LA got a tip that Nyesha Arrington (previously at Cache and a finalist in Eater LA's 2009 sexiest chef competition) is on the show.

In addition (phew) we're also hearing rumors that two chefs who work at Homaro Cantu's Chicago restaurant Moto are on the show.

Oh and by the way, word is that Top Chef is shooting in Austin this week. Know anything else? Got any photos? You know where to send them.