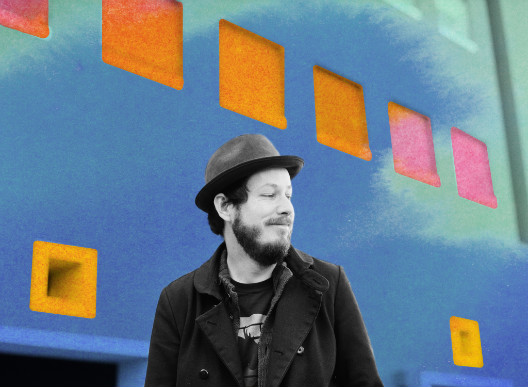 Andy Cabic is the lead singer of Vetiver, a San Francisco-based band that's been a critical darling pretty much since its inception seven or so years ago. The consensus on their latest record, The Errant Charm, is that the group seems to be veering slightly away from the folk that was their bread and butter to enter chiller territories.

As the A.V. Club puts it: "the band's balmiest, most relaxed outing to date, with enough down-tempo hooks to score a whole summer's worth of beach trips and barbecues." To get an idea, check out the hypnotic, addictive "Can't You Tell." A few days ago I got to talk to Cabic about his eating habits, which range from veggie-centric meals at home (though he assures he isn't a vegetarian) to shitty food provided by American promoters to grand feasts overseas.

Since you're based in San Francisco, let's start with that. What do you like to eat around there?
When I'm home, I eat a lot of salads that incorporate wheatberry, quinoa, tabouleh and tofu. It's stuff that's easy to keep and make quick lunches with. My girlfriend and I make different kinds of stews. A sweet potato one is a recent favorite. Lots of beets.

I've been in a relationship with my girlfriend for ten years, so we do all of this together. Since I live near Clement Street, I tend to go to restaurants there. Thai Time is one of my favorite places.

What do you get there?
I usually get the vegetable red curry. They used to make a dish there, it was like a General Tso's chicken made with tofu. But then they stopped making it. I used to be able to ask for it off the menu, but one day they just flat-out turned me down.

Are you a vegetarian?
No, I'm not. But I never really got into the habit of cooking meat. So when I cook at home, there's plenty vegetarian stuff. When I go out to eat there's meat.

What are some other places?
I love Fly Trap, that's a great restaurant. It's like California/Mediterranean. They have great appetizers. They did an amazing beet salad the last time I was there.

You like beets.
I really do. That's the restaurant I'm most excited to eat at when I come back to San Francisco.

I also like Firefly, that place up in Noe Valley. And I like Outerlands. I usually go there for lunch, so I get sandwiches. Last time I was there I got a reuben. I love the atmosphere there.

We eat at Tanuki and Mandalay all the time. Those are staples in our lives. At Mandalay we always get the tea leaves salad.

How about on the road?
You never know what the hell is going to happen. In the UK when you stop at gas stations at least you have a Marks & Spencer where you can get a lot of healthy things to eat. I try to eat healthy on the road, because if not, you start to get sick, you feel like crap, and the whole tour becomes an ordeal because you're fighting the fact that you're not feeling well.

In America, we go to Whole Foods a lot. In the band everyone has different tastes, so you can stop there and each person can figure out what they want to get and stock up on things to eat throughout the day.

When we play at night, that's when I take the time to walk around the neighborhood and figure out what looks good or ask someone at the venue. Some cities we visit, there are places I already know and want to go to, but it's not always possible to get there depending on the venues we play. So the ubiquity of Whole Foods is great.

Sounds like it's not as easy at night.
Sometimes you're short of money and the meal you get is what is served at the venue or what the promoter orders for you. What typically happens is that you will get what's called a "buy out" where they'll give everyone in the band ten dollars or something. Other times the promoter might deign to order for you and get you greasy, bad Chinese food without even checking with anyone. That's never really made sense to me. It doesn't sit well with your stomach at all.

And then of course there's the situation where you want to eat something after the show, and the only option in that area is shitty pizza.

Can you tell the difference in your playing if you eat something crappy?
For example, I'll notice the difference when I drink a beer before I play, because the gluten in it will kind of clog up my throat. So I try not to drink much beer when I go onstage. I might have a gin and tonic.

But more important than the quality of the food is giving yourself enough time between eating and getting onstage to play.

What are some memorable meals you've had, on the road or otherwise?
I have a bad memory. I can't remember specific restaurants, but definitely some of my best meals were had when I was touring with Devendra Banhart, especially overseas. I remember playing a show in Brara, Italy, and the promoter promised us this great meal after the show. We were so starving.

We drove like a half an hour to this country estate where we ate outside at this gigantic table with unending, amazing Italian food. That stays on my mind.

I've had great meals in Lisbon. The promoters there really take care of us at the ZDB. They take us to these small family restaurants that do awesome bacalao and serve great wine.

The hospitality of promoters in Europe is amazing and far outshines what you see in the States. So I have less memorable meals in the US, at least from a touring standpoint, because it's all basically left up to us.

On my own I've had beautiful meals at Fleur De Lys and Chez Panisse.

Does Devendra like to eat well?
He has particular eating habits. In fact, everyone in his group does. Touring with him, when it was time to eat, it was a conflicted moment since everyone wanted something different. There was certainly a time at the peak of touring with him, though, that promoters really rose to the occasion.

Any last words?
One restaurant that I love, and I need to mention it since they always take such great care of us and have always supported Vetiver, is Frankies Spuntino. We've played shows there and had record release parties in the back. Every time we play New York the Franks come to our shows. I definitely wouldn't want to talk about food without giving them props, because they are an inspiration to us. I love those guys. Generous dudes.