The Havana Episode of No Reservations: Just the One-Liners

Share All sharing options for: The Havana Episode of No Reservations: Just the One-Liners 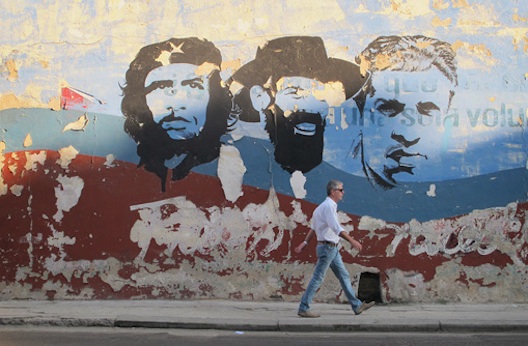 On last night's premiere of No Reservations, Anthony Bourdain traveled to Havana, Cuba, where he watched some baseball, talked shit about Hemingway, and got a rather close shave. There wasn't a whole lot of food, but the rum made up for it. Now, on to the Quotable Bourdain — feel free to add your picks in the comments below.

1) At the Cuban equivalent of a Little League championship game: "Hard to imagine suburban soccer moms shaking their asses to Afro-Cuban music between pitches."

2) On one of his goals in Cuba: "Personally, I'm scouting for a future shortstop to fill an upcoming hole in the Yankee roster."
3) On the dated nautical decor at a random bar: "Portholes and fish tanks. I love that shit."
4) On his priorities in Havana: "Time to satisfy my curiosity about this clearly state-owned establishment and catch up on my rum drinking, which is really something you should do here."
5) On his contribution to the reputation of Americans abroad: "I hope I'm not giving a bad impression of Americans. I've now had a mojito, a pretty healthy serving of rum and my second mojito's coming, all in about ten minutes."
6) On Hemingway drinking daquiris: "My theory always was that Hemingway was hung like a hamster. Not that there's anything wrong with that."
7) On aristocracy: "They might be hard to live with, but they tend to leave nice buildings behind."
8) On a trip to the barber: "Somewhere I could hear my camera guy muttering about how he was nervous, and I could certainly feel the man's trembling fingers on my neck as he came at me with a straight razor, but in my zen-like state of calm, I was blissfully unaware that in the world outside my head it was like carving a roast. A slaughterfest."
9) On the main problem with Cuban baseball: "No beer? The revolution is clearly a failure. Count me out, commie teetotalers."
10) On the wares available from street vendors: "Across the street they're selling rubbers. Which I gather are much needed around this neighborhood after dark."
11) On the timelessness of Havana: "I've been to a lot of places, but I can't think of another place that's been less fucked by time than Havana."