The Vaccines on the Best Burgers and Rocky Mountain Oysters

Share All sharing options for: The Vaccines on the Best Burgers and Rocky Mountain Oysters 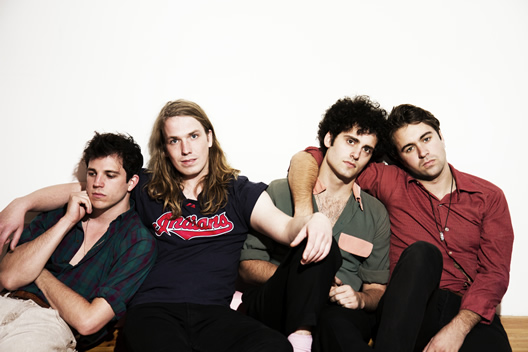 British garage rockers The Vaccines seem to have blown up overnight. They've been around for exactly one year and have already grabbed the attention of the BBC, Q Magazine and nearly every other music mag in the UK. They've been hailed as the year's biggest "buzz band," but unlike most acts under the fateful identifier, the Vaccines are actually good! The group had their first US tour in January, selling out venues like New York's Bowery Ballroom and nabbing an MTV Award for "Best New Band of 2011." I caught up with frontman, Freddie Cowan, to chat about The Vaccines recent adventures in American cuisine.

But to be honest I don't eat out that much when I'm in London?.

Are you more of a home-cook?
Not really... the thing is I try, but I live with my two younger sisters and they are just fantastic cooks. So I try, but generally it's not accepted by them. I'm not really allowed.

You had your first American tour back in January. What's your favorite US city you've toured in because of the food and what restaurants do you usually visit while there?
Denver was pretty good for me. We went to this place called the Buckhorn Exchange. The walls are plastered with taxidermied animals and there's just unbelievable meat! You can get buffalo and ostrich, but for some reason I just got the salmon. But they also have this thing called "Rocky Mountain Oysters." Do you know what that is? Buffalo testicles!

Yes I do, but I've never had one... did you enjoy it?
Oh yeah, it's delicious! It's really good actually, it's not like an apple. It's not what you'd expect really, they kind of crush it all up and fry it so it comes like bits of fried chicken. It's very tasty. They also had crazy stuff like alligator tails, all sorts of chicken parts like chicken hearts. And I used to be really against stuff like that, but I guess if you eat meat it's better to eat all the parts of the animal meat. But if you eat at McDonald's that's probably worse?..

When you are away from home touring, how do you usually go about finding good local grub?
Well we have a secret weapon with us on tour. Our sound engineer used to do sound for The Killers and before that he did sound for The Strokes, so he's been all over the world 20 times. Every city we go to he knows the best places to go.

Do you have any particular dining requirements on the road? Are you vegetarian, vegan, anti-fast food or have specific food 'rules'?
Oh no, quite the opposite! The thing about being on tour is that you have to eat when you can. If you're driving for 12 hours sometimes all you have to eat is what you can find at a 7-Eleven so you end up just eating as much as you can whenever you can.

I heard you're a pretty healthy eater. What do you usually eat on the road to keep from getting run-down?
Well I guess we try and have salads as much as possible, but the salads here in the US are so big that it's not really healthy at all. I mean, there's more chicken in a Caesar salad than in the meat equivalent in a burger. In truth, we don't actually stay that healthy on tour. We try to have a burger in every city and find new and different places.

Where have you encountered the best burgers so far?
There's this really excellent burger place on Ludlow Street (in New York City) called Mikey's Burger and of course In-N-Out Burger in LA is really really good. And Mel's Diner in LA too?.

In you unbiased opinion, would you say there are better burgers in New York or in LA?
I think LA has a better burger... but then again, New York has that place The Spotted Pig, Jay-Z and Michael Stipe's restaurant. That was amazing!

What about their burger sets it apart?
The burger is really good but they also have these things I'd never had before called shoe-string fries. They serve it with a mountain of shoe string fries, ti's great... I also had the steak there which is just phenomenally good as well.

Can you describe the best food experience you've had on tour?
Katz's in New York was pretty amazing... that's up there. But I think the Buckhorn Exchange in Denver was the most incredible, I'd recommend that to anyone.

It seems there's an ongoing debate among my British friends over the merits of Vegemite vs Marmite — which do you prefer, and why?
Oh my gosh, I love Marmite! Big fan of Marmite?.

I can't really stomach either to be honest, I think we Americans just can't get into it for some reason. It's kind of a mystery paste...
It's like the same thing that's in beer, like yeast or something. Marmite's incredible though, how can you not like Marmite? Do they have Marmite in New York?

I believe you can, there's a place called Myers of Keswick in the West Village that sells just British food products? and likely others. But while we're making British-American food comparisons, is street food as big of a fad in the UK as it is in the US?
Oh no. Absolutely not. You would never eat anything off the street or from a street vendor in London. You just don't do it. But I've been to Thailand and had some of the best food I've ever eaten from street vendors. But in England, I would say don't do it! But I didn't know that'd become such a craze in the US...

Let's get a little metaphorical here: if The Vaccines' sound could be captured as a food or meal what would it be?
Oh that is a hard one... just one food...?

Could always go with Marmite in a syringe?.
MARMITE! That's exactly what it'd be, there ya go, haha. People either love us or hate us so Marmite is perfect!

And now for our round-up of your favorites:

Best pizza: Pizza Metro in London, UK where they serve it by the yard!
Best taco/burrito: I've only had one burrito actually and it was from Chipotle in New York, NY. It's a chain so I'm sure there's better but it was damned good!
Best burger: Five Guys in Miami, FL
Best cocktail: The Wolseley in London, UK
Best sweets shop: Cyber Candy in Brighton, UK
Best tea: Any kind of mint tea is good tea. I make a great cup of mint tea!

The Vaccines' debut album "What Did You Expect From The Vaccines?" is available now on Columbia Records.

Check out the video for their single "Post Break-Up Sex"

· The Vaccines [Official Site]
· All Sound Cheques on Eater [-E-]