Welcome to Ask Dave Arnold, a new regular feature in which David Arnold, director of technology at the French Culinary Institute, provides in-depth answers to reader questions on food science, cooking technique, and other issues. If you'd like to send in a query, do e-mail it in. To this week's batch: 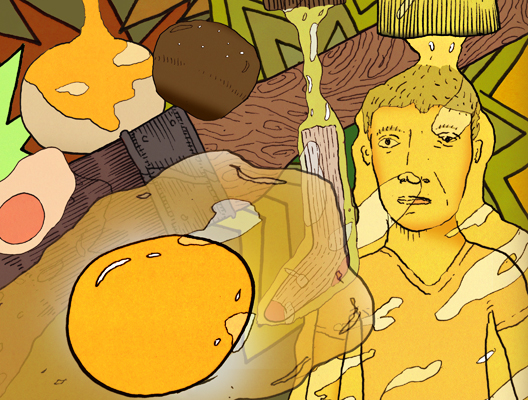 Question One: I was recently noticing differences in the sheen in my egg washed products. I tried to consult On Food and Cooking, various pastry books, and searched around the internet, but information was nonexistent or pretty basic. I was wondering what you could tell me about the different variables involved in egg wash and how they affect the finished product. Differences like different ratios, salt, time, sitting before baking or baking duration, eggwash on frozen products, etc. I know I could probably do a lot of experimenting, but I figured you might know something about the science of it all.

Dave Arnold: Washes are made with some combination of egg whites, egg yolks, water, milk, and fats. To figure out what the wash is doing, look at the ingredients individually.

Egg white is basically protein and water. In the oven it dries down to a shiny surface coat of protein. This coating provides a certain amount of resistance to the tooth, but it’s not crunchy; it’s a little rubbery and resilient. Think of the overcooked edge of a fried egg. Egg white is also a good glue (which can be a problem if it’s located, say, on the side of your puff pastry gluing layers together and preventing puffing).

Whole eggs provide a mix of the benefits and properties of white and yolk. Shiny brown and somewhat tender.

A water wash can promote crust in breads, similar to injecting steam into the oven, keeping the crust pliable longer to promote oven spring (the quick inflation breads undergo when they hit the heat of the oven) and gelatinization of the starch on the surface of the bread. Water can also be used to thin out an egg wash, making it easier to apply and somewhat lessening its effect. Like a shiny crust but don’t like the bite of a straight egg white? Add some water.

Milk is water, protein and fat. A milk wash tenderizes because of the fat, but produces a matte surface because casein, the protein in milk, isn’t shiny. Milk protein doesn’t get tough like egg whites proteins do. Milk solids brown nicely in the oven, so a milk wash promotes browner crusts.

Fats, like melted butter, make for thinner, more tender crusts, but won’t produce the shell-like coating that eggs will.

As to the more complicated part of your question: ratios, setting times, salt addition, and freezing, I can only hazard guesses. Here goes: the longer a wash sits on a product, the more water evaporates, therefore lessening the effect of water in the wash. What I don't know, however, is how far the wash will sink in — thickening the crust versus evaporating.

I could think of a bunch of effects salt could have on egg proteins, but I'm not sure what the effect would be.

Freezing a product after washing but before baking would, I think, work fine as far as the proteins and fats are concerned. You might have to re-moisten the surface. If I find a good source for this info, I'll update here and let you know.

Question Two: We're going camping on the Cape next week. We're going to have a small motor home with electricity if we hook it to a generator. I just bought my first circulator and wanted to take it on the road. Do you have any delicious recipes we can use while we're out in the wilderness?

Dave Arnold: Bringing a circulator into an RV is a wise decision; burner space in an RV is extremely limited. Even if you cook traditionally, putting cooked foods in ziplocs in the circulator can keep them in top condition while you are preparing other parts of your meal.

You can also bring pre-cooked bagged stuff with you and re-therm without destroying the food (I usually re-therm between 54 and 55 C). If you have a vacuum bagger, you can make world-class veggies in the circ.

Where the circulator will really shine, however, is when you pair it with that other RV favorite: the grill. Let’s say you catch some wild striped bass while you are up at the Cape (I assume you mean Cape Cod, Massachusetts, since for me, there is no other "Cape"), put the fillets in zip lock bags and cook at 57 C (135 F) for 30 minutes to one hour, depending on thickness. Pull out and give them a quick grilling. Nothing is finer. Do the same with rib steaks (55 C), chicken, etc. Come to think of it, circulators should be built into RVs.

Question Three: Do you have a good recipe for a vegan clam chowder?

Dave Arnold: Vegan clam chowder! A tough problem indeed. I don’t have a recipe, but I’ll tell you how to develop one.

As a rule, I don’t like substitute foods. I like foods. Instead of a substitute chowder let's figure out how to make a soup that evokes the spirit of clam chowder and happens to be vegan.

First, choose what kind of chowder we are aiming for: Manhattan or New England. Both start by cooking bacon, then sautéing onions in the bacon fat. Clam juice, diced potatoes and sometimes celery are added next. To this mélange, Manhattan chowder folk add diced tomatoes and tomato juice, while New England chowder folk add milk, cream, or some combination thereof. Clams are added last to prevent overcooking. I don’t know why Manhattan clam chowder is named after the Big Apple, as we mainly eat the New England variety here and, as far as I can tell, the Manhattan version is of Portuguese extraction which would place its origins in Rhode Island. Both chowders are actually from New England.

The essence of clam juice is the sea. For taste of the sea we will use seaweed. I suggest a combination of kombu dashi (giant kelp broth) and crumpled nori (the sheets of laver wrapped around sushi rolls). Kombu will serve two functions here: 1. Provide seafood flavor. 2. Provide umami. Our tongues sense umami, or savoriness, in the presence of free amino acids –specifically glutamic acid (of MSG fame), and kombu has free glutamates aplenty. For more than you ever wanted to know about kombu dashi, see my posts here. A splash of mineral-tasting white wine (like a Chablis; think clam shells) might also be a good idea. Although adding soy sauce to this stock would be delicious, it would also be a huge mistake. Even a little added soy will make this dish taste Asian. We are looking for east coast USA. 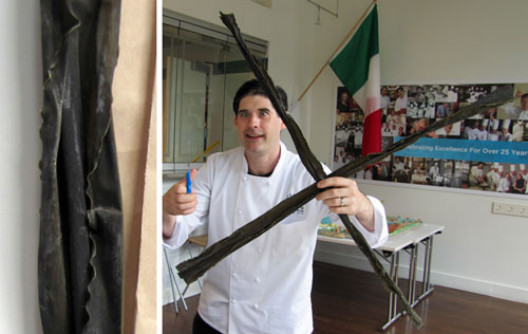 Me, some hidaka kombu

The two most obvious ingredients to provide the chewy, meaty nature of clams are sautéed mushrooms and seitan, or cooked wheat gluten. I’d use both. Mushrooms have a great texture and are also high in umami. I’d sauté them and add them to the seaweed broth (along with some dried mushrooms if you’d like) to make a seaweed/mushroom-stock combo. Seitan is a dough made with vital wheat gluten that’s poached in a flavorful liquid (I recommend using your seaweed/mushroom stock). You can purchase ready-made seitan, but you should really make it yourself so you can adjust the flavors. Making seitan isn’t difficult and the main ingredient (vital wheat gluten) is available in most grocery stores.

As an aside, I think seitan deserves to be treated as its own ingredient, like tofu for instance. As someone who enjoys making fresh tofu, I never use it as a meat substitute; I showcase it as the terrific product it is. Seitan deserves similar respect.

Next we need to add the smoky notes of bacon. You can either smoke a component of the soup — the potatoes, the seitan, etc — or add liquid smoke. Believe it or not, liquid smoke is not fake — it’s made from real smoke that has been treated to remove potential carcinogens and other nasties. Industrial food producers have access to some very high quality liquid smokes that taste quite good (I’ve tried them).

Unfortunately, most supermarket brands have been altered to the point that they provide a monotonic, very obvious “liquid smoke” flavor –think of them as skimmed smoke (PS. That is a jab at skimmed milk, which I hate). You can buy a high quality smoke powder made by spray drying liquid smoke from Terra Spice. Use powdered smoke sparingly; just like real smoking, if you go too far your food will become bitter.

If you are trying to make New England vegan chowder you will also need to emulate the mouth-feel of milk and cream. I’d use fresh nut milk — almond or cashew, or rice milk, or a combination of the two. Coconut milk would work (and taste great), but the coconut flavor definitely doesn't say “New England.” To make your own nut milks, blend the hell out of a cup of nuts and between 2 and 4 cups of hot water. More water = thinner. For this recipe, go thick –2 cups water per cup-o-nuts. Strain the result though some muslin or linen napkins. Yum. Rice milk is another good option. Grind up a cup of rice in the food processor and let it soak in 4 cups water overnight in your fridge. Blend well, and strain as for nut milk. Rice milk flavored with cinnamon is the base of the Mexican drink horchata. I think a rice-milk/almond-milk mix would be nice for our chowder. I would avoid boiling the chowder after adding the milks.

Sauté mushrooms and add to dashi with crumpled nori and smoke powder.

Make seitan and simmer in dashi for an hour or so.

Remove seitan and sautee (this should make it chewier and tastier).

For New England: Cook till potatoes are tender, add seitan and nut/rice milk and reheat to just below the boil.

See you in two weeks. Have questions for Dave? Send them in.

And for more answers to your cooking issues, tune into Dave Arnold every Tuesday at noon on the Heritage Radio Network