Chris Ying on Not Settling, Semi-Ridiculous Ramen Recipes and the Future of Lucky Peach

Share All sharing options for: Chris Ying on Not Settling, Semi-Ridiculous Ramen Recipes and the Future of Lucky Peach

Chris Ying is the editor-in-chief of the print version of Lucky Peach, the new collaboration between McSweeney's and David Chang. We talked to Ying about the first issue, fictional food writing, and what the future holds for the quarterly (Chang works out with football player Tiki Barber, among other things).

Why do a project of such magnitude? It sort of seems to me it could have been half as big and people would've still flipped out.
I think originally when we set out to make Lucky Peach, the first issue, our ambition was to make it half the size it actually is. I think our predicted page count was just about half what we ultimately ended up with. As is the cause with so many things we do here at McSweeney's — as is I'm sure the case with ZPZ and Momofuku — things start to snowball and you ended up incorporating so many other things that you learn along the way. In this case, it just ballooned up into this gigantic quarterly.

So do you anticipate future issues being as large? Or are you going to scale it back to the original concept?
No, I think it'll stay this size. Once you've set a certain bar, you've set certain expectations, I would feel bad downscaling at this point. Peter Meehan and I were kind of half-jokingly talking about doing a double issue. I'm sure if that ends up happening, it'll be just a complete monstrosity at that point. It will just become unwieldy. Physically impossible. 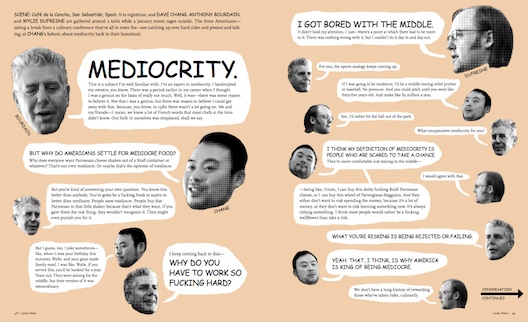 Do you consider Lucky Peach to have any kind of editorial angle? If so, what?
I don't know that Lucky Peach or our editorial staff has a certain editorial angle or opinion. I think that our main goal is to let everyone say their own piece and not interfere too much. Obviously, it leans a little toward favoring people who are willing to experiment, and we sort of espouse that idea of experimentation and pushing things forward and not settling.

If nothing else, we were looking for dissenting opinions from our own. We really wanted to get someone who could just talk about how bad Momofuku's ramen was, actually. We didn't find that. I thought the greatest thing would be to have someone who hated Dave Chang, hated McSweeney's, wanted to be able to voice their opinions. That was kind of our general editorial goal, or the spirit of the whole thing, was to get people who had something to say. Regardless of what that was. People with actual opinions about things.

How do the roles split up between you and Chang and Meehan?
Most of the production side of things, in terms of designing and packaging, all kind of falls into the McSweney's court, with just a few designers and editors over here. We all chipped in on this thing. As far as editorial things go, Peter and I basically spent months and months on the phone and at each others' dinner tables, editing side by side or sending back and forth. So you know we really split those editorial duties a lot. Chang sees everything and weighs in on everything, and kind of gives general direction and guidance for us. And obviously he's doing a lot of the recipe development and things like that.

Yeah, there's the ramen-crusted skate, and?
Yeah, and I think my favorite was the instant ramen Parisian gnocchi recipe where he makes a pate a choux out of instant ramen paste. Real fun.

I heard the next issue is going to be a little bit more esoteric, concentrating on the idea of ripeness?
If Dave and Peter have their way, we'll just go completely esoteric. They're always going off on philosophical tangents about things. They try to keep each other grounded in reality, though.

The next issue is going to be a little bit more esoteric in that it's less of a concrete theme, it's not just ramen or a specific food type. The theme is actually "The Sweet Spot." So you can take what you will from that, metaphorically. And physically, and temporally.

Can you tell me about anything you're working on for that issue?
It's still up in the air, but it'll span quite a range of things. From a very literal sweet spot and doing dessert recipes to more of a metaphorical sweet spot across different fields. I know that Dave worked out with Tiki Barber at one point. Trying to work that in. And those guys went up there to see Rene Redzepi at Noma, so there's different things from Rene to sports figures. 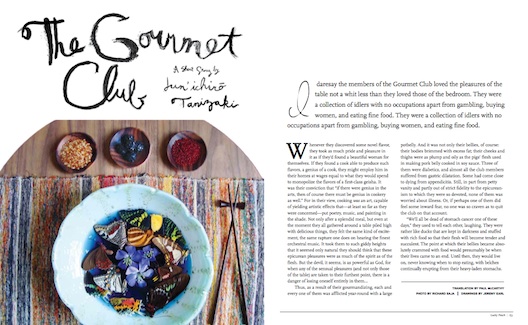 I was intrigued by the decision to include fiction. You don't see that often in food magazines.
The whole idea of Lucky Peach was to make a magazine that appealed to people who just liked writing and liked art and also happened to like food. Or maybe don't necessarily happen to like food. That's kind of a reflection of our own taste and the people who run in our circles. You know, Peter and Chang, both of them have wide interests in lots of different things and also happen to be extremely talented in the food field.

When we first started talking about Lucky Peach, the idea of running fiction was almost the first thing we cam up with. Because it really breaks down this divide between food magazines and non-food magazines. That piece, that [Jun'ichir?] Tanizaki piece is actually one of Peter's favorite pieces of writing. So he's been a food writer forever, and publishing all sorts of publications, and none of them ever really run fiction. It's a great opportunity to share our taste in writing and art.

Are there any writers you would love to get involved with future issues?
There are definitely lots of writers that we want to feature. The way our editorial process works is we come up with an idea for something we'd like to hear about and then we figure out who we would ideally like to have. For this first issue, it worked out amazingly well. You want to write about regional ramen variations in the South, then of course you want John T. Edge to do it. And John T. Edge just happens to say yes, and you're kind of beside yourself that these people are willing to contribute to your magazine. There are lots of people still out there. I'm sure lots of them will say no to us. But so far our batting average is pretty good.

There aren't ads in Lucky Peach, and there seems to be some skepticism around the internet as to how the magazine will make money.
Obviously, people who are wondering if this magazine will make money have never seen a McSweeny's project. Money is just sort of this afterthought. I'm just kidding. So far, our basic goal is to try to make this thing, see if we can do it, and see if we can not go broke doing it. So far it seems like, between this and the app, it will be something that doesn't lose money.

Now that we've seen that we can produce this thing on this scale with no ads, in the future if we want to make it on a larger scale or if we want to actually make money, we're going to think about taking a few ads in the magazine. People aren't wrong to question whether or not this can make money with no ads and it being 174 pages. It's a fine question, and one that we're asking ourselves.

What's your favorite ramen restaurant in the states?
I only have real ramen experience in San Francisco, and there aren't too many places doing it, but there's a place called Katana Ya in Union Square that does a pretty solid job of it. That would probably be my favorite here in San Francisco.