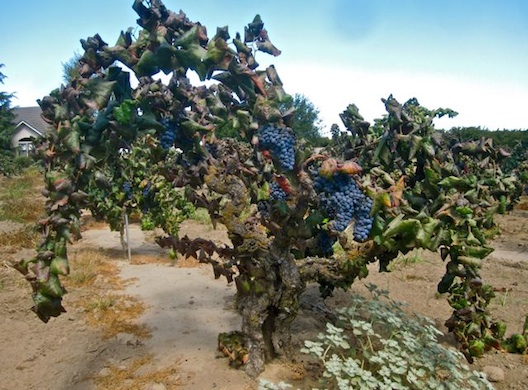 Though The Volstead Act never explicitly mentioned it, during Prohibition the head of every household was allowed to produce 200 gallons of wine, or any other fermented fruit juice, per year. That works out to just over two and a half bottles per night, per family; or, enough to get everyone in the house pretty lit and just enough to keep California's grape growing industry alive.

During this time, grapes were trucked from California to towns all along the East Coast — notably New York City, where auction houses at Penn Station acted as distribution centers for home winemakers and bootleggers. As a result, demand shifted from grapes that could make quality wine to grapes that could simply make the trip without showing up looking they'd been mauled.

Alicante Bouschet, which is a crossing of Grenache and Petit Bouschet created by Henri Bouschet in 1866 was — and still is — known to make only serviceable wines. But its thick skin allowed it to be transported with ease and its red pulp (it's one of the few teinturier varieties) were enough to turn it into California's darling grape almost overnight.

Because of its red pulp, bootleggers could press the Alicante grapes 2 or 3 times and add water and sugar and produce up to 600 gallons per ton (around twice as much as any other red grape can yield) of something that at least resembled wine. And home winemakers could buy half the grapes and make twice the wine.

Growers responded to this new demand.

By the early 1930s Alicante Bouschet was the second most-planted grape in California. Growers around the state were ripping up their fruit orchards in order let the rambunctious grape populate itself. Even Joseph Gallo Sr. jumped on the bandwagon, jumpstarting his business by planting half of his vineyards near Modesto to Alicante.

Sugared-up, Watered-down
Despite its popularity among bootleggers out East, most of the grapes still went to home winemakers. The wines they produced could have probably made Manischewitz drink like Chateau Margaux in comparison, but it was the Alicante America's underground bars were slinging. The wine served to all of the Prohibition-defying denizens along the eastern seaboard probably hovered near 8 percent alcohol with enough sugar to give someone diabetes after one night out. 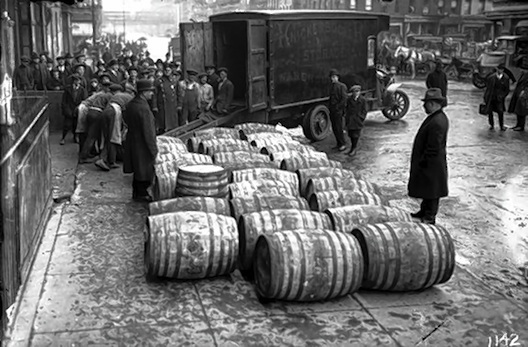 After 14 years of drinking homemade wines or the sugared-up and watered-down versions that populated the underground, the American palate needed an exorcism. That, and nearly 75% of California's vineyard land would have to be ripped up if the state ever wanted to produce quality wine again.

The Aftermath
The grape explosion of the 1920s — which saw the widespread planting table grapes and sub-noble wine grapes like Alicante — would be the most damaging result of Prohibition.

In the years following repeal, most of the grapes grown in the state went on to be sold as table grapes. Only those that were damaged and unsuitable for supermarkets were sold to wineries to be vinified into wine or distilled into brandy. The wines sold poorly (go figure) and the incentive to rip-up and replant would take decades to arrive.

Today, Alicante is still widely cultivated in the Alentejo region of Portugal and in Southern France, where it is used as a blending grape. In the U.S. it's planted throughout California, but less than 1,500 acres of the 40,000 that existed during the 1930s remain.

Alicante's most enduring legacy in the state is the supporting role it plays in much of the Old-Vine Zinfandel. Many of the ancient vineyards in Sonoma and Napa that are home to true Old Vine Zin — some of which were planted during or before Prohibition — are intermixed with varieties like Carignan, Petit Sirah, and Alicante. These inter-planted grape varieties undoubtedly make their way into the final blend contributing, in their own small way, to the overall character of California Zinfandel. In fact, some of California's most famous Zins — from the likes of Ravenswood, for one — often contain up to 25% of these non-Zin varieties, which have collectively become known as "mixed blacks."

Alicante is also still bottled on its own. Most notably by Ridge Vineyards in the Santa Cruz Mountains, who produces a mono-varietal Alicante from the historic Pagani Ranch Vineyard. It's a beautiful wine that has the ability to age quite gracefully--a far cry from the Alicante of the 1920s, but perhaps the finest ode there is to the fallen star of Prohibition-era winemaking.

A History of Wine In America, Volume 2 by Thomas Pinney
Last Call: The Rise and Fall of Prohibition by Daniel Okrent
When The Rivers Ran Red by Vivienne Sosnowski