Share All sharing options for: Mini Cupcakes Are the New Sad Foodie Craze

We've entered a new phase in L'Époque du Cupcake: mini cupcakes. They're like regular cupcakes, except smaller. And, at about $1 each, they're theoretically cheaper, although, according to New York mini cupcake purveyor Tonnie Rozier, "People don't want to feel like a pig eating a gigantic cupcake, but they'll have five of the smaller ones."

So it's kind of a trick. Because nobody just eats one mini cupcake. Only mini people would do that. No, you eat five. Or ten. And then you just spent ten dollars on cupcakes. So now you're more chubby and you're out ten dollars.

According to Crain's, the mini cupcake's growth in popularity is due to "Americans focused on healthier eating and avoiding carbohydrate-laden sweets." And in evidence of this new, sad trend: There are several bakeries in New York that exclusively sell mini cupcakes, and apparently some regular cupcakeries have added them to the menu after customers asked for them. Maybe the real trend is that people want to spend ten dollars on cupcakes.

Using Google Correlate, you discover that there have even been times in the past couple years where the search term "mini cupcakes" totally eclipsed "cupcakes." Certainly this is all Michelle Obama's fault.

Also, according to the data below, they're pretty popular in Utah.

Cupcakes vs Mini Cupcakes Over the Years 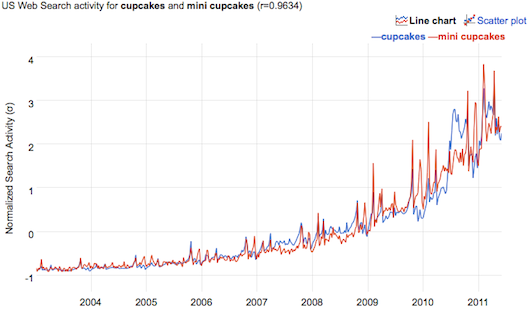 Cupcakes vs Mini Cupcakes by State