Share All sharing options for: Reggie Watts on Weed Dining and Evaporating Donuts 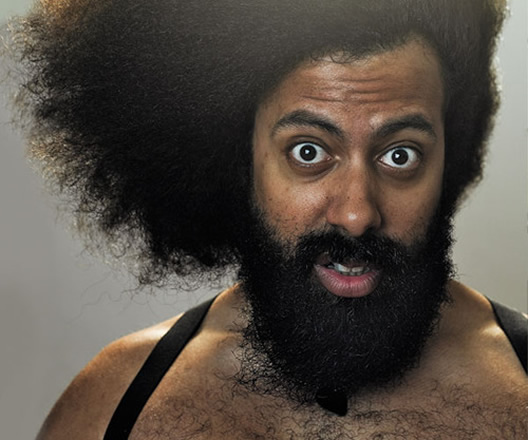 Reggie Watts has been called a loop-artist, musical comedian, or simply a stand-up comic. But however you define his blend of loop pedal and hilarious a capella, it's impossible not to love. A regular in the NYC comedy scene, Watts has become a regular on Comedy Central, the Conan O'Brien Show and Late Night with Jimmy Fallon. His musical chops have landed him on the bill at Brian Eno's Luminous Festival and led to performances with Regina Spektor and LCD Soundsystem. When he's not touring the world, Reggie resides in Brooklyn, NY, you can catch him live this summer at NYC's Summerstage. I caught up with Reggie to talk everything from French cuisine to Cannabis tinctures.

You've been a Brooklynite for some time now, what are your favorite local haunts?
I like Roebling Tea Room, they've got really good food in general for a place that's nice to hang out if you want to have something well-made and well-constructed. I also really LOVE Colette in Williamsburg (Brooklyn). It's just really good food, really healthy for French provencal food. I also like Juliette and I also like Curly's vegetarian restaurant, that place is really fun.

Sounds like you really love French food, do you have any regular dishes?
At Roebling I like the drunk beans, they're really delicious. For brunch they have this dish with beets and eggs and kale and it's just the best! At Juliette I usually like the Eggs Moroccan I think it's called and the escargot of course. And at Colette I enjoy pretty much everything there, plus they have really great coffee.

Your mom's French, did you grow up eating a lot of French food? What were typical meals around your house?
Well I don't really remember much until around age four, but at that time I was growing up in Montana. I think my mom tried to prepare relatively fresh things but it was also the height of packaged and processed foods in the 80s. So she'd buy things like Shake 'n Bake, frozen french fries you could bake in the oven, stuff like that because she was also working really hard and didn't have a lot of time to make food. Though she did make dinner every night. I remember eating a lot of burgers, french onion soup, deviled eggs, and cereal. Pretty American 80s diet.

Can you describe your best food experience on the road?
I went to this place called Moto in Chicago, it's a molecular gastronomy restaurant. I was there performing at a conference called PopTech and the chef [Homaro Cantu] from Moto gave a presentation there on the kind of technology they use to make their food. I talked to him and he was like, yeah hit me up when you come back through town and I'll hook you up with dinner. So next time I was there I hit him up and he made us this 12-course meal, it was pretty crazy.

Molecular gastronomy can get pretty bizarre, what were some of the weirdest/coolest creations you had that night?
Yeah I know what you mean, they do weird stuff like roasting vanilla beans with lasers, haha. But that night there were these donuts, I think they called them "donut shapes." But it was like donut flavors in different states of being. Like there was a donut soup, and a donut that looked like a donut but when you put it in your mouth it evaporated into nothing. There were some other crazy variations too....

So when you're away from NYC touring, what's your favorite city for food?
Portland kicks ass for food. They have really great food there, Melbourne, Australia also has really great food. I would say Auckland is pretty great for food too. I mean, France also — Paris — the French don't really fuck up their food. I like pretty much anywhere in France, although in the North of France, I've had a lot of great meals at little bed and breakfasts. And Japan has pretty great food too, I had great meals all over Tokyo, so that's another one like that.

So if Portland is your fave Stateside, the immediate thoughts are Slow Food movement and street food. Ever sample any of the latter there?
Oh yeah of course! It's such a big deal there. It's making a statement here in New York too now. But yeah I love the food trucks because at first you think it's just going to be something like Shawarma or something like that, like in New York. But it varies and can get so specific. Everything from like Brazilian-style food to places that only make weird pastry things that are filled with peanut butter and jelly or all kinds of other weird fillings. Or there'll be one just for donuts or different types of bratwurst or different apple ciders or sauerkraut. But it's all really great food, like world-class food. It's kind of incredible because it can feel like there are these world-class or highly rated chefs working out of these tiny little boxes that stretch for blocks!

I know you have a soft spot for the Pacific Northwest since you lived in Seattle for many years. How'd the food there compare?
Well there's such great seafood in Seattle, as we all know. There's a restaurant that opened kind of recently — in the last six years — called In The Bowl that is just killer! It's vegetarian. There was also this place I used to go a lot called Cafe Flora, also a gourmet vegetarian place. There are also some Italian restaurants at the end of Madison that connect to the beach there that are really good. There's also this place called Lark that is really great, pretty much a lot of places in Fremont are just kick-ass.

When you're on long tours, do you have any food vices or perhaps go-to comfort foods?
Well, I'm unfortunately a sucker for cookies. Specifically organic cookies, but pretty much cookies, oatmeal and on occasion... well... most of the time actually I like ordering room service when I'm staying at hotels. Haha... even though it's ridiculously expensive, they're good for comfort food.

You tour a lot of festivals these days — especially now that the big ones are combining now comedy and music — which ones have the best food in your opinion?
Big Day Out! When I did that festival this year they had really good food. There was this Krishna restaurant that served Krishna-style vegetarian food and it was amazing. They give you just a ton of grains, vegetables, samosas and this kind of millet dessert that's made with honey and raisins. But I was actually really surprised that the quality of food there was pretty kick-ass.

So when you're in new places, how do you usually go about finding the best local grub?
Yeah I like to do a little bit of all of it. When I'm in a new place I will ask around, but I'll also Google things like "bistro" or that kind of stuff for the area I'm staying in. Also some apps don't really work in different countries. I'll usually ask the driver that picks me up at the airport or a tour manager. Like this last time I was in Australia I had this guy David that took care of me in Sydney and he was a coffee snob. Sydney had just gotten these two really amazing coffee shops that he took me to and I was all like, "well, I'LL be the judge of that!" And it turned out his instincts were right on — the one we went to was right on par with Stumptown Coffee or Blue Bottle.

So would you consider yourself something of a coffee snob?
Well... I think of coffee more of like a drug to get high on. For me it's mostly because I like the feeling of what caffeine does when you drink it. And I figure if I'm going to drink it I may as well have something that tastes pretty good. My tendency is to just try to find the best craft people around, people that serve really high quality "conscious coffee."

I remember a while back hearing that you only eat weed and no longer smoke it. How experimental have you gotten with different weed concoctions?
You mean weedcoctions!? Yeah I've tried all sorts of stuff, especially in California. They have a great diversity, everything from breath-strip style stuff to micro-cookies, cupcakes, tinctures, fruit roll ups, or pesto and marinara sauce. You can just use it for everything and yeah, I like finding all these different forms of it. But probably my favorite is just a nice simple liquid form because that way you don't actually have to consume an actual product with a lot of calories.

Yeah a mutual friend of ours, comedian/restauranteur Greg Barris is also a big proponent of tinctures....
Yeah! He's the man. I think we ended up discovering that at around the same time. And the entity I use is Greg's favorite as well, he really just makes the best.

And now for the lightning round:

Reggie's latest CD & DVD "Why S*** So Crazy?" are available at Amazon

Watch Reggie get soulful about sandwiches at the clip from Outsidelands Fest: