As part of the Eater Lounge at the Food & Wine Classic in Aspen, we asked each interview subject to ask a question for the next person that was to be interviewed. Here now, all in one place: 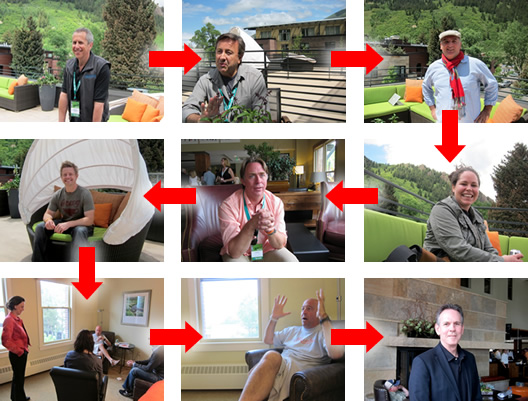 Danny Meyer to Daniel Boulud: Would you ever open a restaurant with me called Daniel & Danny?
Daniel Boulud: [laughs] I think so! I have this idea of doing a diner and calling it Paris, Texas. If Danny wants to be my partner, I think we'd do very well. I always felt, in France, we don't have diners, but we do have bouchon, or bistro — depends on the region, but generally, you can hang out all day, and it's for all generations.

Daniel Boulud to José Andrés: What do you wish for Spanish cuisine to become 20 years from now and what are you going to do yourself in America to make it happen?
José Andrés: Obviously, I will hope that Spanish cooking will have the roots that the Italian and French cuisines have achieved. I think that it can happen but we have to be a little more radical in the approach to make it happen. You're going to have to have Spanish culinary schools. None of the chefs I know in Spain want to leave—I guess they have too good of a life. I guess I'll have to train people in China, people in India, people in America how to do it and carry the flag of Spanish cuisine. It's full of traditions but it's also the home of the avant guarde. We have the most separation between the traditional and the modern. Which I think is great because one feeds from each other so well.

José Andrés to Stephanie Izard: Do you think young people like yourself are ready to handle the sudden zero to 60 stardom that comes from success on a reality show? Is it difficult to handle normal life in the kitchen once you return?
Stephanie Izard: I've been dealing with it for four years now. I wasn't ready then — they don't prepare you for the craziness of what going on TV does for your life. For me, it's important to spend time in kitchen so I can be like everyone else at the restaurant. It's fitting it in without letting it affect you too much. But, yeah. It's insane.

Stephanie Izard to John Besh: What do you think the responsibility of chefs is to give back to their communities?
Besh: I think we all have to be stewards of where it is that we come from. Giving back is something we're obligated to do no matter who you are. Chefs have so much media attention today that we can't miss the opportunity to help. We can affect big change. It's our obligation to help in our own little area.

John Besh to Richard Blais: 1. I was a judge on Top Chef All Stars that whittled down the competition to him. When am I getting a cut of the $100,000? 2. On Top Chef, it seemed you wanted to distance yourself from your southern roots. Why?
Richard Blais: 1. Hmmm. He's going to have to cook some crab cakes or make me some étouffée. Where's my et étouffée oufeee? I'm at room [REDACTED] at the [REDACTED]! 2. Hmmm, I'm not sure I agree. I live in the south. But I was born and raised in New York for 25 years. I do connect with the South now. When I first moved to Atlanta, I was a stubborn New Yorker. I hated grits and I loved polenta. Ha—they're the same thing. I think Southern Food is one of the only true American foods. I'm not just going to fry up catfish and collard greens and call it a day.

Richard Blais to Dana Cowin: 1. I'd like to know when Dana is coming by to say hello at my new restaurant in Atlanta? 2. How do you get liquid nitrogen in Aspen? Who do you have to know to get liquid nitrogen in Aspen?
Dana Cowin: 1. The last time I was in Atlanta, Richard, you weren't there. I had milkshakes without you. If you promise to be there the next time we come through town, we'll have a date. 2. [smiles] If you know the right person? it can be done.

Dana Cowin to Andrew Zimmern: If your son was going to make one thing for you, what would it be?
Andrew Zimmern: Cake because he's the best at it. It's unbelievable his skill set with it. He's six and a half. I've got a great picture of him decorating one of his birthday cakes.

Andrew Zimmern to Thomas Keller: Look how many people have come out of his family tree. What's the most important thing that he's passed on to his tribe, so to speak.
Thomas Keller: Certainly, the standards that we live by and the idea that you have to come to work every day and do a better job than we did the day before. Just that one basic philosophy has continued to help us progress. It's the idea that you have to evolve. I see that with Grant [Achatz], Corey [Lee], Jonathan Benno.