Top Chef Masters Ep. 8: Pour One Out For the Big Homie...

Share All sharing options for: Top Chef Masters Ep. 8: Pour One Out For the Big Homie... 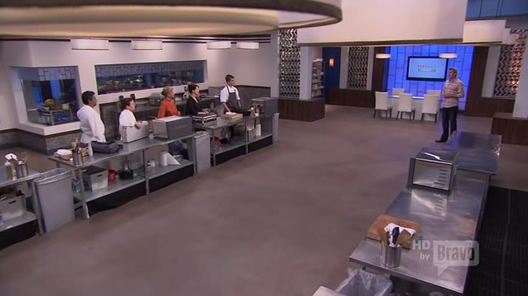 So, this week Mr. Stone appears with microwaves. I would write a SAT question that looks like this:

Thomas Keller is to Sous-vide as Curtis Stone is to...
A. Kangaroos
B. Restaurant Girl
C. Lance Bass
D. Microwave

BUT, Tone has ruined it for me and informed me that Curtis Stone can ACTUALLY cook. Yes, it’s kind of the same feeling my parents had when they realized I couldn’t math. God damn defective Chinaman baby, luckily in America, they got to try again.

Either way, Curtis Stone can cook and now the contestants are relegated to microwaves as the only source of heat. I don’t see how this is interesting. I mean, if you REALLY wanted to make bad food, you could have them cook on their taints: universally known as the warmest part of the human anatomy. I’m just waiting for the George Forman Taint Griddle encrusted with rhinestones. Only my girl, Kerin Rose, could make this look good. Make it work boo boo!

Back to business. Let’s make some taint benedicts. Top Chef gives the cheftestants some really dope microwave cookware that I’m jealous of: 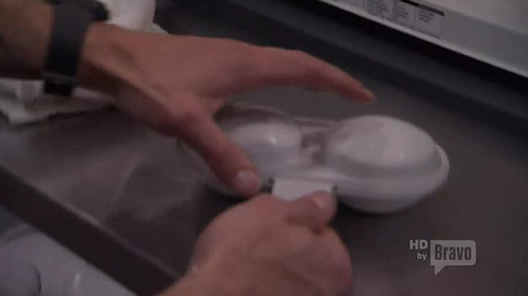 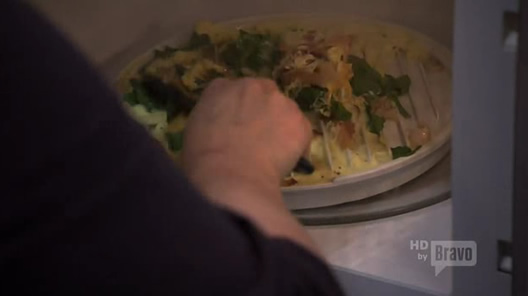 Grills, pans, egg warmers, oh my! Guest judges this week are Francis and Angela, contestants from the hit show, “So You Think You Can Oprah?” 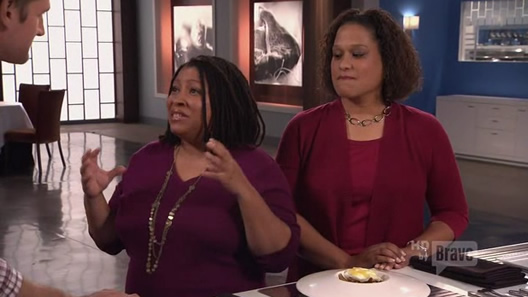 Personally, I prefer ironing my frozen foods, but these girls love the microwave. They are fucking microwave experts which makes me think they were in college for ten years. Naomi is so retarded she just couldn’t get the irony.

Don’t they teach Irony between Origami and Lunch where you’re from? I LOVED these judges. They had more swag than any other judge on the show, they were hilarious, happy, impressed by everything. It was like feeding homeless Oprahs, just delightful people trying to start book clubs. At one point they said that Tracy’s dish was reminiscent of the tropics and told Curt Stone to take his shirt off. Take notes Restaurant Girl, that’s game, he was up in the range man...

My notes don’t tell me who won, but I think it was Hugh. I had to drop a deuce so I missed that part. For elimination, each chef got paired with scientists and they’ll serve food at a High School Science Fair. 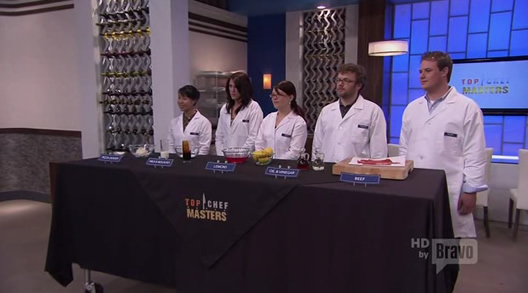 One interesting development is Hugh’s hatred for Augustine, the scientist hack he’s paired with. Augustine clearly thinks that this is his 15 minutes of fame and tries to interject himself into the storyline. Dude, you’re a human prop. Hugh goes Odin, casts down Augustine, and relegates him to picking leafy greens. YOU ARE BANISHED FROM ASGARD AUGUSTINE! Now go hang out with Tom Cruise’s sloppy seconds. 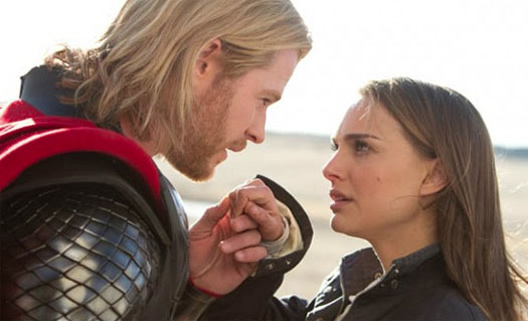 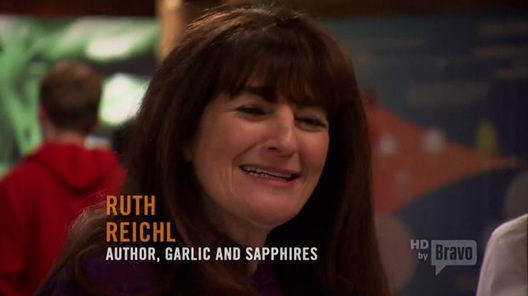 Flanked by Oseland, who shows up to a High School Science Fair dressed as the bartender from Boardwalk Empire. 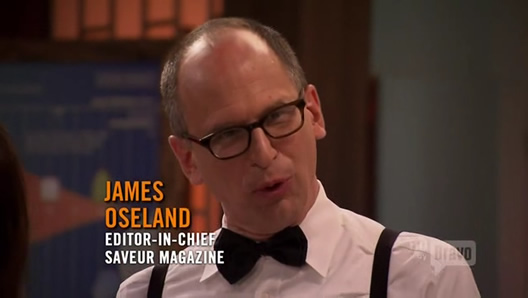 You should really put on another 50 lbs to pull of the look, homie. No one believes you can actually carry a keg up from the basement. I mean, yes, I can see you carrying Sytsma during long walks on the beach, but that kid weighs like 25 lbs. 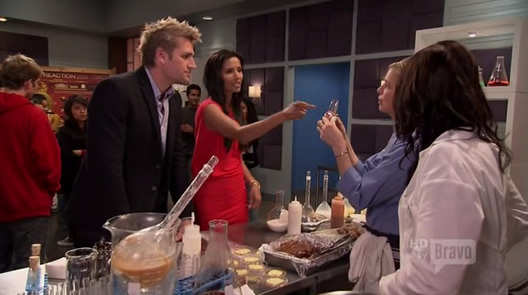 Then Padma appears with Curt Stone and something looks off. I mean, tell me Curtis, what you got in your pockets kid? Boomerangs? Coupons? NYC Condoms? You need planes, trains, and automobiles for this bird, dun! Fortune 50 and up, no games. 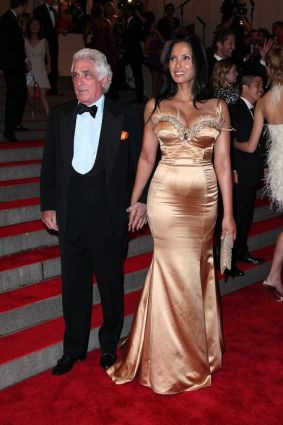 Only people like me use free condoms dude! Let’s adapt to the present company aiiittee? I know a great place on Orchard St if you need some gators.

Next up is Naomi’s table where she drops names like Salumi from Paul Bertolli, craft green olives, basically it’s the farm to table throw it in the bag remix. You shoppin’ not cheffin’. 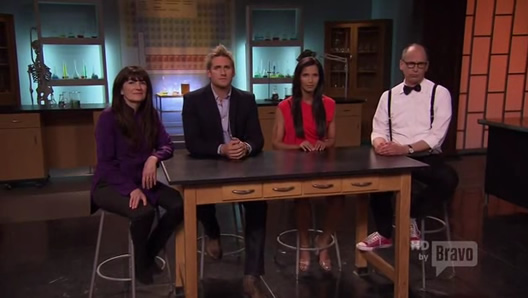 In the end, Mary Sue and Floyd are the favorites. Padma thinks it’s just an act of sheer genius to demonstrate viscosity by turning a petri dish with liquids in it. I mean, if it were up to me I would have just told the kids that viscosity is evidenced by coke drip and skipped the whole petri dish. *Light Bulbs Go Off*

Whatev, poor Floyd loses to Mary Sue again. He actually mentions to her that she’s beaten him three times. Floyd, only the strong survive. Take the L, keep quiet, and Suge Knight her in the lobby. Tonya Harding approves. She already lost half her thumb, how hard could it be? 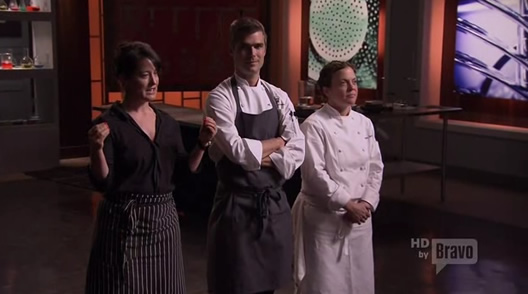 Then the bottom three: Hugh, Naomi, and Tracy. Oseland just won’t give up on Hugh’s mayo breaking down (p.s. it didn’t break down)

Oseland has such a raging hard on that I’m convinced Sytsma broke up with him before the show. Reichl then piles on, saying that mayonnaise was the obvious thing to do. Yo, you WANTED them to do demonstrations for high school kids, if it was too complicated, you would have hated that too. Reichl also shits on Tracy for not using more flavorful vinegar. I’m just waiting for a bottle of single malt vinegar to appear on the table “Mortgage your house, sell your children, and then buy this awesome vinegar on Gilt Taint!”

The judges complain about the food, the petri things, and that the dishes were obvious. Listen, these challenges blow humanely-raised goat nuts. Top Chef Masters is set up for mindless 9 to 5 robots who hate their lives to come home and laugh at people who are actually talented. Regular Top Chef, I don’t mind so much, those people want attention, they’re at a different stage of their careers, and the whole show is premised on cat fighting and ladder climbing. I like watching the peons storm the castle and get covered in flaming donkey doo doo.

But on Masters, they take these accomplished chefs and show them at their worst cooking with microwaves. It’s soma and I don’t understand why any chef would participate. I’d rather see these guys at their best. That should be the premise of Masters. You watch the show and think “Oh, these chefs probably just suck!” but they don’t. I ate at Suvir’s, I ate at Currence’s, and I can’t wait to grab Naomi’s booty at Meatopia.

You pretty mother fucker, I hated you for five weeks, but I realized it was the evil magical elves. They just didn’t want anyone to outshine Curt Stone’s marginally good looks, but they couldn’t fool me. YOU ARE THE REAL STAR. Fuck that koala jockey! Despite all their efforts to make you look like an idiot, you shone through everything, even that monobrow. I got so excited when you went ape shit on the judges that I went outside and ran 8 miles in soft sand. You were the most delicious thing on the show this season and I don’t know what I’m going to do for four weeks watching this without you, Currence, Suvir, or Mendes, but this one’s for you: