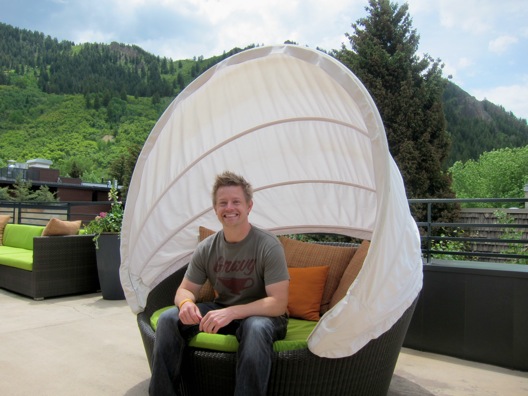 So, I know you're planning on opening something new soon?
Flip Burger Boutique has three locations. [knocks glass table in front of him] Hm, that's not wood. We're headed for DC next and then we're trying to get to Miami soon after.

After that, I'm opening a place called HD. That stands for Haute Doggery. [pauses] I apologize for that, but it's a gift to you guys. We're going to have some fun with the American hot dog, sausage, and charcuterie. It's going to open within the next couple of weeks in Atlanta.

Tell me about the space at HD.
It's a small space, about 3,000 square feet. It's in the Virginia Highlands area of Atlanta, which is a hip area. It's got a rooftop bar, it'll have a soft-serve ice cream machine, and we'll sell only beer in a can. Not full service. Dark wood. Flip's look is more pop-Los Angeles. At HD, it's a little darker. Goth, almost.

How did you end up in Atlanta?
In short: Recruiting trip; failed romance; found romance, stayed. There. I broke it down. Didn't have to tell you the whole story.

It's an amazing food scene in Atlanta. I was just down there for the food festival, and every meal we had was amazing.
It's a high B+ grade food city. I think it can compete on a certain level. You go to these places in Brooklyn — the places from Atlanta would kill in Brooklyn. I'm proud to call it home.

Your DC space? Anything lined up for that?
We do have a space, but the lease isn't signed yet, so I don't want to damage that by talking about it.

DC's a big burger battle ground now!
Well, even in Atlanta, there's nine-to-ten new places since Flip opened. The good news is there's a lot of pie to go around.

We've been asking all interviewees to ask the next subject a question. So John Besh had two questions for you. First question: he was a judge on Top Chef All-Stars that whittled down the competition. He wants to know when he's getting a cut of the $100,000.

Hmmm. He's going to have to cook some crab cakes or make me some étouffée. Where's my et étouffée oufeee? I'm at room [REDACTED] at the Hotel [REDACTED]!

His serious question was: On Top Chef, it seemed you wanted to distance yourself from your southern roots. Why?
Hmmm, I'm not sure I agree. I live in the South. But I was born and raised in New York for 25 years. I do connect with the South now. When I first moved to Atlanta, I was a stubborn New Yorker. I hated grits and I loved polenta. Ha—they're the same thing. I think Southern Food is one of the only true American foods. I'm not just going to fry up catfish and collard greens and call it a day.

Next person up at the Eater Lounge is Dana Cowin. No softball questions!
Eleven Madison Park general manager Will Guidera shots from a reclined position nearby: I'd make it a softball, dude! At the end of the day, who you listening to, Raphael Brion or Dana Cowin? [laughter]
I'd like to know when Dana is coming by to say hello at my new restaurant that I can't discuss yet. That's opening in the fall. But I didn't say that. I'm kidding. It could be winter. Or spring. Chefs say they want to open a restaurant. Doesn't mean it's going to happen. Dana, I'll see you in 2013.

So, Dana: when will I see you in Atlanta?