Andrew Zimmern on His Legacy and Hunting Jungle Animals

Share All sharing options for: Andrew Zimmern on His Legacy and Hunting Jungle Animals 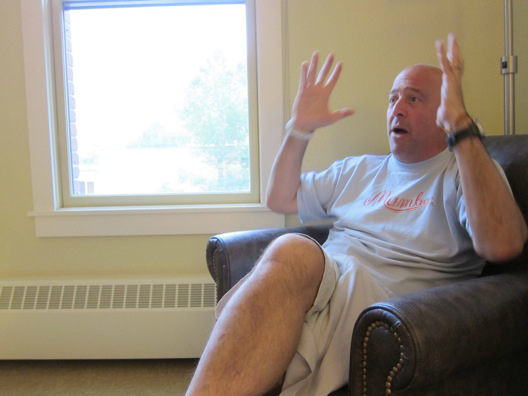 What's going on with you? Nobody thinks about these things but we have jobs and contracts. I just re-signed with the Travel Channel, which is a huge relief because it's been a month-long process. And we just got off hiatus, so I'm really excited to be making TV again. By the end of the season you just want to crawl into a hole and die and sleep for a couple of weeks.

Do you have to go from place to place to place nonstop? It's not like that but it's just as hectic. Two weeks off, two weeks on. It takes a week to make a show. You're traveling to wilds of wheretheheckistan. Then you arrive home reconnect with your family, and then ten days later you have to disconnect. No one likes to see luggage in the hallway because daddy's leaving.

Any good shows coming up? Next Tuesday night is the Suriname episode. It's northern South America, in the former Dutch Guiana. Historically, one group of slaves ran away into the jungle, and they basically established West Africa in South America in the jungle. You just don't know you're in South America. Everything is African. We lived on the river, bathed on the river, and we went on a jungle hunt with them. They're catching wild turtles, wild stink pigs.

Sounds crazy We had 25 people carry all our crap. On the way back, one of the guys falls—they're cutting through virgin rainforest—he falls and cuts himself on a rock. Deep and bad. From my chef days, I'm not freaked out by blood, but when I saw it up close, there was a lot of blood. We grabbed our first aid kit, start worrying about having to get a helicopter because we're 25 kilometers in the jungle, and the locals are like no, no, no, we don't need that. We think he's going to bleed out, and one of the guys goes into the jungle, comes back with a three-foot piece of tree, hits it against a rock, breaks it open, twists it, and juice comes out, and he puts it on his leg. He immediately stops bleeding and he literally walks out of there. And we got it all on tape.

How was filming and cooking at [Michael White's] Marea? The most fun thing about the Marea is the reservation list looks like a who's who of who you don't want to cook for during Christmas week. Like Ruth? Not just Ruth! Dana Cowin, crashing the interview, asks: Did you cook alligator? We made fusilli with bone marrow. DC: Now I don't believe in the quality of the food as much as I used to. AZ: No kidding. It really is pretty funny because every single person is so important, and the intensity level in the kitchen is so insane there, especially with first time diners, because expectations are so high. Expectations are an evil mistress.

Dana Cowin asks, If your son was going to make one thing for you, what would it be? Cake because he's the best at it. It's unbelievable his skill set with it. He's six and a half. I've got a great picture of him decorating one of his birthday cakes. 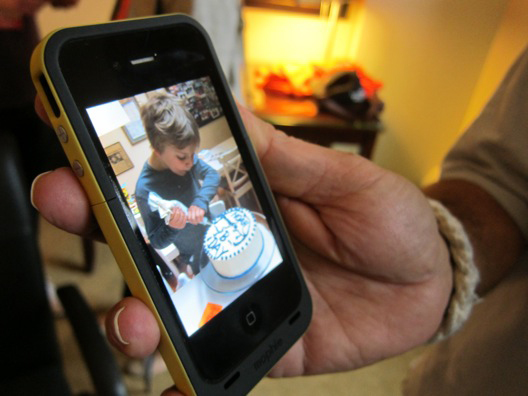 DC: What is the longest time you went without cooking and what made that time difficult: It's brutal. One season, in one year, we did 33 shows. At one point I was away from home for five weeks. Not only was I away from cooking, but I was away from my family, and it was very, very depressing. It took four of five days to reconnect with them. That was nuts. The detachment thing is a very very difficult thing.

What's the story with your restaurant Minni Bar at the Minneapolis-St. Paul International Airport? I can guarantee you that won't be the name. José Andrés — I idolize him. I don't think OTG [the company opening the restaurant] understands that there's a very famous restaurant by that name. But I'm really excited. It's going to be globally inspired sandwiches, but it's at least two years away from opening. Hopefully multiple locations. There's still a lot of water to cross.

Finally, what do you hope your legacy is? In a world that is defined by what separates us, sharing a meal with someone from a different country, showing what we have in common with the people, it's very powerful and important. In everything I do, I want people to get the message of acceptance, to learn not to practice contempt without investigation. I have an obligation to do it.

We're interviewing Thomas Keller next - what questions do you have for him? Way back in the day, I used to cook for Thomas Keller at Rakel in New York City. Keller is a down to earth, kind, supportive person, I wish people could see that. Look how many people have come out of his family tree. First question would be: What's the most important thing that he's passed on to his tribe, so to speak. Also, what's his advice to a 22-year old talented, young cook? The food world is so complex now, there' an entitlement issue. Young cooks want a TV show tomorrow.