Share All sharing options for: Dana Cowin on Trends, Real and Imagined 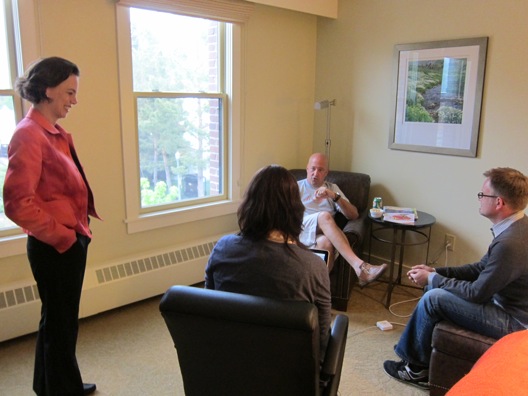 Tell me about what's new at the festival this year.
Well, first, Andrew Zimmern is being interviewed in the chair across the room! That's new. [goes over and crashes the Zimmern interview. We resume several minutes later.]

So. About what's new this year?
We switched up the wine program. Leslie Sbracco is doing Wine Jeopardy. And Andrea Immer Robinson hasn't been here for years and is pretty much a bit of a wine genius.

Another one of the fun things about the festival this year is chefs are doing things that are in their sweet spot, but do intersect with trends. José Andrés is doing vegetables. Jose doesn't think about vegetables because they're trendy. Jacques Pepin is doing eggs. He's not doing eggs because there's a poached egg on every asparagus plate across America. He's doing it believes in the oeuf. To me, that's interesting—the intersection of the classic and the modern.

Requisite media question. What's your take on the trend of celebrity covers in the food magazine world?
[pauses significantly, smiles.] Is there a trend?

We're asking everyone we interview today to pose a question to the next person being interviewed. Richard Blais had two questions for you. The first is: "I'd like to know when Dana is coming by to say hello at my new restaurant in Atlanta?"
The last time I was in Atlanta, Richard, you weren't there. I had milkshakes without you. If you promise to be there the next time we come through town, we'll have a date.

And what's your question for Andrew Zimmern, who's right across the room?
If your son was going to make one thing for you, what would it be?