Today during the Food & Wine Classic in Aspen, Eater welcomes bloggers, journalists, and food world stars to our lounge at the Limelight Lodge. As the peeps pass through, we're going to chat them up and spit out the dialogue here in this business, From the Eater Lounge. Right now: Union Square Hospitality Group's Danny Meyer. 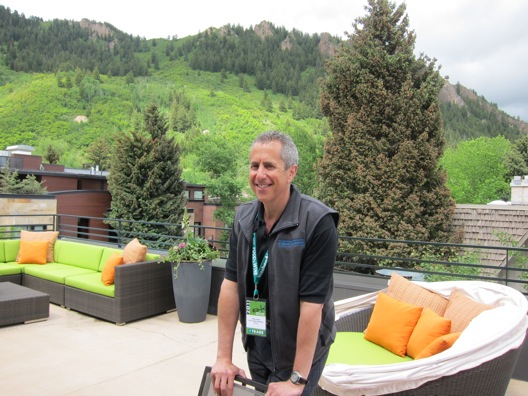 Let's talk Shake Shack first. What's next for you guys?
Philadelphia. Actually, Brooklyn. Actually, in two weeks I'll be flying to Kuwait. And Dubai. We opened in Dubai a month and a half ago. It's going remarkably well. I'll be there for opening in Kuwait on July 6. It's just stunning.

Lines there as well?
Huge lines. An incredibly diverse group of people. You see expat Americans, local people wearing burkas. It's kind of amazing. Do you think you'll expand in Middle East beyond Kuwait? Absolutely. We don't own the outlets in the Middle East. We're working with a company called M.H. Alshaya, that found us. They don't tend to create concepts; they curate retailers that they love. Work with Dean & Deluca, H&M, Starbucks, Pinkberry. And they usually won't work with anyone unless they have 25 - 50 units. They picked us when we had just one or two units, which is wonderful. They'd never come across a burger concept that they like more. They took two years to open the first one. But the minute they saw how it was doing they said, let's roll with this thing.

It's funny that a year ago today, we had two shops.

How many more are you planning?
At least five more. We'll see what happens after that. Most of retail experience in that part of the world is done in malls. We're catty corner from the indoor ski mountain.

Then Brooklyn?
Westport. Before the end of July. Each time we open a new Shake Shack, we're trying to learn something new. It's like an electromagnet that attracts whoever lives in that area — it's always different. The menus are 90 percent the same everywhere; 10 percent customized to that neighborhood. Really the people who go there are the ones who customize it. That'll be the first Shack we have that relies on automobiles to get people there. Every other is pedestrian-driven. It kind of brings Shack Shack full circle to the antecedent — 1940s and 1950s burger joints, created for the purpose of allowing people to show off their cars and hang out together. Fast food hijacked that, moving people in and out as quickly as possible.

And then Saratoga.
Yes. Saratoga will reopen the last week in July — 42-day season. It's a seasonal Shake Shack. It's half as long but almost as busy as baseball season. The racetrack opens in morning so we serve a late breakfast, lunch, and all afternoon. Races last just 10 minutes, then there's 25 minutes between races. Think about that versus baseball games and the time between innings. And then the racetrack stays open until 9pm at night. They stay and drink at bar and bet the races on the west coast.

What's the ultimate goal of Shake Shack? Will there be one in every city? The goal is to grow at a reasonable and organic pace that never outgrows our ability to be Shake Shack. This will probably be the most challenging year we will have ever had. On the basis of two stand-alone Shacks, three if include Citi Field one year ago— today, we have 12. If you just think about that in terms of human beings, it's not just stamping out burgers. It's developing the people who work there. Every single Shake Shack is run by two to four people who have worked in one of our other Shake Shacks before. Next year, on a base of 12, we will add five or six. What's interesting is that a bunch of our leaders have come from our fine dining restaurants. I don't think there's another growing burger chain that was born out of a fine dining restaurant group.

Speaking of other fine dining restaurants, what's status of North End Grill? Well, Stock just went up when Floyd Cardoz won Top Chef Masters. We're still hoping to open it by November. We're opening three restaurants in this amazing complex in Battery Park City. It is by far the first one to open and is doing incredibly well. This will be our first new Blue Smoke since 2002 — and North End Grill will open in November.

I'm so happy for Floyd. He got invitation to be on Top Chef Masters a month after Tabla closed. I think that was a really hard month for all of us but especially for Floyd. He and I went to Spain for three intense days of eating and just getting away from Tabla and thinking about North End Grill. It's in no way going to be a Spanish restaurant, but we had to go somewhere. [laughs]. We were going to be going from Spain to Great Britain. We wanted to go to the great fish capitols of the world. In my opinion, Madrid remains the greatest place to get fish in the world. Historically, all the fish that came from seas around Spain found its way to Madrid.

If Tabla had been open, would he have been able to do Top Chef Masters? He might have, he might not have. But this was a slam dunk. What's great about it is it's a great opportunity to feel great about the future.

Tabla was your first restaurant to close, correct? Did you learn lessons from that experience and apply them to the new projects? I've thought about this a lot. I don't know if we've ever opened a restaurant that was more influential, food-wise, than Tabla. In terms of allowing people to think about spices paired with farm-to-table food in a non-ethnic Indian way. One lesson is, continue to take risks. But maybe not in a 283-seat venue. Tabla's seats proved very difficult to fill day in and day out. I don't regret any ounce of the journey. I think fact Tabla went for 12 great years, is amazing. If I have one great regret, it's that I think if we'd scaled Tabla to half of the size, it would be a restaurant that to this day you wouldn't be able to get a reservation at.

Do you think you'll revive it?
I hope we will some day. I think it's really important for Floyd right now to do something new. He's an amazing cook in terms of Indian spices. But that's as if to keep Picasso in the cubist period. It's actually a gift right now.

The other thing I wouldn't mind connecting on is Untitled at the Whitney. It's an improbable restaurant, for one thing. It's the only restaurant I ever hope to do that you have to pack up each night. It's a daily pop-up. By day, we're doing a farm to table coffee shop. It's full every single day. Even though it's downstairs where Sarabeth's used to be, you don't need to pay admission. Untitled gets packed away.

The other cool thing about it is, because there's no space for a wine cellar, we only have 6 reds and 6 whites on the list. We encourage people to bring their own. It's a $10 corkage fee which is really nothing in NYC.

Do you think you'll take these concepts outside NYC?
I've leaned never to say never. [laughs]. We've been at this now for more than 25 years. I know that I cannot travel to do a fine dining restaurant. If a group of people on my team wanted to move somewhere and they wanted to open a project with me, then maybe. Sports stadiums, we can and want to do in other cities. Today, Friday, we will probably serve somewhere in the vicinity of 15,000-20,000 people at every Shake Shack. I won't know who those people are unless they call me. Laughs. I don't have to look to see how the floor is with the flowers and whether they have a favorite table. It's something simple, done incredibly well. Simple happens to be hard.