John Besh on His New Restaurant, Show, and Cookbook

Share All sharing options for: John Besh on His New Restaurant, Show, and Cookbook

With inclement weather hitting Aspen this afternoon, the Eater Lounge temporarily located to the lobby of the Limelight Lodge. Do not be alarmed. 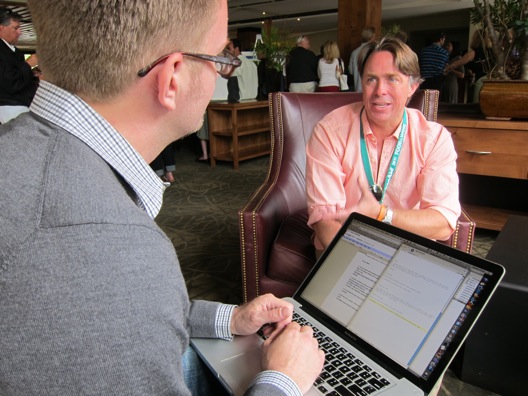 What are you doing in Aspen? I have one event today called Texas Outlaw. We'll be cooking up our Mangalista pigs and tomorrow doing a cooking event at 10 AM.

Let's talk about your soda shop in New Orleans. The American Sector is our "post-modern" diner if you will that's located within the World World II Museum itself. Down the block we opened the soda shop. We serve ice cream, handcrafted sodas, simple sandwiches — good stuff.

What was the inspiration for the soda shop? In that part of New Orleans there were a number of places where you can pop in and just eat a simple snack; street food. And we've lost a lot of that. I think with the WWII Museum, it won't exactly replicate the 1940s era soda shop, but it's our representation of it. Just as we did with the diner, we're taking our approach to food, French technique with local foods. Simple, fun, and it will tell a story of who we are and we're we're at.

What's the story behind your book, My Family Table?: It's about giving people the tools that they need to navigate a crazy busy life and have a family table. The great lessons I learned I learned at the family table. Without that foundation I don't think I would have had all the tools I have now to negotiate this world. Everything from manners to eating right. The question is, How do you find time to find time to eat something wholesome, something good? Here's a good story: My wife told me, "You will go to the ends of the earth to get the best Charentais melon for your customer, but you won't take that same approach to feeding your own children." And that changed my perspective on things.

Let's talk about your restaurant Luke in San Antonio. Luke New Orleans was a hit right off the bat. We developed it from old menus I found from downtown New Orleans 50 years ago. They all had a little something Creole and they had great brasserie dishes. There were things like matzoh ball soup. But the same sort of people really that settled in New Orleans also settled in San Antonio. There's enough cultural similarities that it actually worked. But we're sourcing from Texas: oysters from the gulf, Hill Country goat, pigs, and beef. It's really been a series of discoveries we're making.

So you have a new TV show on PBS. And at the Atlanta Food & Wine Festival, you talked about how you're done with doing reality TV like Next Iron Chef. There's this problem now that we have people more than ever viewing food as a sport. Watching these competitions, watching the world series of food, they're into it but they're not really getting involved. Too often people are just in front of their TVs eating garbage and watching as a spectacle. I've enjoyed doing TV but I feared the message was getting lost. I was just adding to the demise.

You have some people that are so food astute, and there's a class that is just watching it for fun and it's not enriching their lives. As a society we're cooking less, so we're losing a lot of juicy bits of our culture. Now it's the chef that's become the steward of our cultural food traditions instead of the family. With the PBS show, there's some integrity there.

We're having previous chefs from the Eater Lounge asks questions to the next chefs. Stephanie Izard wanted us to ask you: How important is it for a chef to give back to the community? I think we all have to be stewards of where it is that we come from. Giving back is something we're obligated to do no matter who you are. Chefs have so much media attention today that we can't miss the opportunity to help. We can affect big change. It's our obligation to help in our own little area.

Best barbecue: Holy smokes I can't answer that. How about the best barbecue that you've had recently? The brisket in Franklin [in Austin, Texas]. Bon Appetit just called Franklin the best barbecue in the country... Andrew Knowlton and I had lunch there a couple of weeks ago [laughs]... Barbecue is just one of those things where it means something to each person. Louisiana, the only barbecue we know is cochon de lait. For weddings and big times in your life you roast a pig. My world changed the first time I went to Texas' Hill Country. Because what they do to the beef and the brisket is just out of this world. I love Hoyts, Smitty's, Salt Lick, I've had some of the best pork at simple places like Interstate. Abe's in Clarksdale MS, and you have everything in the Carolinas. I have too many friends there to speak my mind about it.