Share All sharing options for: Eclectic Method Digs Variety in the DJ Booth and at the Table 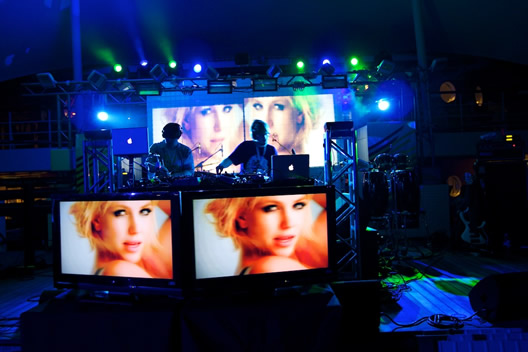 Eclectic Method are pioneers in art of the "mash-up." Picking up where remixing left off, the London DJ trio has spent the last decade intertwining music and video to create a new kind of music experience. They're regulars on both the tech circuit as much as they are in the music community, having collaborated with the likes of Fatboy Slim and U2. So the question remains: is their culinary style as eclectic as their music? I managed to catch the group's resident Epicurean, Ian Edgar, to talk Paleo diets and Brazilian mystery meat.

You all are on tour in Vegas now and I heard you recently had a rather epic dinner last night. What are the details?
Oh yeah! That was Blue Ribbon Sushi. Our manager put it together because he has a close relationship with Brooklyn Bowl, which also has a partnership with Blue Ribbon, so he set up this whole new Blue Ribbon experience for us in Vegas. It was the first time I'd ever had Blue Ribbon sushi. It was some of the best mackerel that I'd ever had and usually we all steer clear of the mackerel in normal sushi places. And once we were done with the mackerel, they deep-fried the bones and brought them back, which was strange and interesting.

So in addition to Japanese cuisine, are there any other regional cuisines you consider favorites?
I'm definitely a big fan of Japanese food but I'm more a fan of "interesting" food. Like, I'd rather have food from Mali than anything else just because I've never had food from Mali. I also love places that are run by really smart and creative chefs. But when I was younger I got really into Thai food. I got an amazing Thai cookbook written by an Australian when I was really young and just getting into cooking, and was so impressed by the massive lists of ingredients and preparations. Things like deep-frying 40 shallots in batches, getting the oil just right and all that just for a base. I was interested in complexity and weird stuff.

You guys are from London but have toured the US a ton of times, so much so you've made it your home-base. Do you have a favorite city to dine in?
I wouldn't say particularly, but I did live in LA for a long time and that's probably my favorite. I've had so much great food there. My favorite is Joe's, which I'm absolutely obsessed by! And it became by kind of "local restaurant" and when they introduced Michelin stars to LA, it got one. Only one, but still, my little local restaurant having a Michelin star was pretty amazing. And I would pretty much always get the tasting menu simply because of a deep trust in Joe. And sometimes he'd walk around the restaurant, I'd become almost star-struck upon meeting him!

As someone who's quite passionate about food, are you much of home-cook yourself?
I was, though my girlfriend in New York is celiac and also on the Paleo diet so my experiments in cooking are somewhat limited.

What does the Paleo diet entail?
Like the "caveman" diet. It's pretty much a pre-farming diet. So the idea being hunting and gathering. You're allowed fruits and vegetables and some poultry muc not much. But she's on a combination of the Paleo diet, which is basically meat and fruit and vegetables, no rice or things like that, and then she can't have wheat. So we're enormously restricted and then also she tries to have the minimum amount of oil and things like that. So my style of cooking would be like having fun with lots of ingredients like Thai food or European style like French and Italian. And of course for the latter we're not going to be happy on a limitation of olive oil, you know?

Because of the food restrictions, do you still get to eat out much when you're back home?
Well she knows I love restaurants and tries to arrange things where we can go to a restaurant that will still be interesting for her as well for whatever reason. We used to go to this pop-up restaurant called What Happens When. And each month they change the theme based on an Impressionist painting, which is the most pretentious concept for a restaurant I've ever heard. But she'll try a lot of stuff like that where we can both try something new and interesting.

As the group's resident foodie (for lack of a better term!), do you have a particular chef or 'food personality' with whom you particularly identify?
Well it's a cheesy answer and it's a very British answer? and it's slightly embarrassing! But I'd have to say Jamie Oliver. But you've got to remember Jamie Oliver in the late 90s, or whenever it was that he really broke out, he had this approach to cooking that was refreshing. Obviously the 80s were a very dark time for food, I guess there was a very pretentious attitude toward food that put people off. Whereas Jamie Oliver was ready to get down and dirty, rustic and promoted the kind of thing that Gordon Ramsay now says over and over: locally sourced ingredients, simple stuff prepared well. For example, there was this simple thing he did with a leg of lamb where he made loads and loads of holes in the lamb and pushed in pancetta soaked in lemon, garlic ,and rosemary. And it's simple, but it makes the lamb have these little pockets of smokiness and intense flavor. So yeah, Jamie Oliver... I wish I could say someone cooler!

Do you have a particular method for finding new and interesting local spots when you're on tour?
Not really, but someone once said something very smart about when you're traveling as a DJ or musician and you kind of land somewhere. You're automatically a part of this kind of musical fraternity that takes you to the interesting places. For example, every time we went to Barcelona, there would be a spread of the same seven or eight authentic local dishes.

What's the best food experience you've had on tour?
Oh that's difficult. I think consensus between the three of us is what I've heard called Rodizios and I've also heard them called Churrascarias, but basically it's Brazilian restaurants where they bring you meat on swords. And we went to one of those in São Paolo. They had the crazy Argentinian beef but then had this yellow-fatted aged piece of beef that they'd braised a little before they stuck it on the barbecue before they brought it to us on swords. And they have a little spin around the table and you have these circles in front of you that you can turn from "no" to "yes." And if it's turned to "yes," men with meat on sword will keep coming to your table and you grab a bit with tongs and they'll slice it off. I think by consensus it'd be that.

But personally, I'd say as an overall food experience I'd say being in Vietnam. The food is so different and has a weird range from apple salad to this meat that we loved but that no one at the table could identify. We kept saying, "make the noise of the animal!" And they kind of looked at each other like "hmm, I don't really know?"

Do you have any food rituals or dining requirements on the road?
Well I'm still fresh enough that I will say yes to sampling any chain restaurant I haven't been to. So I'd never had a Wendy's before the other day. I thought, "Sure I'll have a Wendy's, I've never had one." I mean I'm never going to have one again. I did the same thing with this place called WhataBurger. Our booking agent teases me relentlessly about my approach to WhataBurger, ordering the "What-a-Catch" and the "Honey Chicken Biscuit." By the way, the "Honey Chicken Biscuit" is one of the most repellant pieces of food I've ever had. So you know, I'm open to trying it all at least once.

You guys are known for as audio-visual mash-up artists, what would you say is your dream "food mash-up" or "fusion" combo?
Well, people used to ask us, "What's your ideal kind of restaurant?" In an ideal world I guess I'd say a sort of pretentious European kind of dark restaurant vibe, combined with a place like Joe's that has a vaguely Asian cross-over. So really Asian fish dishes like Black Cod alongside much more rich things like Filet Mignon on top of foie gras.

So if Eclectic Method itself was a food mash up, what would it be?
We'd probably be a sickly sweet Hoisin duck pizza.

That was quick! Sounds like you've put some thought into that one?.So now on to your round-up of favorite picks:

You can check out Eclectic Method's 'MixTapes' on Vimeo.