Anthony Bourdain on the James Beard Foundation, Ferran Adrià, and the Death of Print

Share All sharing options for: Anthony Bourdain on the James Beard Foundation, Ferran Adrià, and the Death of Print 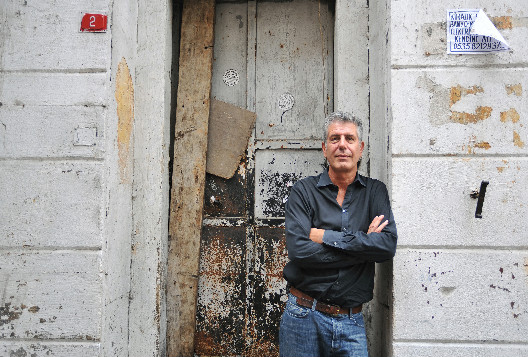 We checked in with the raconteur Anthony Bourdain recently and as might be expected, he had plenty to talk about. Here in part one of the interview, he discusses the decline of conventional print journalism, the World's 50 Best List, his final meal at elBulli, and, no surprise to anyone who has followed his Twitter account over the weekend, his gripe with the James Beard Foundation.

In the post you wrote about the James Beard Foundation, you called on the organization to "take a loud, persistent stand on the people doing so much of the actual cooking in this country." What, for you, constitutes a "loud, persistent stand?"
It just seems like a glaring omission. Rarely can one see so many white people in one room. It really does look like the Republican National Convention or the last Wallace campaign. Yet we're talking about a business that's between 30 and 70 percent non-white. It just seems to me that the right thing to do would be to show a little interest.

Especially when you're celebrating the great melting pot. It's not a fucking Benetton ad. Maybe pony up some of that money for free paralegal advice for the great number of Mexican immigrants who have been working in this business all of these years who are struggling to stay in this country and would like to do it legitimately. Just seems like there's a lot of money floating around, and I'd like to see a little of it broken off to reflect those that are actually cooking in this country.

Most of the blowback from the press on the last thing I wrote on my blog on the James Beard Foundation was about hurt feelings. You know, I was saying snarky things about food writers, it's not true, it's so hurtful. How about those Beard awards? Awful white, huh? I don't think it's representative of the industry at all. They barely pay lip service.

You recently talked about your last dinner at elBulli and how it was one of the most amazing meals of your life. I'm just wondering if you could talk about how you can be so wowed there but at the same time express a measure of disappointment, as you did in Medium Raw, about the experience at a place like Alinea. Safe to say many people would clump those places together.
Whenever you hear the word "soulful" or "food with heart," you're almost always talking about foods with familiar flavor profiles that remind people of home or someone in their past or a time or a place, and I think that what people overlook about Ferran Adrià is that almost all of the food there connects directly back to Catalonia, to Spain, to some place familiar, often through very traditional ingredients. The flavors aren't that complicated. One of the surprises of elBulli, when you see people react with shock or awe or surprise, it's because they're recognizing a familiar flavor in an unexpected place. One of the things that people misunderstand about it is that they think it's science food with wacky flavors and wacky ingredients. And it's not that at all.

I didn't connect with Alinea. It's as much if not more a reflection on me and my inability to be delighted and surprised by a chef as frankly brilliant as Achatz is. It wasn't a diss on Achatz. I didn't get the food. I'm careful to point out that he also cooked me one of the greatest meals of my life at the French Laundry. And if there's one meal on earth I'd really like to eat more than any other right now, it's the Escoffier menu. I'm positive he's awesome at it.

Any thoughts on who could fill that void once it closes?
No. Can you predict the coming of the next Hendrix? No. I can tell you that the show we shot there — all will be explained as far as what comes next for that space and what Adrià will be doing there. We shot all of it, computer graphics, a blueprint, he walked us through the area. So that mystery will be pretty much solved. But as far as who is the next anointed one? I don't think we're going to see another Ferran Adrià in our lifetime. But are there other great and brilliant chefs out there doing amazing work that may have been in some way inspired by him? Yeah. Andoni Aduriz would be one guy who will probably be getting a lot more attention when elBulli is closed. René Redzepi of course is already getting a lot of attention.

But I mean, someone like Ferran who is coming up with 52 or more completely new dishes and pushing forward new techniques every year for all those years... it's hard to imagine not only a guy like Ferran, but a combination like Ferran and Albert and Juli all existing in any reality based situation. It's a unique coming together of three extraordinary people, all of whom have once in a lifetime, truly remarkable minds.

And, while we're talking about those places, what are your thoughts on The World's 50 Best List?
The guys who put together that list all call each other and horse trade. It's good for business, it's good for chefs, but I mean, no one takes it seriously. It's not even a popularity contest, it is a list brokered by a lot of people with common interests. They're in the business — not to sound bitter because it's good for the people who end up on the list — but you'll notice that it tends to concentrate on countries where they sell a lot of Pellegrino. Michelin is about selling tires, Pellegrino is about selling water, and Zagat is about selling Zagat guides.

It seems like one of the missions of No Reservations is to shine a light on a lot of places that might deserve more attention. Over the summer, I checked out Diverxo in Madrid, which you visited. Very few people talk about, let alone know, about so many places like that.
As a nation, we travel very little. A lot of people haven't left their hometowns. I think a majority of Americans, some spectacular number, don't have passports. It's not surprising that people are not aware of that or can't afford it. I'm not surprised or disappointed by that. And I think that's the value of food television.

I'm talking more about the people, the professionals, with the budget to do that.
They are no longer the leaders. Those in conventional print journalism, in this day of shrinking ad revenues and budgets, they're not the tastemakers anymore nor are they out there in front of the websites. I kind of feel bad for them. You can actually see how someone will start talking about an experience or a trend on their website and then three weeks or a month later you'll see it in the paper. You could be sure that the Dallas Morning News or most of the major food sections are checking Eater frequently. And no doubt listing ideas.

I don't care so much about the ink as I like to see people making money. It's great when you see really good or creative restaurants doing very well in communities that a snarky New Yorker might not expect the market to support. There's a great restaurant in Minneapolis called Piccolo. Terrific. Really cutting edge, really creative food. And it's doing very well. The dining public are a lot smarter and sophisticated these days than city slickers give them credit for.

Tomorrow: Tremé, the future of No Reservations, and selling out.

For a Touch of Retro Whimsy, Restaurants Are Turning to the Illustrated Menu

After Mario Batali’s Acquittal, Where Do We Go From Here?