On Cinco de Mayo, a day that is celebrated by many with copious amounts of tequila and a taco or two, Los Angeles' Pink Taco decided to paint a donkey pink and tag it with the name of the restaurant. Because what says Cinco de Mayo more than a brightly painted animal? Anyway, people predictably freaked out (it was over 85 degrees out!) and a Facebook boycott, which now has about 650 followers, was launched.

Pink Taco has not officially responded to the uproar, but their Facebook and Twitter pages have been pulled. (As noted by vegan avenger/blogger quarrygirl, who you may remember from the Veg News non-vegan photo scandal.) Here's a video of Pink Taco ladies walking the donkey around LA, plus a cameo by the Most Interesting Man in the World: 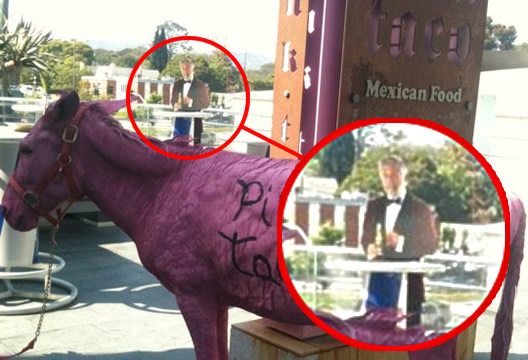 · Pink Taco Paints a Donkey Pink and Chains it to the Restaurant [OCWeekly via Gawker]
· Tell Pink Taco How You Feel! [quarrygirl]