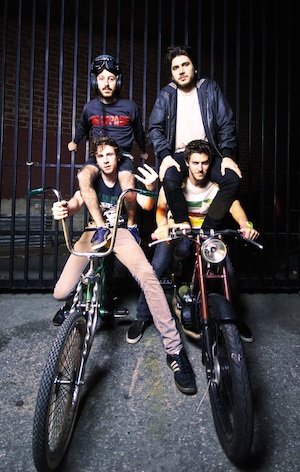 Anamanaguchi are New York's chiptune kings. And their energetic Nintendo-pop has made them staples at events like New York's Blip Festival and Toronto's Gamercamp. With jams featured in Scott Pilgrim vs. The World: The Game and even Rock Band, it's no wonder they've caught the attention of video game and music nerds alike. Heck, they even played a free show in support of the ultimate gamer-fuel: Four Loko (RIP). I caught up with founding member, Peter Berkman, to hear his take on the ultimate video game - food pairing.

Is there was such a thing as the ultimate video game / food pairing, what would that be?
Healthy Smoothies and Final Fantasy VII (seems to make sense for a game with a lot of potions I guess)...

I would've thought Four Loko would've made it in there — could you tell me about the band's noble though unsuccessful 'campaign' to keep Four Loko alive?
So basically, we were on tour when we heard that once we returned to New York, there would only be a few weeks left to enjoy Four Loko. Ryder Ripps from Dump.FM called us and told us the news. We were in Rochester, NY and as soon as the phone call happened we found a giant Four Loko sign outside a deli.

It was a sign in two ways - it meant we could buy some there and clearly it meant we had to save it. So basically we tried with all of our might with protest songs, and testimonies of how Loko had changed peoples lives for the better. But then the night we played a free show at Union Square in New York just kinda descended into chaos, with people showing their bare asses in public and people taking photos of their faces with it, which made us remember why the drink was probably being banned in the first place. But yeah I mean?.12% alcohol, caffeine, Guarana, whatever else, and its like 2 bucks!? It's pretty much a modern wizard concoction. ?Needless to say our efforts didn't really work? to keep it alive, but we still get a ton of pre-ban Loko from fans at shows, so I think it was for the best. What I really can't wait for though is Four Loko speakeasies.

You should start one! There's that 'speakeasy' in New York City's East Village called Please Don't Tell. What would be a good name for a Four Loko speakeasy?
The Chillzone!

I like the irony. Hyperactive-Drunken-Orange-Tongue-Zone probably doesn't have the same ring?
Haha, pretty much exactly. I mean, gotta mislead the feds. It's like calling Iceland Greenland or whatever.

Yeah, Greenland totally has the ice racket on lock because of that?So now that Four Loko's out of the picture, what are your dining or drinking rituals on tour?
Pretty much every day follows the same ritual. We wake up to our rice cooker playing "twinkle twinkle little star" to remind us it's time to check out of the motel we're at, and that it's time to eat some rice. Then, Ary (our morning driver/guitarist) Googles the nearest Starbucks for his 'holy iced latte'. Drives are usually at least four hours from town to town so we stop for lunch on the way usually (usually we find something on Yelp or from an episode of 'Diners Drive-Ins & Dives'). Then after soundcheck, it is dinner time where we seek out the local glory - whatever that may be. I have a personal ritual where if we see a Chick-fil-A we have to stop, but I also have a personal curse where this only happens on Sundays (when Chick-fil-A is closed).

So you cook your own rice every morning on tour?
Whenever we could, definitely.

You've been touring a lot with Peelander-Z, who is known for insanely high energy performances. Did you guys develop any tips/tricks for staying high-energy or healthy night after night?
We learned from them that owning a rice cooker is the best possible way to do touring without going crazy. They also took us to a bunch of amazing authentic Japanese markets in areas you wouldn't expect to find them in (Kentucky for instance).

What's the magic of the rice cooker for maintaining sanity?
I just means that you are guaranteed food right when you wake up instead of having to ?hunt for breakfast in the middle of nowhere??.also you can cook while you're in the van!

What are you favorite local NY places you miss on tour?
Di Fara Pizza. I missed it everywhere I went. I have ordered parmesan and basil on every pizza I had since, because of Di Fara's. It's never the same though somehow. It needs the old man Zen of Dominic DeMarco. I have thought about that every day on tour.

Also: 88 Orchard. The menu always changes so I usually get whatever's new! The rest of the USA is seriously lacking in simple chill cafes like this with awesome food where you can play Apples & Apples. Surprising but true.

Any cities you dig touring in because of the food?
Lexington, KY: Stella's Kentucky Deli. They have amazing sandwiches, but the real thing to get is their homemade jalapeño soda, it is a force to be reckoned with.

Arlington, VA/DC: Ray's Hell Burger. They have the best/biggest burger I've ever encountered. I get mine with cave-aged Irish cheddar, which is also the best I've had. Luke (our drummer) ate his in four minutes and 20 seconds, took the rest of us about 12.

Anamanaguchi started when you were still at NYU -- between juggling the band and school did you have any food vices or regular cheap eats you you swore by on campus?

Pizza Mercato was my biggest vice, I could do $3.50 for two slices and a drink all day everyday. That and obviously the Chick-fil-A in NYU's Weinstein dining hall. That's what started my love affair with the Chick-fil-A sandwich - it's the only one in the city. Got me through sophomore and junior year for sure.

What about street food -- do you guys ever indulge in street food/food carts when on tour? Do you have any favorites?
The chicken and waffle taco cart in Austin, TX [Lucky J's Chicken & Waffles] basically fueled our entire South by Southwest festival. Hot sauce, syrup, chicken and a waffle taco. That's pretty much all I have to say?.

And now for your top picks!

Best slice: The band has very special places in our hearts for Roberta's as well as Di Fara in New York. Can't be beat.
Best burger: Ray's Hell Burger, Arlington, VA.
Best taco/burrito: My personal favorite is probably Henry's Taco in Los Angeles, CA.
Best BBQ: Black's Barbecue in Lockhart, TX
Best vegetarian/vegan: We don't really eff with this.
Best sweet/dessert spot: We try to avoid dessert at all costs, I think, on tour.
Best diner/late-night: Candlelight Inn in Scarsdale NY. My favorite wings of all time. Open 'til 3 a.m. every day!
Best cocktails: Daiquiris at Gene's Curbside Daiquiris in New Orleans - we drink 'em outside in Styrofoam cups in the sun.

Check out the video for Anamanaguchi's "Helix Nebula" for GamePlay HD: