Share All sharing options for: Ruth Reichl on the Future of Media and Artisans as New Stars 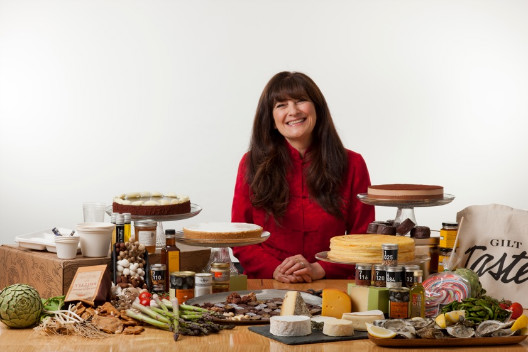 Last week Ruth Reichl invited me over to her neck of the woods, the Upper West Side, to have a cappuccino and chat about Gilt Taste, the new website for which she serves as editorial adviser. With great enthusiasm, Reichl explained how this project is representative of the future of media, how it has given her more freedom than any of her previous gigs, and how artisans and purveyors might be the new stars of the food world.

How did you come to be involved with Gilt?
Susan [Lyne] is a longtime friend, and I sort of heard about what they were doing and I was curious. I did not intend to be involved in it, but ever since we started developing Gourmet.com, I've been trying to figure out what the future of media is.

So I went over there to see what they were up to and I really liked the energy of these people so much. I was taken with this model, this marriage of content and commerce, which seems to me like the obvious next step for media. And they're a great programming platform. I was in this room surrounded by Stanford graduates who are all brilliant and are all really excited about the possibilities of how they could make this site dance.

So it was all set up and then they pitched it to you?
They didn't really pitch it to me. They were just talking about what they were doing, and I thought that this was it. This is where media is going. This makes complete sense to me. I want to be involved in it.

You mention the future of media a lot. Do you have an idea of what that future is? How exactly do you think Gilt Taste fits into it?
I don't think that there is one thing that is the future of media. There are lots of things that are happening. One thing, for instance: I think that the line between television, movies, and computers is going to be eroded, and eventually it will just be a screen. And you'll be thinking of all of those things as the screen instead of what's TV, what's online.

But I think that this model is one piece of where it's going. It feels to me as if the advertising model, certainly for magazines, is kind of broken. For years in magazines, what we've done is give the magazine away for free or almost for free in order to attract advertisers, and they don't care now how many subscribers you have. As things get truncated and divided up and they can go directly to their core consumers, it doesn't matter how many general subscribers you have to a magazine. So that model isn't working anymore.

And this one makes real sense to me. The notion of the wall between advertising and editorial: if you're dependent on sales and you only have things you are really proud of, there's no need for that wall and there's no reason to be embarrassed by saying a product is great and this is why it's great.

In a time when you have product placement becoming more and more prevalent, a model where the product is part of the media...

Is obvious and transparent?
Yeah, it makes sense to me.

Do you think print is done with?
Absolutely not. When films started coming out on tape, people said that no one would ever go to the movies again, which proved completely wrong. I think there will always be print. But do I think that there will be a continued shrinking of the print offerings? I do. I think we are in the middle of a revolution, which is really exciting. Gutenberg invented the pritning press and everything changed, and I feel like the internet has changed everything and how we see media. The landscape will continue to change, but print will always be there.

You've said that Gilt Taste isn't Costco and that it isn't a blog. How do you define it?
We're selling great artisanal products. My basic sense about where food is now is that for the longest time, chefs were the big heroes. They were the people who were making food for you, handing it over to you that we all fell in love with. And then the chefs all became big businessmen and celebrities and they had 200 restaurants all over the world. So it was hard to see them as these nurturing people who were feeding us.

Who are the nurturing people who are feeding us now? The artisans. The people who are baking and the farmers who are actually out there digging the land. To me they're the new heroes of American food. They're passionate about what they're doing, but most of them are not great businessmen. So one of the things that we can do at Gilt is provide a path to market for them. We can tell people who they are.

Who picks the products? Is it your buyer?
It's all of us together. There is no line between the editorial and the commercial. If the buyer bought some product and I hated it, we wouldn't sell it. Similarly, I am sending him notes daily: "I just discovered this great new butter maker in Minnesota, and people drive hundreds of miles to get his product. We were just out in California, and I discovered these cherries. They were the best cherries I've had in my life, and I immediately said to James [Nickerson], "You've got to be selling these cherries. They're unbelievable."

[A PR rep chimes in: Amazing.]

It's really exciting because I've never really had a way, other than on my own little blog, of saying that a product is great. To actually be able to taste something, fall in love with it, and sell it is really exciting.

You feel you have freedom.
Absolutely. It's one of the great things about the net: it's infinite space.

And when assigning pieces and acting as editor, how much do you feel you have to push the selling aspect? Do you have flexibility?
Total flexibility. Francis [Lam] and I were both really, really adamant about this point. I kept calling Susan and saying, "Are you sure you mean this?" I don't want to be spending my time writing catalogue copy. And she said she wanted to have people come for the content. If people don't buy anything, that's fine. But we want to have compelling content that is must-read.

As a test, I said let's get Barry Estabrook to do a piece on what fracking is going to do to the water supply. What does it mean for farmers? So I decided to do this right at the get-go to find out how serious they are about this. And everybody agreed that that was exactly what they wanted.

How would you defend against criticisms that the marriage between content and commerce is dirty or suggestive of a lack of credibility?
It seems so obvious to me. When you have a magazine, you get this great content that you really love, but your publisher hates everything that's serious. Every piece that I ever published in Gourmet that really meant a lot to me, my publisher couldn't sell ads into. David Foster Wallace? That's not sexy for an advertiser. I kept saying to them that they were crazy. This is a piece that people are going to save, to tear out. Any sensible advertiser would want to be in it. But they don't. They want to be in the safe pieces. In the pieces that are about how to buy stuff. Serious content is very hard to sell in a traditional magazine.

On top of that, you end up surrounding your fabulous editorial with ads for things that you hate. There is a firewall, and that means that you don't get to say a product shouldn't be sold in the magazine, as opposed to here, where we are all involved with each other. We never have something we are embarrassed about. It feels more honest to me.

As far as bringing in readers, how does it work?
This is all edited content. Which is slower than a blog. But we are posting new pieces daily, just not as many. I don't think there's anything like it. And we have the great boon that Gilt is a beloved brand. I didn't quite realize how beloved it was until every chef's kid I know called me and said "I love Gilt!" when the news came out that I was involved with it. It's amazing, especially among young people. So they already have millions of people to come to Gilt.

It's also one of the things that I find so exciting about doing something online as opposed to within traditional media. In traditional media, you think that when you start it it has to be fully-fledged. Condé Nast does portfolio and they invest 100 million or something at the get-go because you have to have something like eight months of content and a huge staff. In the case of Gilt, we will grow it with our audience, and no one thinks that on day one it has to be what it's going to be. It's a beta launch, it's going to grow organically. We're going to find out what people want. It's another way of thinking, which is exciting to me.

You're not selling cheap stuff. Do you think people who can't afford the items will still be attracted to the site?
I think so. There will be great recipes. And occasionally, no matter how impoverished you are, there's always a celebration. "I need to have this bottarga, maybe I'll get some oysters for somebody's birthday." One of the things I really love about food is that it's an affordable luxury. Most of us can't afford to go out and buy a Chanel dress, but if you want to get the best cherries you've ever had, you can get that. You don't have to be a millionaire. It reminds you that life is wonderful.

As far as the future of the site, are there any specific things you are excited about?
One day we were all sitting around talking about how frustrating it is to use our computers to cook from. Your hands are wet, they're greasy. And we oughta have some way that you can have the recipes up there and not have to touch your computer. So, for the app we are developing motion sensors so you'll just have to wave.

And it was so instant, which wasn't the case at Condé Nast, for example. When we were first discussing the idea, the head tech guy said that he knew exactly who should be handling this. The next day the man was there to develop it. And then Francis and I said, this is really great, but we really need to rethink how a recipe works.

I can do the wildest things here.