Thomas Keller on Chefs and the Modern Definition of Success

Share All sharing options for: Thomas Keller on Chefs and the Modern Definition of Success 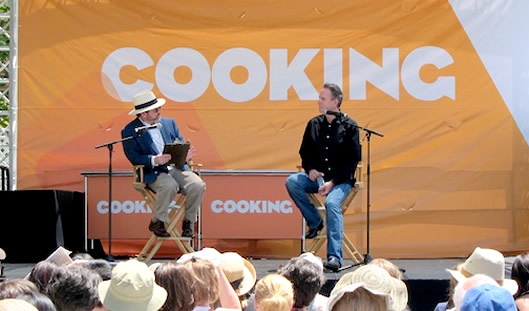 The Los Angeles Times Festival of Books took place this past weekend at U.S.C, and while this annual event is more about the authors than the food, Eater camped out at the Cooking Stage to stalk listen to Sir Thomas Keller promote his cookbook Ad Hoc at Home. As the afternoon sun broke, LA Times dining editor Russ Parsons interviewed Chef Keller on the shaded stage while hundreds sat and stood during the hour-plus discussion.

On Keller's career path: His mentor, Roland Henin, gave him his second cookbook, which was by luminary Fernand Point. (He received his first cookbook from his mother.) Keller discussed his decision to avoid culinary school, "I wanted to learn from as many great chefs as I could," though he noted that this bouncing around made him look flighty to potential employers.

Parsons talked a bit about how successful people never expected to get as far as they did, and Keller went off on that note, "How could you think you'd be where you are? No one [his contemporaries] did, you just hoped for your own restaurant so that you could continue to do what you love."

Parsons pushed Keller to admit to being less of a chef and more of... what? A businessman? A restaurateur? Keller seemed perplexed for a moment, and said, "The better you get, the further you get from what you originally fell in love with... but then you're able to help that next generation achieve their goals." He related a story of when he realized he wasn't really the chef in his kitchens anymore: "I was that person [chef] at the pass from 1994 to 2005, when we opened Per Se. My life changed when I realized we had to have a chef de cuisine and I went back to the French Laundry and someone was standing in my spot and I didn't know what to do."

On being a chef today: "What we have to deal with as chefs is much broader than the last generation." Keller noted that Charlie Trotter, Wolfgang Puck, and Alfred Portale were some of the first American chefs to also own their own restaurants. But today's chefs write books, fill their calendars with speaking engagements, events, cooking demonstrations, sponsorships, and the like.

"Why do we do it?" Keller asked, "I'm not sure, I've been trying to figure it out for quite some time. How come I'm not in my restaurant? Why am I sitting here talking to you?" Keller mused that the public demands of a chef today is for something far greater than what they can do in a restaurant kitchen.

Parsons wanted to know if Keller would do any more television: "I did one with Tommy Colicchio, but you have to ask yourself how does it affect the restaurant? Cooks today are looking to us for the definition of success."

And finally, on success: "It's not about fame or fortune... Success is about memories, it's about creating memories for yourself, for others."