Share All sharing options for: Josh Ozersky on Meatopia 2011 + A Ticket Giveaway 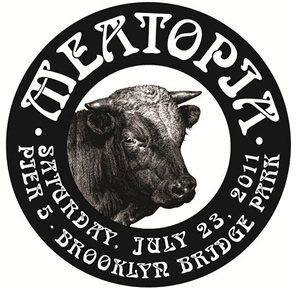 Tickets range from $85 general admission, to $130.00 "Carnesseur" (unlimited beer), to $195 for "Meat Elite" access. In addition, we're doing a giveaway of five general admission tickets to the event. Details of that contest are below. But first, a quick interview with grand Meatopian Josh Ozersky:

Who's someone on the lineup that people might not know?
The one that I'm most excited about that New Yorkers might not know is Sean Brock. I still haven't been to his new restaurant, but I think of Sean Brock as one of the most exciting meat talents in America and may be the future direction of American cooking. He's certainly the crown prince of lardcore right now, there's no doubt about that.

I'm excited about getting Naomi out and the Animal boys. One chef who I think nobody really talks about in Portland — you talk about Portland you usually talk about Gabe Rucker from Le Pigeon and everybody loves Naomi and her foxy sous chef Mika, but there's a guy named Adam Sappington, and he's a true, true master of American vernacular cooking. He's gonna do a pig head butchery demo at the French Culinary Institute for the students, something that they'll never forget. He made me what might have been the greatest fried chicken meal: Fried chicken fried in beef tallow and served with martinis.

Can you talk about specific dishes that people are doing?
I can't give them all away. But I have April Bloomfield on whole hog duty. I don't believe April has cooked a whole hog in a smoker before, so it's kind of a historic occasion for that. Robert Newton, Seersucker — I'm on a lardcore kick, I'm really kind of smitten with Southern food — Robert is making whole quails glazed with bacon fat and sorghum and served on a salad with sweet corn and watermelon. Aaron Sanchez is doing whole spicy Mexican goats on spits.

And there are farmers involved with Meatopia?
A few people complained last year that, "Oh, Josh Ozersky said that this was gonna be a celebration of small farms and heritage meat, and a lot of the meat was supplied by the LaFriedas," or whatever. It was a legitimate criticism and one that struck me keenly, and while it's impossible to feed 3,500 people all you can eat on heritage animals on small farms... I would never dream of asking the farms to donate the meat — almost all of them I'm buying the animals from — all of it is going to be completely all-natural, hormone-free, antibiotic-free, and humanely treated.

Seamus Mullen hooked me up with a guy — a place called Tamarack Tunis Farm in Vermont — he has these beautiful little lambs and goats. And the American Lamb Board is involved, they have a confederation of family farms in Colorado. I have The Piggery in Trumansburg, New York, which does some really beautiful animals like large blacks and some other heritage breeds. And this year Bev Eggleston of Eco-Friendly foods in Virginia, is going to continue his duties as the grand marshal. Which means that there's gonna be both his beautiful Ossobaw pigs as well as a new kind of rose veal that he's trying to develop that's a much more humane form of veal that world has ever seen.

The farmers are actually there, it's not just a sign that says the farm that it's from. The farmers are going to be there standing next to the chefs so people can ask them about the animals, what they ate, where they lived, what their lives were like, and really know what it is they're eating. Even the larger companies like Creekstone and Hatfield that are gonna be helping out with some of the other chefs who aren't paired with farmers, there's going to be representatives there to talk about what it is they're trying to do and how it is their stuff is being developed.

Our presenting sponsor is Whole Foods and they have this whole five-step animal welfare system that they're rolling out. And that's something that I believe in a lot. Because you know, I love animals, both when they're alive and when they're not alive. And it's very important to me to know that nothing horrific happened to them. And that's where Whole Foods is coming from and that's why they were a natural partner for us as a sponsor.

And how is this event going to be different than last year?
You remember last year, to get to the event you had to take a boat for which there was a long, interminable line. And it was a great hardship to get there. It was also quite hot. Being fat and hairy myself, I was especially sensitive to the part about being hot. And being impatient, I felt bad that anybody would have to wait in line for a boat. So we decided to do this on the Brooklyn waterfront.

The other and more important difference: I hired the best culinary events production team in the business, CREaM, they're the guys that do the Rachael Ray Burger Bash and some of the other events at SoBe. Whatever you may think about the Burger Bash or Rachael Ray, that event is run with military precision, and that's what I wanted for Meatopia. I don't want anyone to wait in line, I don't want anyone to run out of food. There are some things that are inevitable: April Bloomfield is making a whole hog, and not everybody's going to get to eat it. But in so far as super-professional management, experience, careful foresight, and a detailed plan of attack can help make an event run well, Meatopia's going to run well.

Is there a theme this year?
You know what? There is no theme. Meatopia is so vast and encompassing that I basically needed to include the entire animal kingdon. Every species of animal, every part of the animal, at every stage of the animal's life. At least, theoretically.

You know how people talk about vegetables being the new meat — is there going to be a Veggietopia in your future?
That will happen when I move to Moscow and join the Soviet Union. I would sooner become transgendered than do a vegetable fest.

The Lineup for Meatopia 2011

Send your answer to contests@eater.com by June 8th at 10AM EST. The question:

The greatness of meat is in its essential weirdness: it is asymmetrical, complex, sinuous, mysterious. There is no block of "meat" for a chef to work with; rather, it's a whole complex of muscles and tendons and fat and bone, the very elements of life itself. A real meat lover is therefore a myologist, an anatomist, a fetishist of physiolology. So tell us, not what your favorite meat dish is, nor your favorite meat, nor even your favorite cut of meat. Say what is the best part of the part you love the most, and please say why, with a loving and lingering description.