Javelin on the Dangers of Hunger and Eating at Gas Stations

Share All sharing options for: Javelin on the Dangers of Hunger and Eating at Gas Stations 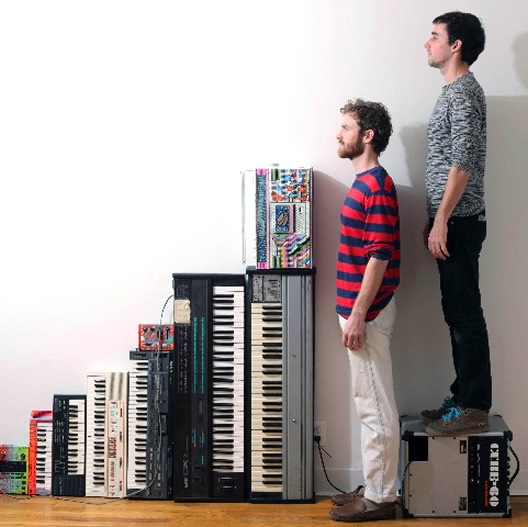 Experimental pop duo Javelin may not be a household name, but their unique blend of synth-hooks, improvisational vocals, and a wide variety of samples has caught the attention of a lot of people, having been deemed a band to watch by Pitchfork Media. Javelin's two members are cousins Tom Van Buskirk and George Langford who started creating their electronic disco-doo-wop amalgam in their hometown of Providence, RI before relocating to Brooklyn, NY. They've toured with acts as varied as psychedelic jammers Yeasayer and New Orleans' "Bounce" Queen, Big Freedia. I caught up with Tom while on tour in Washington, DC to discuss his mayo-obsession and to invent a little new food-slang.

So you all are originally from Providence, RI — what are some of your hometown haunts?
Providence is actually a pretty big restaurant town, there are a lot of nationally-ranked restaurants there. But my favorites? a lot of them aren't around anymore, but there's actually a great pizza place there called Bob & Timmy's Pizza. It's really unassuming but they do California-style pizza and it's really great.

I mean I love a lot of different kinds of pizza, I'm kind of a pizza lover really, but there's something special about the way they do the crust. There's also an Indian place called Not Just Snacks and they make really good home-cooked Indian food. When they started it was pretty much just like going into somebody's kitchen and the food they made was pretty much just home-cooked style. I really like the way they do their Chicken Masala.

Do you guys have any peculiar food-quirks on the road?
Neither of us are vegetarian or vegan but we tend to request vegetables from venues because when you're touring it's pretty grueling food-wise. The healthiest option in most of the Southern US is Subway. So we request carrots and hummus as much as possible. Actually one time we went to Walmart to shop for food and we got guacamole dip. But we should've paid more attention to the label because when we opened it up there was this green food coloring on top that hadn't been mixed in yet and it was just sitting on top of this white paste. It was pretty gross.

Have all your food experiences in the South been lacking in good finds?
Well I mean I love barbecue, and a lot of the places down there are just incredible so I wouldn't say lacking. But I mean when you're used to the coast, you're used to be able to go to a nice supermarket and there isn't always the same option in most of the country.

So if you dig Southern barbecue, where have you found the best?
Oh there's this place in Atlanta called Fox Brothers and oh my god it's so insane! The beef brisket burger! I was warned by my friends about this thing. They said if you are a meat-eater, this thing will turn you into a wild animal, like as soon as you start eating it you have to finish it and no one will get in your way. You start elbowing people around and giving people dirty looks like "GET AWAY FROM ME!" I've never had barbecue that good!

A lot of people have a rule that when they are in certain parts of the country, they'll avoid certain foods. For example, if you're in a land-locked spot in the Midwest, some folks avoid seafood. Do you have any similar food rules for the road?
We actually had sushi once in Memphis, TN like idiots. It was really not good. But as far as personal rules, I stay away from the white gravy. I mean I will eat it if I have to but it freaks me out. It's whitefish grey and I know some people say it's the best kind?..

Do you have any favorite cities to tour in for the food?
Well, right now we're in DC and there's a great Ethiopian neighborhood here, right now we're on 9th and U Street, and I always look forward to playing here because it's so good. I love Ethiopian food. Los Angeles though is probably my number one. There's this one burrito place called Hugo's and their Mexican street food is so good. I love the pineapple and the salsa, it's just really amazing everyday concoctions that the people there are completely used to but they're just so good.

When you are on touring places where you can't find much healthy food, do you have any rituals or secrets for not getting run-down?
Hmm, pray to the East? No, just kidding? I mean I can make do on not much. I can go into a gas station and pretty much assemble a meal out of just drinks and snacks if I need to.

What does your typical truck stop meal look like then?
I would get coconut water for sure if they have it. Then if I'm actually hungry, I'd look at their hot dog selection or pizza selection, and if they don't have any of those I'd think about getting a pack of Combos because they have a decent amount of salt. But of course I'd check out the trail mix section first and cashew and raisins and that kind of stuff.

Oh man, Combos are a blast from the past. Okay, important question: what is your favorite kind of Combos? I am partial to the pizza flavor.
Yeah! Those are my favorite — like little pizza pretzels!

An excellent choice! So when you are home do you cook often or do you eat out for the most part?
I moved away from Brooklyn recently, so I have no choice but to cook for myself lately. I've been enjoying it quite a bit. But when I lived in the city, I'd eat out pretty regularly, kinda hard not to.

What part of Brooklyn were you in?
Prospect Heights. And there was this great restaurant there called The Islands that was on Washington. You could get a huge vegetarian meal that two people could stuff themselves on and still have leftovers and it was only like ten bucks. It was so good, very home-cooked meal kind of feel. It was a Jamaican/Caribbean joint.

So where are you living now?
I moved upstate, so in food terms I live near the Moosewood Restaurant made famous by the cookbook. It's near Ithaca, NY.

So now that you're cooking more often, do you have a specialty?
Well I kind of make sort of improvisatory things. This is kind of strange but really I'll make a sort of dressing for a different starch and really focus on the flavor. I'll end up putting whatever that is onto rice or noodles or something. I'll improvise, like I'll caramelize some onions, throw some walnuts in there, then think 'well maybe I'll splash some balsamic vinegar in there and reduce it a bit or maybe I'll throw some goat cheese in there and melt it."And then I'll throw it on some cous cous or something. I'm sort of a novice cook I guess.

I read an interview you did recently where you talked about your love of mayonnaise as a kid.
Oh yeah! Mayonnaise and milk!

Are you still a big mayo-lover?
Yeah I still am and I recently had home-made mayonnaise for the first time and it blew me away. When you taste what it's actually supposed to taste like before Miracle Whip and Hellman's took over, I basically just wanted to eat the entire cup of this stuff. I'm sure George would say the same thing because I used to hate mayonnaise, but they always had it at his house and they'd slather it on sandwiches. It used to gross me out but now I'm all for it.

He was your mayo-pusher, really.
Ha, yeah. I don't really have a particular brand of mayo I usually have, but I think that if I were going to buy mayo at the store then I'd have to get whatever kind has all the fat in it. Like Hellman's 0% fat reduction. But I'm telling you, that home-made stuff? whew. I may never buy it again if I can learn how to make the home-made stuff. It's just so good. Milk though I haven't really gotten back into. I've been on the soy milk tip for a while now and I've pretty much cut real milk out.

Are you one of those dudes who puts mayo on his fries? (very European of you!)
Oh yeah totally! I like to mix everything together — fries, ketchup, and mayo.

In that same interview, you talked a lot about candy and other snacks. What would you say is your typical stockpile of road-snacks you have on tour?
I usually like a lot of nuts because I need a lot of protein. I mean, we're both pretty skinny guys and we have this intense hunger alert. It's basically when you're so hungry you're angry, you become hangry. It happens very fast to us, hanger descends upon us and we need something substantial fast.

Nuts are a pretty healthy alternative. Outside of the occasional bag of pizza Combos, do you have any guilty pleasure or food vices on tour?
I have HUGE food vices. I mean love bacon? actually I guess I don't really have any food vices because I'm pretty proud of all of them. I never have any regrets? I mean I guess you could maybe say that I'm not proud of something like Combos. But if I took a religious approach to food, it wouldn't be Catholic because I really don't have any problems indulging.

No repenting necessary! So finally, you guys fuse a lot of different musical influences, styles and samples. If Javelin was a food or meal what'd ya be?
Well our label rep once described us as "clam chowder spilled on Canal Street," So I guess that's what we are, pretty disgusting!

And now for our lightning round!

Best burger: Fox Brothers in Atlanta, GA
Best diner: Nick's in Providence, RI
Best pizza: There's this place around the corner from the IFC Theater in New York called Tom's that was consistently good but I'm growing fond of this deep dish pizza that they have in Ithaca from this place called The Nines. It's delicious and their crust is almost like pastry, it's really sweet and fluffy. Which is weird because thin crust pizza is usually my favorite.
Best taco or burrito: Hugo's in Los Angeles, CA
Best coffee or tea: Gorilla Coffee in Brooklyn, NY
Best bakery: Babycakes in New York, NY
Best cocktails: Fort Defiance in Red Hook / Brooklyn, NY