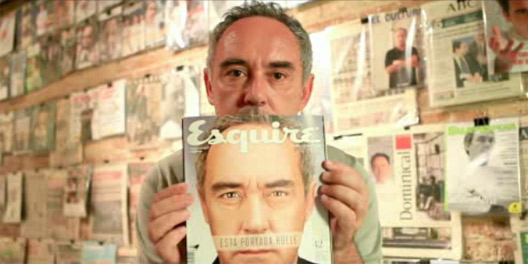 Esquire Spain announced that chef Ferran Adrià will grace the cover of their June issue. Oh, and that that cover will also be scratch and sniff. Following a meal at elBulli, editor Andrés Rodríguez came up with the idea of making the cover smell like the area in which the restaurant is located (the town of Roses, in Catalonia, overlooking the bay of Cala Montjoi).

So he and Adriá enlisted the help of "chemist, aroma creator" and frequent elBulli collaborator Dario Sirerol to make it happen. The resulting sheet, when rubbed, should smell of eucalyptus, pine, and the Mediterranean sea.

"It's wonderful we can always have a memory," said Adrià. "A little piece of elBulli, its smell." Here's a video of Adria talking about the project: