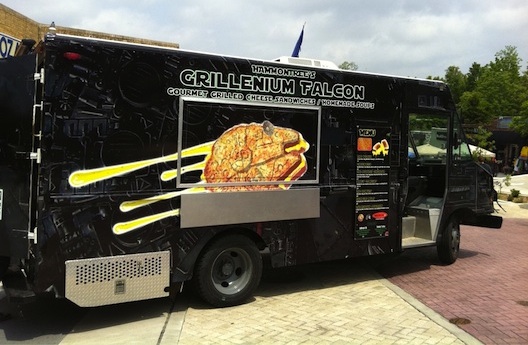 Behold the Grillenium Falcon, a food truck from Fayetteville, Arkansas which features the best food truck art we've seen since Jack in the Box plastered the side of a van with some serious 70s-style van art.

Run by Fayetteville's Hammontree Take Home Gourmet, the truck features a selection of sandwiches from the cafe, most of which have punny movie-themed names like "Jack to the Future" and "East of Edam."

On the menu: a sandwich called the "Cheebacca," which is sharp white cheddar, a house cheese, bacon, pulled pork, grilled onion and garlic cilantro sauce on sourdough. They also serve soups and salads.

The Grillenium Falcon just launched this weekend, but we fear its days may be numbered. As one commenter put it, the truck may soon be called "The Grilled Cheese and Desist" — George Lucas is notoriously tight-fisted with Star Wars licensing rights.

Just make sure to put all power to the front deflector shield as this grilled cheese could end up on your lap.