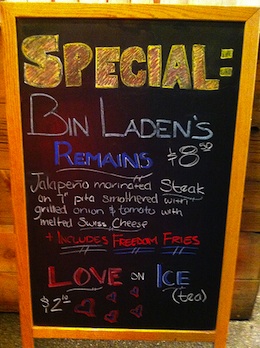 Osama bin Laden has died, and some restaurants are celebrating the news by offering drink specials. Diners in Dallas are even making reservations at upscale restaurants for celebratory champagne dinners! Here are a bunch of Osama bin Laden-related deals across the country:

1) Pix Patisserie in Portland, Oregon is offering half-off glasses of champagne all day today (May 2).

2) Cincinnati restaurant owner Jeff Ruby is even giving away a free glass of champagne to each guest at his steakhouses through Friday "in honor of U.S. service members and Osama bin Laden's death." (You may remember Ruby as the guy whose floating restaurant broke free of its moorings and floated down the Ohio River with over 80 customers on board.)

3) Although they don't specifically mention which dead guy they're talking about, the Beer Bistro in Chicago is offering free Dead Guy Ale "while supplies last."

4) Another Chicago bar, Uncle Fatty's Rum Resort, is throwing a full-fledged party on May 6 and 7, complete with specialty cocktails like "The Floating Terrorist" and "Osama Been Shot." (The parties happen to coincide with their already-planned three-year anniversary parties.)

5) Here's a non-alcoholic special: Seattle's Candi Shack has their drip coffee for a dollar a cup with an "Osama bin Laden Shot in the Dark" special.

6) Chicago's Filter is offering something called Bin Laden's Remains, which is jalapeno-marinated steak on a pita with grilled onion, tomato, and Swiss cheese for $8.50. It comes with Freedom Fries, obviously.

7) The New York Daily News would like Obama to rot in hell...and to give you a free sub!

Know of any other restaurants offering bin Laden specials? Do let us know.