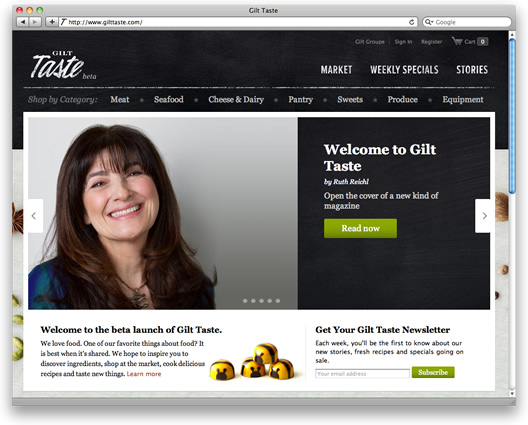 Gilt Taste, the food version of Gilt Groupe, launched last night with Ruth Reichl as Editorial Advisor. Francis Lam is on board as Features Editor and Melissa Clark as Contributing Editor. It's an online marketplace/"interactive magazine."

It's all artisanal, luxury products for sale: seafood (think: caviar), meat (steaks go up to $199/lb), cheese (from Murray's Cheese), vegetables (including ramps!), spices, chocolate, what have you. (The subtle animations on the category pages are a nice touch, though.)

Calling it a "new kind of magazine," Reichl described the website as "a radical venture." She wrote, "We don't just want to sell you great products—we want to tell you the stories of the people who create them and inspire you with delicious new ways to use them."