Share All sharing options for: Tanlines on Bagels, Bibimbap and Clandestine Cider 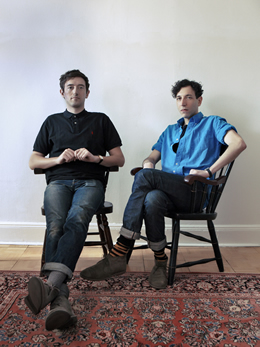 As we prep for picnics and piña coladas, it's only right we chat with the New York duo Tanlines. After all, their infectious brand of synth-pop meets world-music is a guaranteed recipe for summer vibes. Tanlines' Eric Emm and Jesse Cohen came from varied musical backgrounds to develop a style just as fitting in a Caribbean dancehall as a sweaty Brooklyn basement. In fact, it's made Tanlines the favorites (dare we say heartthrobs?) of indie hubs like Pitchfork, The Fader and Seattle's KEXP. I caught up with keyboardist/percussionist, Jesse Cohen, to talk about bagels and surrealist baking literature.

You guys are from New York, what are your favorite local haunts?
When I lived in Prospect Heights, I used to go to El Gran Castillo de Jagua every Sunday for chicken and rice.  Recently, I've been really into this Cuban takeout place a couple blocks from my house in Brooklyn called Pilar.  I've also been meeting a group of old friends about once a month at New Yeah Shanghai Deluxe in Chinatown for several years now. They recently mysteriously changed their name to Old Sichuan.  I also like Murray's Bagels for coffee and also bagels.

Most people consider NYC the mecca for great food, but when you're out on tour what cities have had the best the food?
We went to Europe a couple times last year and returned to a couple of places each time. We try to treat ourselves to good meals whenever we have the chance and we like the idea of 'having a place' in a bunch of cities. In Amsterdam, there is an Italian restaurant called Firma Pekelhaaring we've been to a few times that's really good. They have a clandestine cider that's not on the menu that a farmer delivers to them, at least it is according to the waitresses — they're happy to share that info with you, it's not a big secret. It was very strong! We've also had really good food in Montreal, Paris, Salzburg, Victoria, and great breakfast at every hotel in Scandinavia.

What about food carts — ever indulge in mystery street meat on tour?
Once had a really good herring sandwich out of a food cart in Stockholm.

Do you have any dining rituals for before/after shows?
I think we're into the idea of routines and having a place that's "ours" in a bunch of cities, but nothing special. We used to go to Snacky's in Williamsburg and have bibimbap and sake before playing shows in Brooklyn. That was a very early Tanlines food-ritual.

I like to try the stereotypical food of city, like the kind that would appear on a postcard of that city. In Glasgow, I made sure to have smoked salmon, haggis, and scotch, for example. We've also tried Jewish delis in five countries.

Describe your best food experience on tour.
The best place we ate at our whole first tour of Europe was probably Cafe Savoy in Prague, which is kind of a spruced-up yuppified old school Czech restaurant. We had borscht and schnitzel and it was so good, we came back the next morning for breakfast. We actually had a ton of really good/bad/memorable food experiences on that tour.

Do you have any tips/tricks for staying healthy night after night?
I'm a big fan of making the second meal of the day the main meal and having a light dinner. Though Eric has several systems in place that I'm not qualified to discuss.

I recently interviewed a band that swore by bringing their own rice-cooker on tour. Do you have any food quirks on tour or specific dining requirements?
No, not really. We're always looking for yogurt, pretzels, and seltzer though. Those are some of our staples.

It's almost the indie artist right-of-passage to work in food service at some point. Have you?
The summer after ninth grade I got my first job, which was at a bagel factory. It was a huge industrial bakery in an industrial park that made the "fresh bread" that you see at the supermarket or at Costco. It was a crazy huge place that ran all night long with huge machines with conveyor belts and gigantic dough-kneading machines. It was like In the Night Kitchen meets Charlie and the Chocolate Factory, except it was a sad place populated by a very tired and mostly-illegal workforce.

On the weekends, they would open the doors and let people come in and buy bagels by the dozens practically right out of the oven. I was one of the kids that they paid $5.00 an hour to bag bagels all day starting at 6:30 a.m. I was really happy to have a job and to be making my own money, but it ruined bagels for me for a while. Also, the boss had a five CD-changer playing all day and NEVER changed the CDs. I remember that there were a few Dicks Picks albums, "Legend", and Eric Clapton Unplugged.

And now for the lightning round of deliciousness!