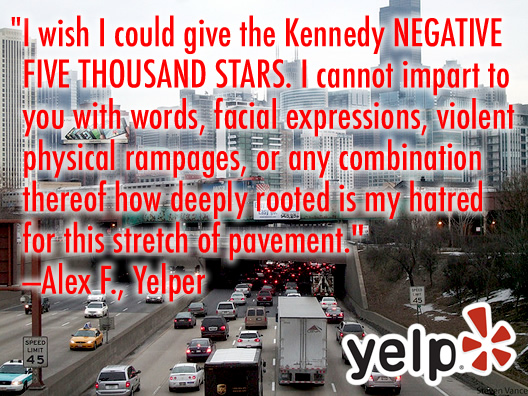 Yelp is a good place to find out what Yelpers think about restaurants, dry cleaners, or veterinarians — note we're not saying the reviews themselves are thoughtful or useful — but there's a whole other side to the review website in which Yelpers vent and gripe about pretty much anything. From people complaining that their local gas station doesn't carry their preferred brand of condom, giving a bad rating to a highway because people are bad drivers, to criticizing their local police precinct, Yelpers just can't help themselves. Here now, ten of the most unexpected things reviewed on Yelp:

Some Yelpers have helpfully noted matters of ambiance, including casual mentions of the instances of graveyard antics: "There was one time when I heard voices and followed it, but it was just two people having sex." Others simply vent their peeves about the city's final resting places: "Why can't I go for a run here? For living in such a shitty neighborhood (south park slope), you think this would be the perfect place to go for a run."
[Photo]

Yelpers don't just eat like animals, they're beasts at racing, too. From the BP MS 150 in Texas to the NYC Marathon, these critics have been there and done that. How else would you guess that worst parts include"the post-race trek out of Central Park... the port a potties had no TP" or that the lottery systems suck? As one user put it, "Little did I know, marathons are not boring at all!" Once again, Yelp to the rescue! [Photo]

Gas and go? Oh, no! Much like gas stations themselves, the reviews range from helpful to slightly sketchy, like this one of a Shell station in Houston: "I don't have a car, but I do a lot of business here. Ofttimes when I'm running a little late to wherever I'm going, I'll grab a sandwich from this place - sandwiches that are always fresh." Whatever business this Yelper is doing at the gas station, at least he has taste. For Brooklyn residents, gas might be low on the list of review criteria: "The only drawback is that they didnt sell Trojan products (when youre [sic] stopping here for doms late night, you need the max Trojan protection)." Leave it to Yelp to tell us about the important things. [Photo]

Tourist locations are no surprise on Yelp, but reviews of buildings that don't even have visitor accommodations? A little odd. Especially when you leave comments like this one about NYC's Flatiron building: " 'Come over here and give me a hug' she seems to say. (Im pretty sure its a girl building)." [Photo]

If you have to commit or be the victim of a crime, what's the best precinct to do so? Most people might not strategize, but Yelp is here to help us all. In NYC, seems the Queens neighborhood of Forest Hills is the place to go for helpful cops: "Wonderful police watching out for our neighborhood! They will come and check your house for things to change in order to avoid being a crime victim." Brookyln's 78th Precinct may be another story, though. According to a Yelper who got ticketed on the subway, "The cops said that we were out of luck. They had to reach a quota. They also said that people could get away with murder in brooklyn." [Photo]

Healthcare professionals are a staple on the site, but this review held some...unique insights. There's nothing like the reassurance of a Yelper when it comes substantive commentary on reproductive health: "Best pap smear ever." Some of the reviews get a bit uncomfortable, but there are also valuable insights such as, when it comes to abortion services, "The people in brooklyn are nice but in the manhattan office, i had the worst experience ever!" File this under "official warnings signs of critiquing way too much online." [Photo]

Speaking of the boroughs, amateur critics have attempted to review all of Brooklyn in a single go. Talk about aiming high! Some keep it short and sweet: "A nice borough, but it ain't got **** on Queens (especially when one factors in all of the unwanted hipsters)." Others denoted the pros and cons, such as "If my jean isn't TIGHT, I am not hip enough to be or live this borough ? Pah lizz !" Indeed. Check yourself, Brooklyn. Yelpers are watching. [Photo]

Bet you didn't even know people could exclusively photograph pets, did you? Oh, but they can — which means Yelpers can critique them. These are no simple pet photos: "I am always amazed at how well she captures the relationships the pets have with the owners, it's like she has a magic lens!" Through this photographer's magic lens, pet haters are even converted: "Whether that story is about a journey through Mexico or a obsession to play 'catch' with an owner, I see it. I used to dislike animals but after seeing them through Grace's eyes, I fell in love." Creepy? A little. But, clearly, we at Eater loves us some cute puppy photos. [Photo]

When you ride public transportation, we bet your focus is on your destination, right? That's why you're not a Yelper! And what would we do without reviews like this one, about LA's DASH system, "In a perfect world, you'd run past 6:30pm, but c'est la vie. I still love your clean, spacious buses and darling drivers." Seems the city is putting those out of work actors to good use, and citizen critics are taking note. Those in Houston appear less enthralled with the 82-Westheimer Bus, however: "Though the rest of the week is usually okay, I've never felt stronger public transit induced suicidal ideation than on this bus on Friday afternoons." Evidently this critic managed to tamper down on that urge long enough to Yelp, and for that commitment to service we are thankful. [Photo]

Why just critique your mode of travel? Review the road itself! There's commentary on the best and the worst highways in the country on Yelp. Falling into the former category is the scenic Pacific Coast Highway, which has merited comments like, "Just shut up, fill your tank with expensive gas, and drive." With the Kennedy Expressway in Chicago, Yelpers aren't so lucky, though: "I wish I could give the Kennedy NEGATIVE FIVE THOUSAND STARS. I cannot impart to you with words, facial expressions, violent physical rampages, or any combination thereof how deeply rooted is my hatred for this stretch of pavement." Take heart, Yelpers: it's probably just too many of you trying to critique and drive. [Photo]