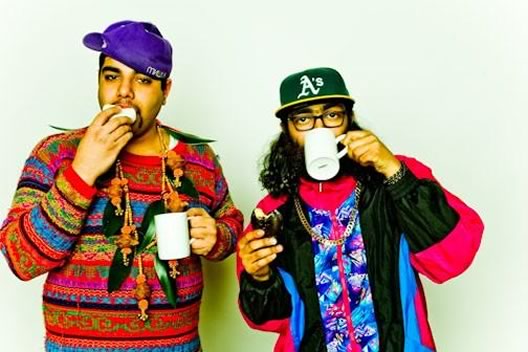 In 2009, Das Racist's song "Combination Pizza Hut & Taco Bell" rocked the internet. Suddenly the NY group was everywhere — beloved by web nerds, comedians and foodies alike. But don't call these guys food-rappers or a novelty act — their staying power lies in a smart, subversive style and killer sense of humor: one that drops cave-aged-cheese references as easily as post 9-11 socio-political commentary. One that means you'll find them rapping on Anthony Bourdain's No Reservations one minute and debating racial issues in music criticism withThe New Yorker. I caught up with DR's Himanshu Suri (aka HEEMS) to talk all things food swag.

You guys have talked a lot about your internet-fame as a result of the Combination Pizza Hut/Taco Bell song, you've been on food shows and in tons of food publications... Did it surprise you to be treated like foodies or experts all of the sudden after the Combo song?
I don't know if they treat us like experts but they definitely like talking to us about food. It wasn't as surprising as it was interesting. We talk about food on a number of songs but so does every rapper ever.

I remember at South By Southwest (SXSW) you told me you were going to just continue giving food, product or celeb-themed shout-outs just to see how much free shit you can get?.Who's next?
Sriracha hot sauce definitely.

You guys were also booked for Rachael Ray's SXSW party — what was the scene like there? I hope the food was good at least!
We skipped that one because we had like 15 shows and were pretty exhausted, but we did have someone go get us burgers from the event and they were mad good.

Can you describe your best food experience on tour?
China. We went to Uighur restaurants in both Shanghai and Beijing and it was by far some of the best food I've ever had. Everything else we ate was also great. Even the scorpions.

You all were also on Anthony Bourdain's recent holiday special. How did that come about?
We had a song called "Ek Shaneesh" on our first mixtape Shut Up, Dude in which I mention watching "Tony Bourdain" and reading his book. He heard this somehow and learned more about us and was into having us on the show so his producers reached out, and we went in and green-screened the whole thing.

You're a New Yorker born and raised — what are your favorite local spots?
My bandmates and I all like eating in Chinatown because it's cheap and the food is good. I make sure to hit up Joe's Shanghai and Shanghai Cafe for the soup dumplings. In Queens I like hitting up Dosa Hut and Jackson Diner. This tiny spot Punjabi Kabab House in Hicksville, Long Island that no one goes to and has bad reviews on the internets is one of my favorite spots to get butter chicken. I don't fuck with street meat anymore but when I was a teenager we'd drive in from Queens to get some chicken and rice or hit up 53rd and 6th after a long night out. Vermilion in Manhattan has some pretty cool Spanish/Indian food. Tamarind is probably my favorite Indian restaurant in Manhattan. Heard they just opened or are opening a Jackson Diner in Manhattan now which might be cool. Tamarind is still the most swagged out though!

When you're touring outside NYC, what cities you've visited have had the best food?
We always go to El Farolito in San Francisco. I make sure to get a piece of fried chicken from this corner bodega in Seattle whenever I'm there, which has been five times.

What's the #1 must-have on your rider?
Socks.

What's your go-to drink before or after shows?
Jameson and ginger ale.

You guys got your name from MTV show: Wonder Showzen (RIP). It was also part inspiration for IFC's psychedelic cooking show: Food Party. Do you have a fave food-themed sketch from the show? My personal fave is probably the tour of the hot dog factory?
That's definitely the best one!

And now for the lightning round of your fave haunts:

Das Racist's last two albums are available for download on here. Stay tuned for their new album dropping this year?