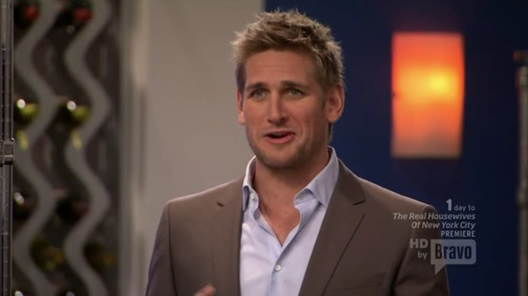 Off jump, I think Bravo needs a more famous host. At least with Kelly Choi, most people recognized, “Oh, that’s the hostess from Bonchon that’s always overdressed!” I mean, she was memorable! Curtis Stone just looks like Gordon Ramsay found the fountain of youth and Lance Bass’ hair dresser. 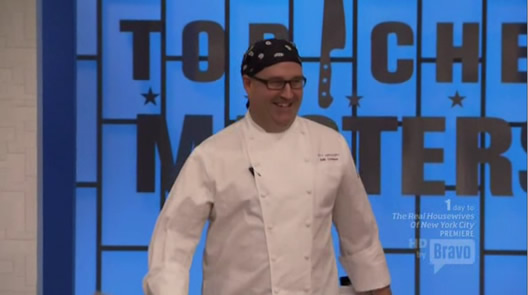 Jon Currence: “I am the Street Dream... I’m a fool in this black bandana.” 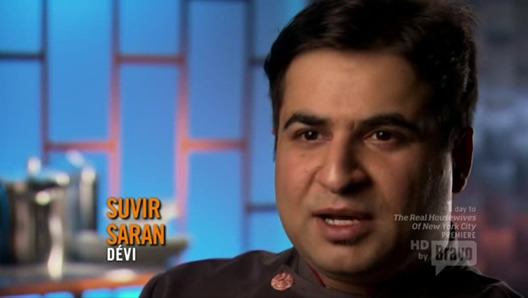 And unfortunately, I recognized Suvir as well, he of the “good looks,” dog bites, and the Kool G Rap lisp. Would someone please start a Facebook page for Suvir’s lisp and good looks? Thanks.

Then came Unibrow Atcheson. Any one who would go on national television with a unibrow needs to get a Duane Reade card and buy a beard trimmer. I’m allergic to caterpillars so I took a shower after this dude’s grill hit the screen. 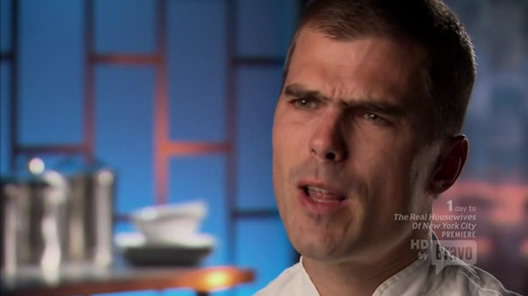 The other people were dope, but let’s fast forward to the corned beef in the quick fire. Obviously disillusioned by the popularity of The King’s Speech, Suvir informs us canned corned beef is not fit for a master on a pedestal such as himself. I understand if He-Man or Geoffrey Rush doesn’t want canned meat, but I thought Indians loved canned meat!

Shit, wrong Indians. Must re-watch Goodwill Hunting. I always get it twisted.

Meanwhile, the other chefs try to size each other up like girls in a locker room. Mary Sue thinks Currence has an advantage with frog legs being from the South. Stratta jizzes his pants over the judges: Oseland and Reichl. What’s he so worked up about? Are these judges even elite yelpers? Psshhhh. 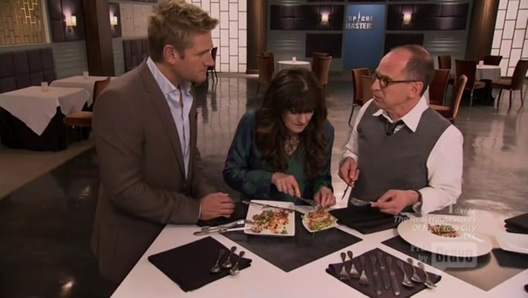 Floyd and Stratta get vegetable extract and the only thing Stratta can think of is marmite. I would have just made Pimm’s Cup — a marmite-based Pimm’s Cup. After all the hoopla, Mary Sue fries cottage cheese and beats Currence’s Hooters-inspired buffalo frog legs. But when praising Mary Sue’s dish, Reichl says, “I give him real credit for this cottage cheese.” Either Mary Sue went to the tuck shop or Reichl never made it to the Seneca Convention. Feminism set back 25 years.

Annnnddd Kool G Suvir is back “Ve had Vuh Vorst.” translation: “I had to make chaat with corned beef and chaat.” Before Suvir could say water, we get a shot of Celina Tio’s empty plate. I told you Asians liked canned meat, she just couldn’t help herself. Naomi then followed up with a minimalist dish of her own titled: Portlandia Emperor’s New Clothes.

Suddenly, when Oseland says, “I can’t get enough marmite.” I realize who he reminds me of... MR. GARRISON

Marmite is mmMMKay. Mr. Garrison also likes Traci’s salads over John S.’s peanut butter-licorice reese’s pieces (which I have since forwarded to the editor of the Cannabis Cookbook) and proclaims, “I would eat this if I was wasted.” No, you wouldn’t Oseland, because if you were wasted, you’d probably want some sort of macrobiotic marmite dessert that none of us relate to. I love when they cast professorial judges who haven’t been outside the “tower” since that ‘caine found soda and water.

Naomi then starts to whine about how she would have won if she finished her dish. You also would have been the Prom Queen if you didn’t look like Dr. Melfi but you do. And the winner of the quickfire challenge... TRACI!

SALAD WINS? SALAD? What is going on? Have none of you read Fuschia Dunlop’s account of salad in Shark’s Fin and Sichuan Pepper: A Sweet-Sour Memoir of NOT EATING SALAD in CHINESE JAILS?

On to Restaurant Wars where Naomi says every one in Portland eats at the same time, there’s a communal spirit, a seance, they drink purple kool aid, and die. I really thought Oregon was cool when I got my first Jerome Baker but apparently it’s not that dope anymore. Either way, Naomi straps on her dillz and takes the lead for Team Red, everyone ducks for cover. Bitch on the loose.

On the other side, Hugh starts telling jokes: “2 Indians, 2 Americans, a Canadian, and a Portuguese guy walk in a bar...” Then they name the bar Mosaic. I would rather tell unibrow jokes and call the bar There are No Black People on Bravo. While this is going on, Team Red is trying to figure out how they’re going to seat and serve every one at the same time. I have no idea why the chick who couldn’t even finish her dish in the first round is Team Leader, but I think the idea was to keep her out of the kitchen even if it meant they had to blow their load at once.

Mendes decides he’s been quiet too long, finds the Lindsay Lohan in the safe, and proceeds to bug on Traci “TAKE CONTROL”. Traci doesn’t know what to do so she just starts making salad. Hugh and the others go shopping and I found myself wishing they were at Mood Fabrics w/ Tim Gunn trying to give Suvir a new look: “Make it work!” Oseland needs a quotable like “Make it work” or “mmKay”... we’ll think of some for next week.

Prep gets heated and Currence is worried that Stratta’s knife work is too detailed. “Where is that Chinaman w/ the cleaver when i need him!” Sorry Jon, I’m hammered and can’t operate a cleaver at this time. (Insert photo of me wasted.) It looks like a shit show at Leela (team red) and the judges start at Mosaic. They take jabs at Naomi’s style of service and Traci arrives just in time with more salad. But Reichl can’t get enough. “Tracy’s salad epitomizes what’s great about California American cooking, put it on the plate and not fuss over it.” No, Ruth, that’s not what’s really good, that’s SHOPPING. While you’re at it, give Peg Bundy a Beard Award for the way she bought Al orange juice.

Back in the kitchen, Mendes is still skeeted and yells at a waiter. But, like Lil’ Wayne, Mendes does his best work slizzered and goes HAM w/ the salmon over smoked potatoes. Oseland is so confused, “how do the potatoes have this smoked flavor?” I dunno Oseland, maybe they SMOKED them. Then comes Mary’Sue’s supermarket cupcake that Oseland hates, but across the dining room, the man w/ the ill fitting jacket and silver bangle loves it which once again confirms my theory that not all people should be allowed to vote or procreate.

All in all, the judges hate Leela. They think Sue’s halibut is pretty but it is reminiscent of that time Gael Green took Ruth Reichl back to the Holiday Inn. HOT!

After Reichl delivers the best zinger on Bravo since Michael Kors called someone a disco pumpkin, they get raw lamb that’s still poppin’ tags. Literally, the tags are still on the lamb. Somehow, the best dish of the tasting seems to be Naomi’s chocolate torte. I’m convinced she bought it. We go to commercial and suddenly, SPOILER, the teaser for next week shows Naomi and Mary Sue! They’re not getting cut? There’s also a clip of Suvir revealing that Chefs don’t actually work and that this was the first time he got caught wide open and dripping. Welcome to the real world, Chief, close your legs.

In the end, the customers liked Leela better and it’s like Bush v. Gore all over again. How did this happen? We can’t even blame chads. The two chefs on the chopping block are Hugh and Mary Sue. Hugh is pretty unlikeable. He purses his lips, minces words, blames Maldon salt and channels Lumbergh from Office Space. No Hugh, we don’t have your fucking TPS reports but it doesn’t help to keep pouring salt every where like it just snowed in the office. Back in the green room, Floyd says, “As we say in India, time for another scotch.” I can’t wait when every one is 3rd generation in 10 years and we don’t have to tell jaded jokes like “As we say on Canal St., you pay now.” Hugh, you’re fired. 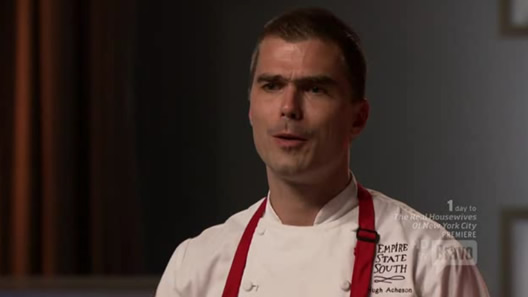