Across the country, new breeds of restaurant chains are popping up to fulfill Americans' endless appetite for the hamburger. Here now, part four in a five-part series profiling the "better burger" chains. Yesterday was upstart chains expanding to the Middle East, today: promising small-scale upstarts. 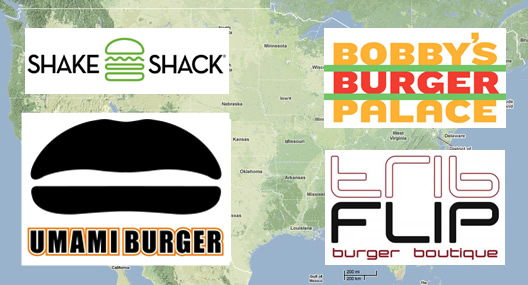 Celebrity chefs have become the latest burger barons. While haute burgers are gracing menus across the country, several of the nation's most prominent chefs are also tossing their hats into the burger chain ring. 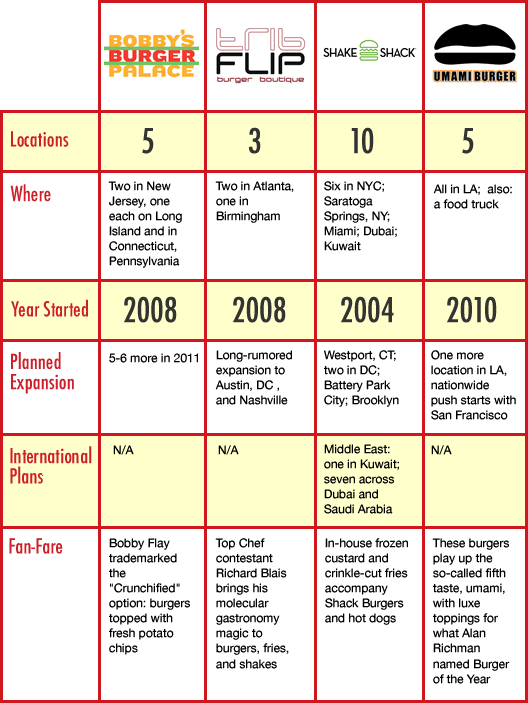 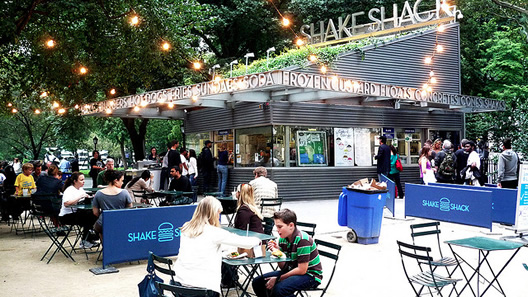 We have Shake Shack to thank, largely, for introducing the standards of fine dining to the burger format. Customers are enamored of the custom Pat LaFrieda meat blend and homemade frozen custards, as evidenced by often seemingly endless lines at the original Madison Square Park location. Their expansion has been a bit slow as Union Square Hospitality Group's Danny Meyer and his team painstakingly refine the minute details that make each location feel as close to the same as possible and ensure quality for consumers. Randy Garutti, COO of Shake Shack, explained to us that "our goal as a company is to only expand as much and as quickly as we can make sure that each location is even better than the last."

That rate of expansion has increased this year, as the ten-unit chain adds another five locations — more than in any other individual year. Garutti expects a similar pace in the future, so long as Shake Shack can continue to grow into prime locations. "You'll never find us in some strip mall space," he said. "That just isn't us. But as long as we can find great spaces that fit, we hope to keep growing and bringing the same quality to more locations." Future spots include Westport, CT, two in Washington, DC (Nationals Park and Dupont Circle), Brooklyn, Battery Park in New York City, and the Middle East. According to Garutti, the first DC location should be open by the end of May, but the company isn't done with the area. Shake Shack is looking into increasing their presence in Miami, the DC area, and potentially farther north along the East Coast. Sorry, West Coast Shakeshack-ers, but the company is primarily focused on bringing the magic to just one side of the country.

Burger expert Josh Ozersky cites Shake Shack's impact on quality standards as its greatest feat, whether they directly reach every market or not. That being said, he doesn't expect them to stay in the margins as a small chain for long. "Shake Shack is the most accomplished and successful in my lifetime," told us. "They have peerless quality control and now that they have it down, they're rolling out more." Ozersky also claims that Shake Shack has ushered in "a second Golden Age of hamburgers." 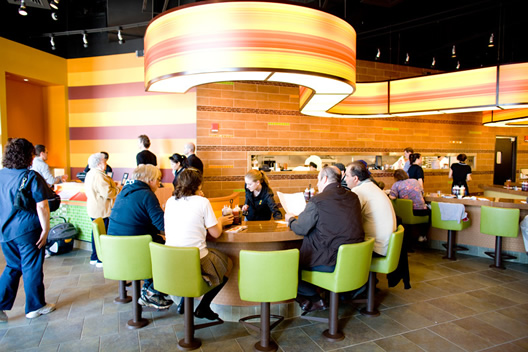 In Bobby Flay's latest venture, the Iron Chef and all around man about television has opened five branches of Bobby's Burger Palace since 2008. While he won the title of Burger Bash champ at last year's New York Wine and Food Festival, Bobby's Burger Palace has been taking gourmet composed burgers on the road to suburban locations in New York, New Jersey, and Connecticut.

Flay bills each burger as a plateable "tribute to America's regional flavors," inspired by his travels across the country on the Food Network show Food Nation. Which means combinations such as the Santa Fe burger with queso and pickled jalapenos or the spice-crusted Dallas burger with Monterey Jack and BBQ sauce. Using a base of Kansas-raised certified Angus beef ground by the experts at Burger Maker, Flay focuses on his desire to "just cook the food." The chef explained, "I didn’t want my burgers to be fancied-up chef-style burgers. That’s not my interest at all. If I want foie gras, I’m going to create a dish for foie gras and present it nicely on a plate and serve it for $38. My burgers are burgers and we flavor them from different places around the country and they’re sort of obvious. It’s things that you could almost predict but with a little bit of a twist." The toppings are limited to two to three per creation to ensure that the experience is ultimately about the six oz. burger patty itself.

Flay has also trademarked the terms "Crunchify" and "Crunchburger," i.e., putting potato chips on this sandwich subspecies. While the burger business is booming these days, the chef isn't too worried about keeping up with the competition—as he explained at a food industry event, "I feel we have an advantage. When I open a restaurant, people come... That doesn’t mean they’ll like it... It doesn’t guarantee anything, but it gives us a shot."

Flay's burgers are currently only available in the New York tri-state area. While there were reported plans to open 12 new locations in 2011, Bobby told us that he hopes to expand the chain by five to six new locations in the next 10 to 12 months, building up to a total of 11 or 12 by the end of the year. The fledgling chain has already secured a location in downtown DC, and he reports plans for DC suburb Bethesda, Maryland. Flay also plans on a few South Jersey stores in Cherry Hill and Princeton, and possibly another on Long Island. "People talk about it as a trend in burgers," Flay said. "I don't think of it that way at all. In my lifetime, burgers have always been popular and they work in every economy. It's just one of those things that are part of the American landscape. I think we'll sell burgers in a bad economy and I think we'll sell even more burgers in a good economy." Bobby's Burger Palace is only getting bigger, so stay tuned if you're eager to get Crunchified. 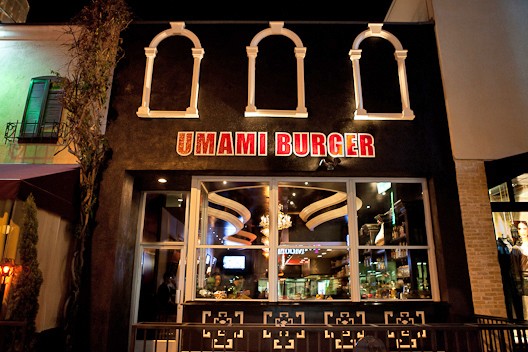 Umami Burger has grabbed onto one of biggest flavor buzzwords of the last few years, designing each burger to play up the Japanese "fifth taste". Los Angeles-based restauranteur and rising star Adam Fleischman (of Culver City's BottleRock and Vinoteque) has ventured away from the wine scene and into the burger game with a quickly-multiplying not-so-fast and not-so-casual new restaurant concept. The results are upscale, savory burgers in differentiated spaces that provide a unique dining experience for visitors. (Los Feliz, Santa Monica, Valli)

When asked about meat sourcing, Umami refuses to spill any trade secrets, but representatives asserted that "we are using better quality meat than anyone else in the burger business." The pre-umami'd meat is brought in from multiple sources including Niman Ranch and purveyors both Seattle and California, then ground on the premises throughout the day, approximately every half an hour. Pairing their freshly ground custom blend with cheese processed in-house and homemade pickles helps Umami ensure that all added value comes from the work within every location. This distinction helps keep prices down—and quality way, way up.

So far, they're off to a great start. Not only did GQ name the budding chain Burger of the Year last year, but they have expanded to five locations and more are in the works with the goal of going national, starting with venturing beyond LA through locations in in San Francisco and Oakland. Ten are expected to open every year over the next five years. According to the company, after conquering Northern California, they are considering expanding south of LA into Orange County, heading to Las Vegas, and potentially even venturing to Texas. For now at least, they're definitely taking LA by storm with cheeseburger chic. 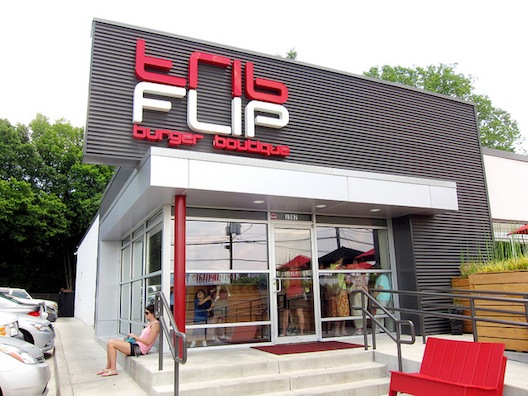 Last but certainly not least, we have Flip Burger from the ever-inventive Richard Blais. Some of these burgers just have to be seen to be believed. Foie gras liquid nitrogen milkshake? Tuna tartare burger? Condiments like red wine jam and coca cola ketchup? With rotating menu options and new flavors and seasonal offerings added regularly, we dare you to find a dull Blais burger.

The Top Chef All Stars champ launched Flip Burger in 2008 with the idea of bringing his trademark mad scientist chef skills to "fine dining between two buns" with revamped and revved up casual classics. According to Blais, he only limited his innovation process with two rules for the new creations: "whatever we call a burger has to be ground and it has to be on a bun."

For the half of the menu that includes more traditional, beef-based burgers, Flip grinds its own signature beef blend from short ribs, hanger steak, and brisket. From there, Blais and his creative team take inspiration from classic dishes like ossobucco or fried chicken and find ways to develop the most powerful variations of traditional flavors.

There are currently only three locations—all based around Blais' home base in Atlanta, but we have high hopes that this high-concept, low-budget chain will both spread (as currently only rumored) and—perhaps more importantly—inspire other chefs to carve out a niche in making culinary feats into approachable eats.