The Story of the Hamburger, Part Two: The Present

Share All sharing options for: The Story of the Hamburger, Part Two: The Present

Here now, we welcome video producer, writer, and hamburgerologist Josh Ozersky to the dancefloor. Having written a book on hamburgers — The Hamburger: A History (Amazon) — and likely eaten more hamburgers in his lifetime than you ever will, he could very well be called an expert in the subject. In his three-part series, Mr. Ozersky will explore the past, present, and future of the hamburger. Today, part two: the present. 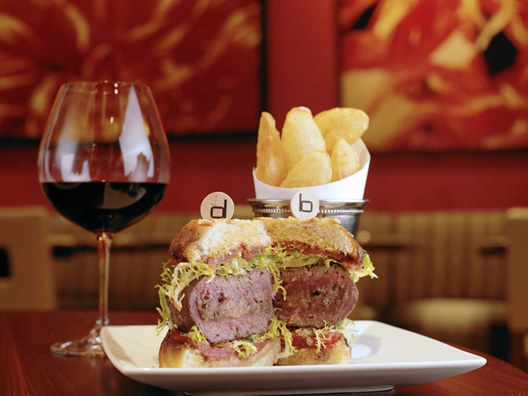 The modern era of Hamburger History began in 2001, when Daniel Boulud introduced the db Burger, largely as a PR stunt to attract notice to his new Times Square bistro, DB Bistro Moderne. The burger, if it could be called that, belonged to the "upscale burlesque" genre — it was so round that it literally could not stand on its own when split, and would fall back helplessly on its back, exposing its preposterous short-rib and foie-gras stuffing. (Later, truffles would be added on top, jacking the price to well over $100.)

The period was ripe for this sort of overwrought, baroque creation: though the country was in what would be the first of many recessions, fine dining in New York was booming thanks to an explosion of "foodie" culture, as gastronomes were now called. West-side feinschmeckers and East-side douchebags vied to see who could eat the most elaborate hamburger, and boast about it most earnestly.

Meanwhile, New York City's most celebrated traditional hamburgers fell into a state of indolence and stultification. Praised year after year by various free papers as the city's best burger, the Corner Bistro started pre-cooking the burgers, often leaving them in a pool of gray goo for hours before reheating them and serving them atop an untoasted bun with a curl of deep-fried bacon on top.

The obese bar behemoths at various Irish taverns such as Donovan's, Molly's, and the Tavern on Jane continued to sate beery bellies. And this sad state replicated itself in cities across the country. Then something changed. And that something was The Shake Shack. 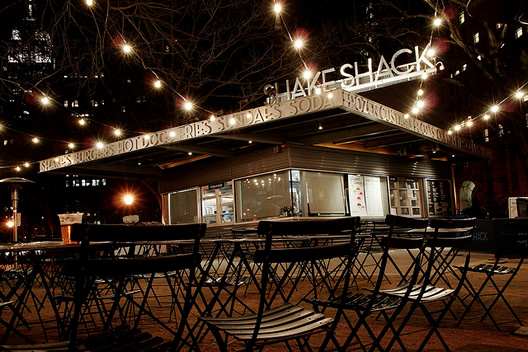 The Shake Shack began a second Golden Age of hamburgers. The credit belongs to Danny Meyer, along with his team-members David Swinghamer and Randy Garruti. These men agreed that the burger deserved all the respect and care due to American fine dining, but not as a joke, nor as the subject for Dr. Moreau-style culinary experiments. They looked at the best hamburgers in the American tradition, particularly those made by the faultlessly pure-minded Midwestern chain Steak 'n Shake, and applied the standards of their best restaurants to them. The tomato on the Shack Burger is the same tomato that you get in a salad at Union Square Cafe; the custard was created by Nicole Katz, the pastry chef at Eleven Madison Park. And the beef was entrusted to the most skilled and conscientious butcher in New York, Pat LaFrieda.

A note here: I'm friends with Pat LaFrieda. Various Eater trolls, writing from inside SRO hotels, prisons, and pysch wards, have jeered at my support of the LaFriedas over the years. And it's true, I love the guy and consider him a true master. But it was his creation of a specialty blend for the Shake Shack that opened the door for all the great hamburgers in New York: The Shack, the Spotted Pig, the little owl, and so many more.

The Shake Shack/LaFrieda collaboration introduced the idea that hamburger was not just a vague and generic element, a box of stuff that could be formed into patties, or worse yet a frozen disc that you got delivered along with the napkins. It was the central element of the burger, a piece of fresh meat as variable and vital to a good meal as a steak on a plate. Pat's father, Pat Senior, had been mixing different blends for his customers for years; hamburger was a specialty of his shop, and one that set it apart from its other excellent rivals, such as Piccinini, Master Purveyors, and DeBragga and Spitler. LaFrieda sold good steaks, and declared itself "the first name in lamb and veal," but it had always boasted the city's top hamburger program. The meat was made from whole muscles, ground twice, and Pat himself oversaw its creation overnight. It wasn't cheap, but it was the best, and the Shack used all the methods — salting, griddling, cooking to order — to create a paradigm shift in the hamburger business.

Inevitably, crass emulation followed. The bistros which were now in the forefront of every city's dining scene moved to create a special gourmet burger. Missing the point of the Shake Shack entirely, they tended to over-elaborate the burgers with gross toppings, including odd cheeses, tough "artisanal" buns (or, alternately, effeminate brioche) and meat that often had odd cuts built into it — including non-beef ones. Even the Quick Service Restaurants, or QSRs, got into the act, and started selling "gourmet" burgers that tasted even worse than their standard product.

All of this innovation coincided with an increased awareness, triggered by Eric Schlosser's Fast Food Nation, that the burgers Americans were eating were making them fat and sick. E. coli and "Mad Cow" epidemics further tainted the name of the mighty hamburger, and it seems that at the moment, its honor has taken refuge in a small corner of the American dining scene: those high-end urban restaurants that feature the hamburger as a signature dish.

Not that hamburgers are selling less well. In fact, more of them sell now than ever more. The hamburger is, in fact, omnipotent and irresistible, a force of nature that neither fashion, nor force, nor the power of local pride can resist. They are eaten in greater numbers every year from China to Peru, and the temporary victory of Subway over McDonald's as the world's biggest restaurant chain pales when one adds in all the other huge hamburger companies.

In America, certainly, the hamburger will continue to reign supreme. It dominates the stomachs of the populace, the menus of the bars and restaurants, and the very air around us, amplified by the broadcast signals sent from burger blogs, burger demos, cookbooks, and contests and every medium known to man. The most powerful lifestyle doyenne with a billion dollar empire, and the penniless blogger with a camera and an urge to eat, alike celebrate this central, sacred creation.

But what will the burger be like in the years to come? That's a question I still have to answer.