Welcome to Burger Week's Veggie Burger Power Hour! For the next full hour, Eater National — along with every Eater city blog — will become veggie burger central, and that means all the bean burgers, nut burgers, grain burgers and artificial meat patties you can handle (and probably more). Below, we're liveblogging the veggie action on the all the city Eaters, and throwing in lots of surprises of our own. Hold onto your vegan hats, fatties!

2:00
Here are the ingredients for a 10 Oz "Cheeseburger" from Boca Burger:

2:04
So spoiler alert you guys, our man Suvir was booted from Top Chef Masters. Why? Because he MADE A VEGGIE BURGER. The vegetarian chef argued that he was "hoping to make a statement that it's very easy to be fooled into eating red meat and thinking you're eating good calories." Yep, he was sent packing. Here's the video.

What up Chicago vegetarians? Eater Chicago brings word that Kuma's Corner actually serves veggie burgers, and to make the sadness that is vegetarianism a little spicier, the restaurant gives the veggie burgers hardcore names, like the Iron Maiden, which is just avocado, cherry peppers, pepper jack, chipotle mayo. That doesn't sound very hardcore at all. [-ECHI-]

2:14
Apparently according to a vegan — can you really trust a vegan? — the best veggie burger in DC is the Science Club's housemade black bean burger. Now you know. [-EDC-]

2:20
Vegetarians like to name food after real, meat-based foods. Thus, witness the Chorizo Sliders at Karyn's on Green in Chicago. It's made with "well-seasoned soy protein." [-ECHI-]

2:25
Here is a picture of a vegan imitation Double Down: 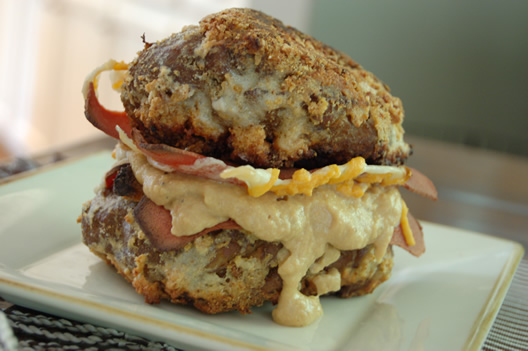 2:27
Eater NY brings the Veggie Burger Power Hour thunder (henceforth VBPH) with a monster mashup of the Veggie Burger at Westville East is topped with a Shroom Burger from Shake Shack, creating the Villshroom. [-ENY-]

Eater Seattle brings word of a square veggie burger at Uneeda Burger made of organic Bluebird farms emmer, a grain also known as farro, that's then:

stirred into a boiling veggie stock, then whole cooked emmer, chopped portabellas, a traditional mirepoix and seasonings like fresh thyme and rosemary go in as well. This cooks down for roughly 40 minutes, then gets poured onto sheet trays to cool and cut into squares.

Okay, this is better than the Boca Burger: The All American Stack Burger from The Veggie Grill in Los Angeles:

2:35
The lady in this ad for McDonald's India gets rather upset when she catches a guy checking her out. At least they both have Aloo Tikki veggie burgers?

2:39
UHOH. Here's comes San Francisco — the largest per capita of vegetarians in the world, well except maybe India — bringing its veggie burger A-game. They're starting out with a friggin POLL to figure out which the best veggie burger is. Ruthless. [-ESF-]

2:43
FOOD STYLING ALERT: Nothing prettifies a disc of brown vegetable matter like some sliced avocado. From the DC restaurant Busboys & Poets. Yes, that's what it's called. They also serve tempeh paninis. 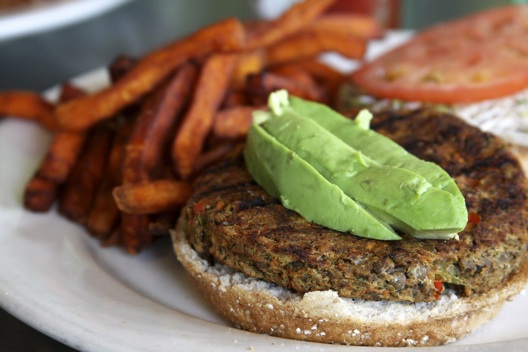 2:45
From Eater NY comes this video from Scandinavian graphic design firm Kinderbrød: an audio-visual celebration of the meat-less sandwich, set to the tune of the classic Beach Boys pro-greenmarket psychedelic anthem, Vegetables

2:47
The Food Network must really hate vegetarians, because here's a photo of what they think a veggie burger should look like. Hide your kids. 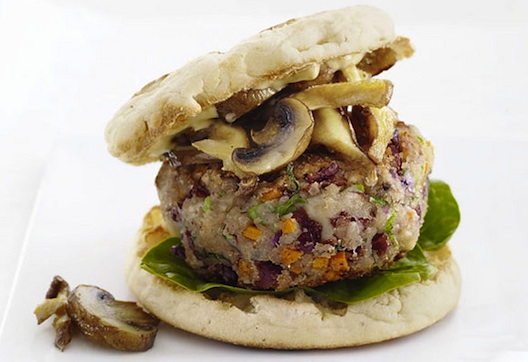 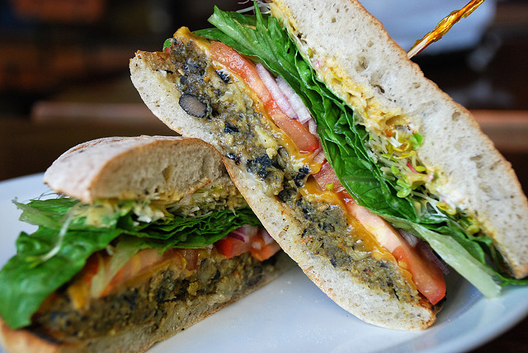 Eater Seattle profiles the "blended, smooshed, processed" veggie burger at Cherry Street Coffee House, and determines the term "burger" is a bit of a stretch. We concur. There is so much sadness on this page. [-ESEA-]

2:54
Of course Eater DC turned to a DC-headquartered animal advocacy non-profit group called Compassion Over Killing for their picks on the best veggie burgers in town. [-EDC-]

JK: First of all, I would never eat a vegetarian burger. In fact, they shouldn't even be called burgers.

RR: I agree with you on that. I've had mighty tasty veggie patties, but they are not burgers. Burgers should involve meat.

You go Rachael Ray. She gets it.

Here's what passes for a veggie burger from Amtrak's Coast Starlight Dining Car: 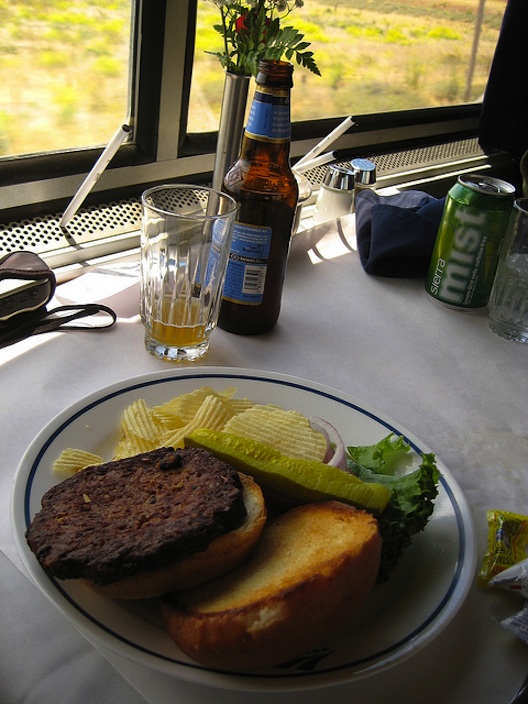 3:00
This is from DMK Burger Bar in Chicago. People actually put this in their mouths and eat it: 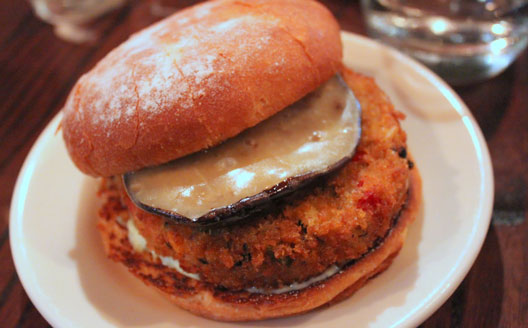 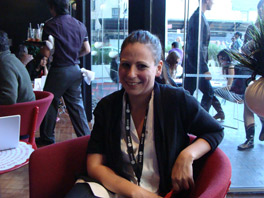 Still going! Eater NY brings the funk with Dirty Candy chef Amanda Cohen. She's vegetarian, so it makes sense. Thing is, she fucking hates veggie burgers, saying, "They were bland, unpleasant, squishy and, worst of all, the condiments were boring and you had to beg even to get mayonnaise. And so I quit." 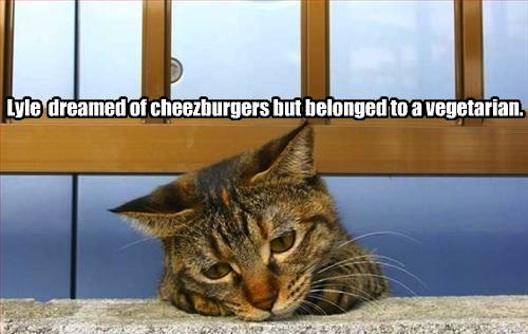