The Story of the Hamburger, Part One: The Past

Share All sharing options for: The Story of the Hamburger, Part One: The Past

Here now, we welcome video producer, writer, and hamburgerologist Josh Ozersky to the dancefloor. Having written a book on hamburgers — The Hamburger: A History (Amazon) — and likely eaten more hamburgers in his lifetime than you ever will, he could very well be called an expert in the subject. In his three-part series, Mr. Ozersky will explore the past, present, and future of the hamburger. Today, part one: the past. 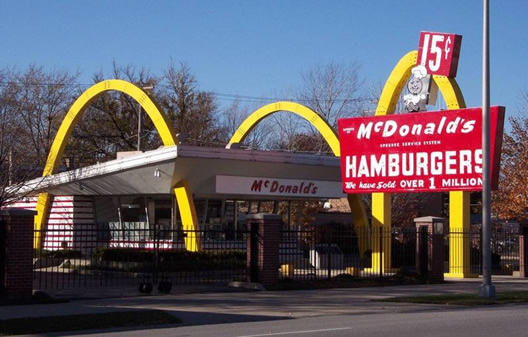 The Hamburger, the national food of America, was created in Wichita, Kansas in 1921. It was made to be sold. Like the nation it would later stand for to the outside world, it was born in business: its sole purpose was to make money, and that is why its creation can be dated so exactly.

After all, no historian can presume to date the first bowl of spaghetti; there is no public controversy that surrounds the discovery of salting, or a plaque for the first man to eat over the sink. Those things happened in secret, so often and so invisibly that they may as well not have happened at all. Likewise, a lot of people thought to grind up scraps of meat and eat them between two pieces of bread. We do it all the time: sausage sandwiches, meatball subs, Manwiches. Those aren't hamburgers.

The hamburger is a poetic public object, the result of care and industry and enterprise. It came into being as a commodity, and has existed at all times in the public sphere. A hamburger made at home is meaningless, an open letter written in lemon juice. But out in public, where it belongs, living in wrappers and radiating in neon, it's part of our collective lives, a central symbol of food in the American imagination. Composed of bun and beef, and served with a special name, it has a place here that it doesn't have anywhere else. As we change, so does it: and so to follow hamburgers is to follow history.

My friends at Eater have asked me to write a little something about the past, present, and future of the hamburger. The past, the subject of this essay, is the most important part. The hamburger is the most Confucian of sandwiches, drawing its whole identity from its ancestors, in much the same way a seasoned old grill gets its character from all the beef cooked on it over the years. But nobody (but me) wants to eat only the outmoded and obsolete burgers of yesterday. Mighty engines of innovation are always at work trying to build a better burger, and I mean to talk about that very topic tomorrow; but generally these efforts have been in vain. 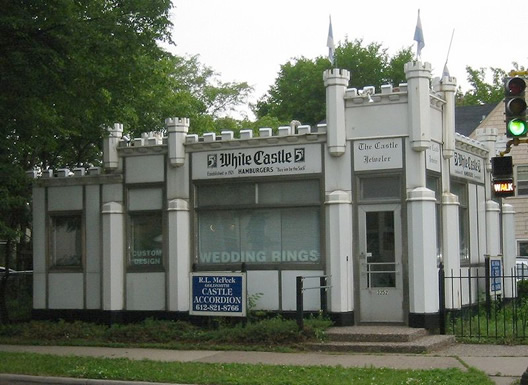 The earliest hamburgers, as served at White Castle (for that was the Wichita restaurant that birthed the burger), were small, frequently little more than an ounce of beef, and set in a tiny roll. You may have read about something called “hamburg steak” served at Gilded Age restaurants, but those aren't hamburgers; they're more akin to what we call Salisbury steak, when we think of it at all. The first hamburgers were sliders, the culinary equivalent of the tiny, agile mammals that are our own earliest ancestors. They were generally cooked on flat metal grills, were very cheap, and were eaten in quantity. (White Castle's motto was “buy them by the sack.”) They had neither cheese, tomato, nor lettuce on top of them; some soft grilled onions and a squirt of ketchup were generally one's only options. For some reason unknown to history, southern burger chains put a squirt of mustard on, rather than ketchup, as in the north, and this tradition has continued on to the present day. 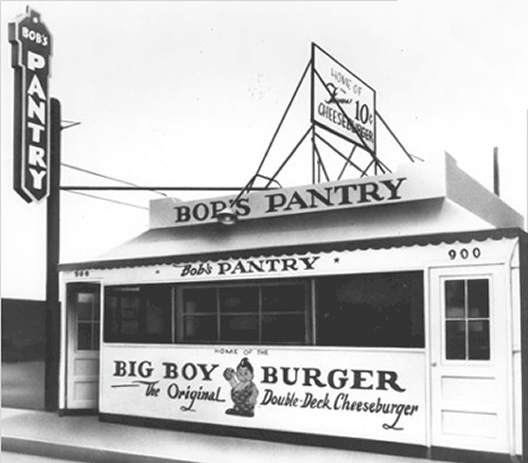 Cheese was laid on for the first time sometime in the mid-1920s. The credit for the innovation is generally given to Lionel Clark Sternberger, a Pasadena diner operator. Historically speaking, the claim is plausible enough, but no one can be sure. It's surely in Sternberger's favor that no rival claim has, to my knowledge, been advanced in all these years. If Sternberger is in fact the inventor of the cheeseburger, then American cheese was present at its creation – which is as it should be. Bob Wian, a Glendale diner operator, invented the double-decker hamburger, which he later franchised as "Bob's Big Boy." At one time, the portly, pompadoured lad who stood in front of the restaurants was one of America's most recognizable icons; today, he's barely remember at all. 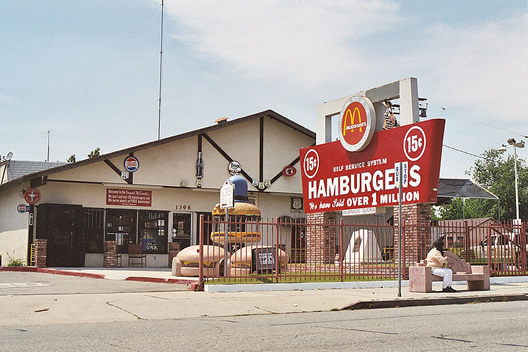 The fact that both Sternberg and Wian were drive-in operators in Southern California as no coincidence; the region was from a very early time the capital of hamburger innovation. When Richard and Maurice McDonald decided to modernize their San Bernardino restaurant in 1948, they were just doing what they had to do to keep up. That said, the two men were visionaries, and single-handedly created the fast-food hamburger as we know it today: made one way, wrapped in paper, and kept warm for a waiting customer whom you get rid of as soon as you can. Later, Ray Kroc, the McDonald brothers' milkshake machine vendor, franchised the concept and created McDonald's as we know it today, writing the brothers out of the story along the way. They remain dim and mythic figures, the Romulus and Remus of fast-food history.

By the late 50s, the hamburger had settled into three recognizable phyla. There was the modern fast food burger, as served at McDonald's, Burger King, Burger Chef, et al., a gray flat plan of drab processed meat enlivened only by whatever condiments atop it. Generally these burgers were two ounces or less, but after the success of the Whopper, they generally got bigger throughout the sixties and seventies. There were the small sliders still sold at urban coffee shops, at White Castle, and at the many, many White Castle mutant variants still in operation, including White Tower, Royal Castle, White Rose, White Diamond, Blue Castle, Krystal, Kewpie, and the like. And then there were the true glories of American vernacular cuisine, the idiosyncratic regional and one-off burgers served in thousands of small-time restaurants and drive-ins across the country.

Not many of these have survived, but many of those that have are described in George Motz's invaluable Hamburger America. Most are small and simple, but draw on the local terroir: the butter burger at Solly's in Wisconsin, for example, or the green chile cheeseburger at New Mexico's Bobcat Bite, and others, all unique and immortal and doomed. A few high-end restaurants, like the 21 Club, served hamburgers as a kind of in-joke for their urbane clientele; but the dish remained primarily proletarian for most of its history.

That didn't begin to change until the 1990s. If, to borrow comic book terms, the White Castle era was the Golden Age, and mid-century a glorious but deeply flawed Silver Age, the Modern Age began in 2001. Since we are still living inside it, it belongs in a discussion of the burger's present, not its past. And that comes tomorrow.