The Dodos Prescribe Octopus For Whatever Ails You

Share All sharing options for: The Dodos Prescribe Octopus For Whatever Ails You 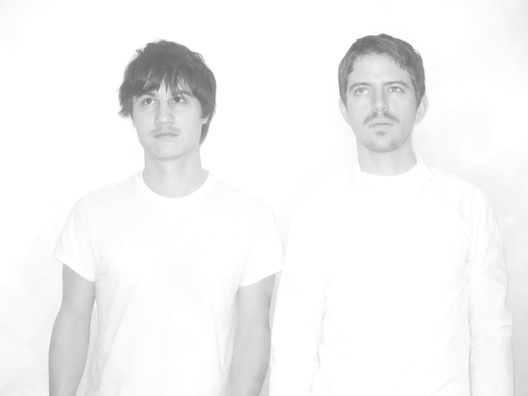 The San Francisco duo The Dodos first introduced their enigmatic brand of folk back in 2005. The combination of Logan Kroeber's unique drum style and guitarist/vocalist Meric Long's unembellished, warm melodies caught the attention of Frenchkiss Records, who put out their sophomore record "Visiter" in 2008. Their popular single "Fools" was even featured in a Miller Chill ad. They are about to set out on another European and North American tour in support of their latest record, "No Color." I caught up with Meric to discuss his love-hate relationship with food blogs and the seventh food group: Sriracha.

I hear you used to be a line cook for years in San Francisco?
Yeah, I mainly worked for about 6 years in a restaurant called Zuni in San Francisco. Which is a pretty well-known established restaurant. The idea is we have a lot of local, sustainable farms that we get all the produce from and meat from. It's Mediterranean food. But yeah, I mean I got into that just by default, I love to cook and just sort of working in restaurants. I didn't go to culinary school or anything like that. Zuni was the main restaurant I worked at, it was a pretty intense job. I really loved it but I was definitely pretty stoked when I could do music full time.

What kind of stuff do you usually cook at home?
Well I'm half Chinese, my mom is Chinese and growing up my mom cooked a lot of old dishes from where she grew up which is Tahiti. She kind of has a pretty mixed background when it comes to food, like Chinese food and traditional Tahitian food, which is pretty strange. Tahiti is also a French colony. My mom was a really big influence on me in terms of food and she exposed me to a lot of stuff when I was kid.

And I worked in that restaurant for so long that I know how to make all the recipes there of course. I guess I was taught?.not like a French style I guess but more like a Mediterranean style, basically it's like Italian cooking because I use a lot of oil and don't use butter a lot. Last night I was watching this show "America's Next Great Restaurant." And I was watching the episode pretty late last night with my girlfriend and it was like 2 a.m. and I was getting angry 'cause the people on there didn't know what they're doing and had this amazing opportunity to make a new restaurant. So I got super inspired to make a late night snack. I basically just made a taco but I put everything I had in the refrigerator in there.

But when I worked at Zuni, one of the biggest things they make is this Caesar salad. There's two things, the biggest sellers there: Caesar salad and roast chicken. But what I learned was this Caesar salad approach to everything. We would make the dressing to-order for each salad. And Caesar dressing is lemon, anchovies, raw egg, Parmesan cheese, garlic and all this things on their own are pretty strong flavors. So it's like the more lemon you add, the more anchovies you add, the more egg you add the more lemon you add?. learned that you can increase the flavor as long as everything is balanced and so when I cook I like to push that ethos, make something ridiculously salty and find something else to balance it out.

So are you all about mixing and matching or do you have one ingredient or condiment you can't live with out?
I would say Sriracha. Sriracha sauce is versatile and it makes everything taste good and it's such a well-balanced sauce. You know, like Tabasco is really vinegary and Tapatio is pretty good but it feels like you can never put enough on your food. Sriracha is just the perfect sauce.

You were recently on a food & music panel at South By Southwest, tell me a little more about that?
Yeah, it was pretty funny. It was a really open-ended, my topic, nobody really knew what are we talking about. I guess it was in attempt to bridge food and music. I guess we just rambled about a bunch of stuff. I was really hungover then, and barely there. We had a really rough week in Austin and played a lot of shows, I was just trying to get through it. I mean there were some really funny moments that's for sure. But we were competing with Yoko Ono who was playing across the street so there weren't many people in the audience.

It's like Yoko Ono hates food ! Just kidding. But yeah, that is definitely stiff competition?.
Haha, yeah. I'm not very articulate but I worked as a cook and of course as a musician so it gives me a unique perspective because people either work in one or the other. Specifically working in the kitchen of a restaurant is really weird. People have a lot of pride about being a cook, it's like being in some weird club. The people who do it, can just look at each other and nod. It definitely helped prepare me to be a musician in a lot of ways.

How so?
It's just that when you work as a line cook you have to just roll with it. It's really good training for when something goes wrong and you get slammed with direct orders and you don't have enough of this or that and you have to improvise and make something up. You can't get pissed about it. Same thing happens on tour. Shit goes wrong and equipment blows up and sound guys get mad at you and they fuck up your sound and you just have to go with it. It's exhausting, you know, you just have all these things that make you uncomfortable all the time and you have to be able to roll with it.

Do you read any food blogs or use any apps like FoodSpotting?
No, I'm totally detached from that stuff. I know about some food blogs in San Francisco — I read some to see what people were saying about my friend's restaurant. But that's it. Yeah, I mean, I love food, I love cooking — it comes second only to music — but I kinda hate when people talk about food too much. I'm sorry, I know I'm talking at a food blog but I guess it doesn't bug me when people just talk about food. But the type of people that get bread out of that talk sometimes just say the same thing over and over. I don't know, it's easy to get carried away.

Yeah, in both music and food writing, I feel there's always been the critics vs. creators debate?.
Yeah, like food is food and I always found most food blogs annoying. But for the longest time in music I read stuff and I never realized it was the same thing. Now I can't read music blogs, I just it bugs the shit out of me. I don't know, maybe it started when we got a bad review or something, haha...

So are there any hometown San Francisco restaurants you miss when touring?
I mean the first thing I usually eat when I get back here is a Mission Burrito or a taco from a taco truck somewhere in the Mission. The Mission district is really great for Mexican food and the food there is amazing. I kind of lost perspective on what is, how to compare. There's also a restaurant called Mission Chinese Food here that I really like. Basically these two dudes took over this old Chinese restaurant and they started making what looks like elevated Chinese food but it's really not. It's still really cheap, like 7 bucks for a dish. It's basically really good Chinese food that's pretty authentic to certain regions in China. But it also reminds me a lot of the stuff I ate growing up. But what I love is that it's super trendy and everybody thinks that it's the best food, but at the same time, everything is super spicy and everything gives you diarrhea the next day. Gnarly, really authentic!

I know the guy who started Mission Chinese and I know he had the same issues I had with lame San Francisco cuisine. So I think that's why he makes his food so spicy. It's not for everyone, but people are convinced it's really good even though it probably punishes their body every time they eat it!

Do you have cities you dig touring in for the food?
Yeah, we recorded in Portland for two months and that city is just insane for food. It's gotten out of control, I mean, the food cart thing there!? There are food carts all over the place and these are fancy carts! You can get amazing food for under 5 bucks and then you just walk a hundred yards and you can get something totally different at another food cart. You can spend the whole time just walking around eating and it's all really delicious. People there are so nerdy about food!

Did you favor a particular food cart?
There's a restaurant called Pok Pok that started as a food truck actually and then they opened up a restaurant and it's Thai food. But it's not typical Thai. It's more of a Thai barbecue chicken they serve, I've never had it anywhere else. But it's damn good!

Describe the best food experience you've ever had on tour.
I would have to definitely say it happened in Spain. We toured Spain last year and seriously we spent the whole tour just eating. All of us came back from tour and had gained 15-pounds, for real. We were just there 6 days, but we would scrap sound check for a good meal. We would make detours go to this one spot that we heard about in some small town.

I guess the one experience I'd that I go with is the time we had made a detour to the small town, I don't remember the name of it, but they had this place called Casa De Pulpo (house of octopus). I was completely sick that day and wasn't talking to anybody. And this place only served octopus. They just had a big pot with boiling octopus and you order a smaller or large. They just pull out a couple of legs, chop it up, throw on some olive oil and salt and some Spanish paprika and serve it with bread. It's so amazing, it's melts in your mouth. And I remember I felt like such shit but it truly revitalized me.

Where in Spain was that?
You know, I've been trying to figure this out for like a year, I don't really remember. I was thinking was somewhere near Galicia. There so much good food in every region there — you just need to find a tiny little town. The smaller the village and the better the food!

The Dodos' latest album "No Color" is available now on Frenchkiss Records.

Check out The Dodos latest video for the song "Black Night"

Be sure to also check out their popular video for the song "Fools" from their second album:

· The Dodos [Official Site]
· All Sound Cheques on Eater[-E-]