Taco Bell Would Like an Apology For Beef Lawsuit 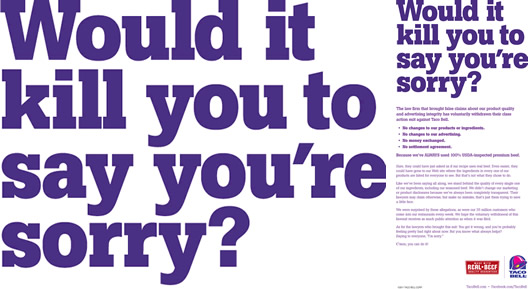 Although the lawsuit that claimed Taco Bell only used 36% beef has now been dropped, the fast food chain isn't about to let the damage to their public image slide so easily. They use 88% beef, and how dare someone suggest otherwise!

So the company has launched an ad campaign demanding an apology from Beasley Allen, the law firm behind it.

Full page ads ran today in the Wall Street Journal, LA Times, and the New York Times asking "Would it kill you to say you're sorry?" Yo quiero apology? Taco Bell is planning on running the ads in local papers in both English and Spanish. So which is it? First they're happy to be sued, now they want an apology?

Here's the full ad, which is very similar to the one they ran back in January thanking Beasley Allen for suing them. Plus a video from the CEO saying that the lawsuit being dropped "comes as no surprise."

· Taco Bell Asks Attorneys: Would It Kill You to Say You're Sorry? [Yum Brands]
· Taco Bell: Beef Lawsuit Dropped; Lawyers Got it Wrong! [YouTube]
· Taco Bell Ad: Thank You For Suing Us [-E-]
· All Taco Bell Coverage on Eater [-E-]