Soap Opera Fans Rebel Against Mario Batali and The Chew

Share All sharing options for: Soap Opera Fans Rebel Against Mario Batali and The Chew 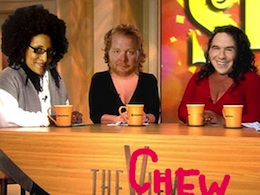 Do not mess with someone's soaps: after ABC announced it was adding a food-themed talk show co-hosted by Mario Batali called The Chew and canceling long-running soaps All My Children and One Life to Live this fall, soap fans have not been too happy.

In fact, after a video of him discussing the soap cancellations popped up on TMZ, the Batali-hate has turned into an old fashioned commenter shitstorm, both on the soap boards as well as here on Eater.

Despite the fact that Batali denied that The Chew would be any better than the canceled shows and said that "I certainly don't want anyone out of a job," soap fans are skinning him alive in the comments and asking him to abandon the project so their shows can survive. Some of them are even suggesting a boycott of ABC! Here now, the top ten craziest comments:

· saynice: "Um Mario, your ridiculous greed played a major role. And your show will be a sad failure . I am a foodie, but this is just too much.....Idiot!"

· anonymous: "The only "Chews" I want to see are "Jimmy Choos" on my soap opera actresses. I have the Foodnetwork for food. ABC is for soaps.

· dottyjane: "Well here is a thought Mario if you are not to blame for the soaps getting cancelled and as you put it It wasn't like I voted them out." BAIL ON ABC CANCEL WITH THEM."

· ButeoLover: "I want my OLTL and ABCD/Disney can kiss my coveted demo azzzzzzzz and watch me spend my expendable income on products advertised on competing networks. I'm so DONE with ABC and Disney."

· Ruth Miller Womack: "I wonder if your mother watches soaps what she would say."

· anonymous: "Does this fat slob really think that people care about what he has to say outside of cooking instructions? What a narcissist. Can't wait for this stupid project to go belly-up."

· idrvankipling: "ABC execs can go CHEW their own ass! If I wanted to watch this sort of thing I'd go to Food Network or Bravo. There are at least 3 dozen+ outlets on television for me to watch reality television if I so desire. If however they all closed their doors tomorrow and the only thing left to watch in the ENTIRE world I'd never and will never watch ABC again! The Chew,The Revolution and whatever else ABC happens to throw on the air can go to hell!"

· anonymous: "Whoever dreamed this up has their head eight miles up their ass. It'll be fun to wath it all crash nd burn, though. What a pack of idiots. Who in the hell have the big green light to this?"

· anonymous: "MAYBE THE BETTY CROCKERS WILL BE INTERESTED BUT THIS SHOW WILL BE HATED BY ALL THE PEOPLE THAT LOST A SHOW DEAR TO THEM. SO I CAN'T WAIT TO WATCH YOUR SHOW FAIL...."

· anonymous: "Sounds like suicide to me. Agree with everyone, I'll watch the food network but wait I don't, sick of reality/talk/food/cooking shows thats why I watch the soaps. Nothing on TV at night now nothing on TV in the day. Glad I bought my nook."