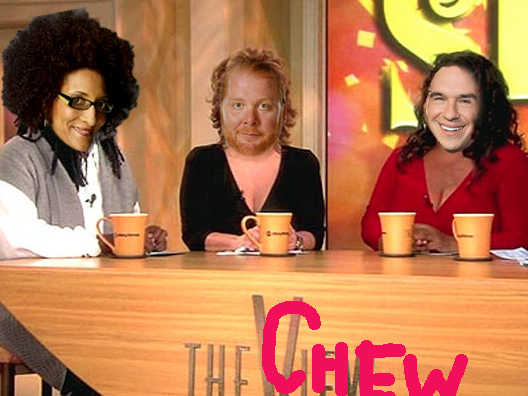 ABC announced today that it's canceling the long-running soap operas All My Children and One Life to Live and replacing them with two new one-hour daytime talk shows, The Revolution and The Chew.

The Chew will premiere in September 2011 and, according to a press release, the show will "focus on food from EVERY angle." The "rotating cast" of hosts includes chef Mario Batali, Top Chef's Carla Hall, chef Michael Symon, nutrition expert Daphne Oz, and entertaining expert Clinton Kelly. Sort of like The View but for food?

From the press release: "This new one-hour series combines entertaining takeaway with memorable personalities to create a live show where viewers get the dish on anything and everything related to the world of food and beyond. Whether it's new trends like food trucks and urban gardens or how pesticides in our food may affect our health, we can't stop talking about it."

The show will be produced by Gordon Elliot, the Emmy Award-winning executive producer of Paula Deen's Home Cooking and Down Home with the Neelys. Here's the press release:

ABC EVOLVES THE FACE OF DAYTIME TELEVISION WITH THE LAUNCH OF TWO NEW SHOWS, "THE CHEW" AND "THE REVOLUTION

Iconic Shows "All My Children" and "One Life to Live" Will Broadcast Their Final Episodes in September 2011 and January 2012, Respectively; Series Will Sunset in a Manner That Honors Viewers and the Shows' Creative Legacies

Guided by extensive research into what today's daytime viewers want and the changing viewing patterns of the audience, ABC is evolving the face of daytime television with the launch of two new shows, "The Chew," which will premiere in September 2011, and "The Revolution" (working title), which will premiere in January 2012. These new shows expand ABC Daytime's focus to include more programming that is informative and authentic and centers on transformation, food and lifestyle -- cornerstones of programming that resonates with daytime viewers as evidenced by the success of "The View."

As food has become the center of everyone's life, "The Chew" will focus on food from EVERY angle -- as a source of joy, health, family ritual, friendship, breaking news, dating, fitness, weight loss, travel adventures and life's moments. Produced by Gordon Elliot, the Emmy Award-winning executive producer of "Paula Deen's Home Cooking" and "Down Home with the Neelys," this new one-hour series combines entertaining takeaway with memorable personalities to create a live show where viewers get the dish on anything and everything related to the world of food and beyond. Whether it's new trends like food trucks and urban gardens or how pesticides in our food may affect our health, we can't stop talking about it. The hosts who will guide the hour include Mario Batali (Restaurateur, Food Network's "Iron Chef America" and author); entertaining expert Clinton Kelly (TLC's "What Not to Wear"); Carla Hall (Bravo's "Top Chef"); Michael Symon (Restaurateur and Food Network's "Iron Chef America"), and nutrition expert Daphne Oz, who simplifies often confusing information about food.

From Executive Producer JD Roth and 3 Ball Productions, producers of "The Biggest Loser," "Masterchef" and ABC's upcoming "Extreme Makeover: Weight Loss Edition," comes "The Revolution," a daily show about health and lifestyle transformations. The show is hosted by a team of experts and rotating guest contributors who help viewers transform all areas of their lives, from relationships to family, food, style, home design, finance and more. This dream team, led by fashion expert Tim Gunn, also includes celebrity trainer Harley Pasternak and American Idol alum Kimberley Locke. The show features a unique concept: each week one woman's five-month weight loss journey will unfold in just five days, with daily results and a final transformational reveal on Friday. "The Revolution" is a one-stop shop for better living.

"While we are excited about our new shows and the shift in our business, I can't help but recognize how bittersweet the change is," said Brian Frons, President, Daytime, Disney ABC/Television Group. "We are taking this bold step to expand our business because viewers are looking for different types of programming these days. They are telling us there is room for informative, authentic and fun shows that are relatable, offer a wide variety of opinions and focus on 'real life' takeaways. A perfect example of this is 'The View,' and that factored into our decision. 'The Chew' and 'The Revolution' are in the same vein and will be great additions to the lineup, with 'The View' serving as an ideal foundation from which to launch these programs. They will also provide enormous opportunity for the creation of ancillary businesses and growth."

"General Hospital," the second-most popular show in daytime, is not impacted by this announcement and will remain on the air.

To honor the core, passionate audience and their rich history with our soaps, "All My Children" and "One Life to Live" will conclude each series in a manner that respects their legacies and the longstanding hopes of many of their viewers.

"'All My Children' and 'One Life to Live' are iconic pieces of television that have made an indelible mark on our culture's history," reflected Frons. "Each of the shows has touched millions and millions of viewers and informed the social consciousness. It has been a privilege to work with the extraordinary teams who brought the residents of Pine Valley and Llanview to life each day, and we thank the cast, crew, producers and most especially the fans for their commitment to the shows through their history."

None of this could have been possible without the extraordinary Agnes Nixon. "More than 40 years ago, Agnes Nixon created both the worlds of 'All My Children' and 'One Life to Live,' worlds that the rest of us have been privileged to live in," said Frons. "Her shows led the way forward, breaking a lot of rules along the way to defy expectations about what soaps can do and the issues they can cover.
I am honored to have worked with her."

"All My Children" has revolved around the lives of the residents of fictional Pine Valley, a town which closely resembles the Philadelphia Main Line. "All My Children" took home the 1998 Emmy Award for Outstanding Drama Series, the third time the show received this top honor, having also garnered the award in 1994 and 1992. "All My Children" has received more than 30 Emmy Awards and consistently distinguishes itself in the field of daytime drama. The show has historically been committed to and is often the first to tackle social issues, focusing on such topics as AIDS, abortion, cochlear implants, teenage alcoholism, racial bias, acquaintance rape, spousal abuse, homosexuality, Reyes syndrome, Vietnam MIAs, drug abuse, the risks of motherhood over 40, safe sex, pet therapy and organ donations, among others. The show made television history airing daytime television's first same-sex kiss between two lesbian characters, as well as daytime television's first same sex wedding between two women. It was the first to chronicle the coming-out story of a transgender woman and to cast a real life Iraq War veteran whose story reflected his real life experiences and injuries incurred in combat.

"All My Children" premiered on the ABC Television Network on January 5, 1970, as a half-hour show; seven years later it expanded to an hour. Julie Hanan Carruthers is executive producer.

Also created by Agnes Nixon, Emmy Award-winning "One Live to Live" is set in the fictional town of Llanview, which is modeled on a Philadelphia suburb. "One Life to Live" debuted on The ABC Television Network July 15, 1968 as a half-hour show. Ten years later, it grew to a full hour in 1978.

"One Life to Live" has been lauded for its groundbreaking exploration of social issues, diverse canvas, award-winning performances and innovative storylines. Along with the history-making week of live shows in May 2002, "One Life to Live" is responsible for many "firsts" in Daytime television, including stories of interracial romance, illiteracy, medical misdiagnosis, racial prejudice, gang violence and teen pregnancy. The show received mass critical acclaim for its 1992 homophobia storyline, which captured national headlines when it introduced the character of a gay teen (played by then unknown Ryan Phillippe) and culminated with the emotional display of the Names Project AIDS Memorial Quilt. "One Life to Live" was honored by the Gay and Lesbian Alliance Against Defamation (GLAAD) with the Outstanding Daytime Drama Award in 1993, and again in 2005 and 2010.