Share All sharing options for: Watch Jamie Oliver Fill a School Bus With 57 Tons of Sand 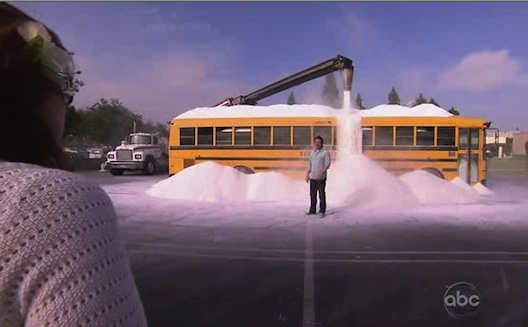 The very earnest premiere of the second season of Jamie Oliver's Food Revolution aired last night, and in what he admitted was a "stunt," Oliver filled a school bus with 57 tons of sand to represent the amount of sugar kids consume from flavored milk in a week. An effective image, to be sure! Only problem is, no one showed up to see it.

Of course Oliver was very, very disappointed in the turnout of about 20 people. He expected more from Los Angeles: "You come to a city like this expecting a certain reaction, and it's not what we're getting." Instead, "We're doing a great, great show about how people don't give a fuck." In fact, he even thinks that "maybe LA was a big mistake"! In the clip below, Oliver looks like he might burst into tears at any second.