Nightline Jumps on the 'Pie Is the New Cupcake' Bandwagon

Share All sharing options for: Nightline Jumps on the 'Pie Is the New Cupcake' Bandwagon 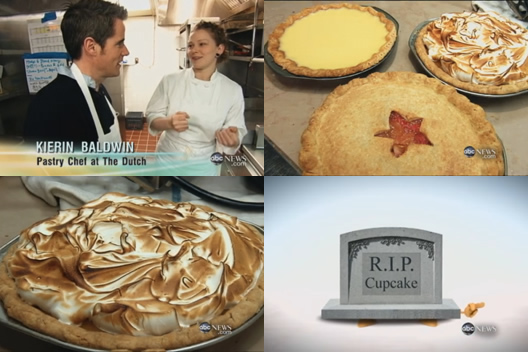 Nightline, ABC's astute arbiter of trends, ran a whole segment on Friday about the emergent and fashionable pastry of the moment: pie. Now, one of the stories that originally kicked off the "pie is the new cupcake" trend vortex was from the New York Times way back in November — so that's about a five-month delay (pretty good by Nightline standards).

, her recent popup promo pie shop, and Hill Country Chicken's pie happy hour and pie milkshake in NYC. And in a sharp PR coup, the show gets a sneak peek at the dessert menu at chef Andrew Carmellini's upcoming NYC restaurant The Dutch. The show even uses hard data to confirm the trend: In 2010, Americans ordered 722 million pieces of pie in restaurants, up 12 million from 2009. That's a lot of pie!