Olive Garden Actually Has a Tuscan Cooking School, Kind Of

Share All sharing options for: Olive Garden Actually Has a Tuscan Cooking School, Kind Of 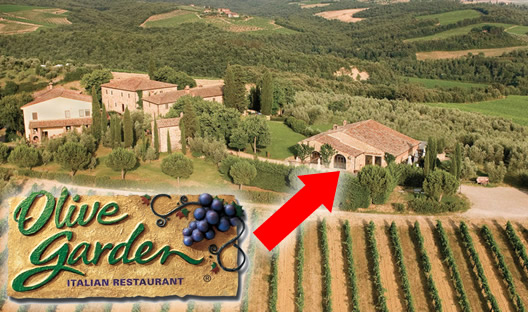 Over on Reddit, a former Olive Garden Manager is answering questions about the company's Tuscan cooking school. It's real! Sort of? Actually, the chain restaurant sends a bunch of managers to a hotel during the off-season, and they site-see and eat and drink a whole bunch and learn a little bit about Italian food. At least it's all paid for by Olive Garden? Below, all your questions about Olive Garden's Culinary Institute of Tuscany, answered.

On Olive Garden's Culinary Institute of Tuscany: "I was a manager at Olive Garden and was sent to their culinary institute in Tuscany back in 2007. It was more like a hotel, during the off-season, with restaurant on site. They would let the Olive Garden come and stay in all the rooms (small place-maybe 20 rooms) and they would use the restaurant (closed to the public-again off season) as a classroom for maybe an hour here or there and talk about spices or fresh produce for a minute before going site seeing all day."

On his interactions with the "chef": "The only time we saw the "chef" was when she made a bolognese sauce while taking pictures with each of us to send to our local newspapers."

On how much Olive Garden paid for, and what they got in return: "Basically, yes, they send people to Italy every year. As a manager I still got paid my salary and didn't have to use vacation time, it counted as "work." They paid for everything from meals, sightseeing, flight, everything except souvenirs. But in return, they sent pre-written articles to out local newspaper with fake quotes from me and a group photo. Also every year when they would run the promotion, I was supposed to wear a special "chef" coat and make conversation with guests who ordered the promotional meals."

On how much he got out of it: "There wasn't much learning involved. Still though, it was a free trip to Italy."

On the most valuable thing he learned in Italy: "Alfredo sauce is just butter with Parmesan cheese. The addition of heavy cream was made in the good old USA. Most italian food isn't like OG (shocker right) In Italy they like to use a few simple ingredients."

On whether the Culinary Institute of Tuscany looks like it does in the commercials: "I haven't seen the new commercials. I remember that the picture on the menu was of the vineyard we were at."

On why he got chosen to go: "Honestly I wonder why I got chosen. Yes, I was a great employee who moved up into management fast and did a good job. But before I was nominated by my district manager I had got into a little trouble right before. Nothing serious, just a misunderstanding really. The company takes all the district managers nominations and picks the people from there."