Andrew W.K.: Food Is a Party, Get Your Lard On

Share All sharing options for: Andrew W.K.: Food Is a Party, Get Your Lard On 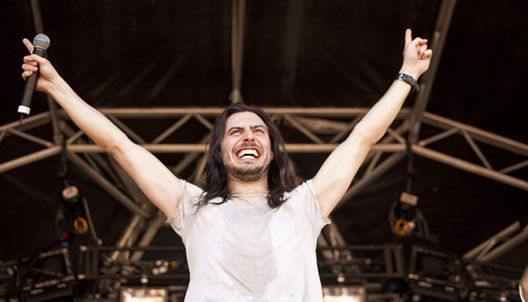 Andrew W.K. may as well be called the MC of all parties. Food parties. Rock parties. Motivational speaking parties? Yep, those too. It was W.K.'s major label debut "I Get Wet" that brought his high-energy party anthems to the masses in 2001. His larger-than-life personality quickly made him a Warped Tour staple and eventually, host of his own show on MTV2 called "Your Friend, Andrew W.K." Not one to languish, W.K. began touring as a motivational speaker in 2005 and later opened the popular New York music venue Santos Party House in 2008. Today he continues to spread his party mantra by touring the globe and delighting Twitter followers with endlessly entertaining "Party Tips." I managed to catch the busiest partier himself for a quick chat about bacon tacos and food highs.

Let's kick things off with a party question: you've said in past interviews that your favorite alcoholic beverage is just shots of straight vodka — is that true, or do you ever try mixed drinks or beer when you're partying?
I like mixed drinks as well, of course. I have not been a big fan of very sweet drinks although the Manhattan cocktail is a favorite of mine. But drinking straight shots of vodka or really any liquor has always been my preference. I'm not really sure why, maybe because you can really taste the liquor and feel it burn your throat differently. I also really like water and vodka or water and whiskey, I just don't like to water down the alcohol flavor too much. But I do like Margaritas. With crushed ice, it's great.

I recently watched a Time Out New York video where you explained that over the years you've only gained or lost weight through natural foods or supplements. What are the foods or supplements you swear by for weight gain or loss?
It's more of a mental state for me than it is diet — mind over matter. I will force my brain to change its metabolism. I will dictate a faster rate of metabolic process or a slower rate, like if I'm feasting and really gorging myself I'd prefer to have a faster metabolism. Really all I want is the joy of eating food. The actual physical sensation of eating and flavor. If you're eating something salty or something sweet, it actually FEELS different. And I want to enjoy that for all it's worth!

What are your favorite local NYC restaurants?
Well like last night — there are a couple restaurants I like to hit back to back and sorta double down, a double-header basically. And that would be the White Castle and Taco Bell located on 8th Avenue between 37th and 38th and you can basically walk this beautiful stretch of road and hit Taco Bell, White Castle, Two Bro's Pizza and end up at a Gray's Papaya to top it all off with a Papaya drink or coconut drink. I've done that many times.

That's like fast food row right there! And fast food is what really keeps me in touch with the rest of the country. Restaurants like Taco Bell and even White Castle are relatively rare in New York City compared to the rest of the country and I'm glad I get to participate in that kind of restaurant and that kind of food, because you really get a rush — a high — when you eat that food!

Do you ever try street food? What are some of your favorite food carts?
Yeah actually in my neighborhood, I live in Midtown so we're kind of close to Murray Hill -- or "Curry Hill" as they call it — where there are a lot of Indian restaurants. So there are actually a lot of really good Indian food trucks around — there's a Dosa cart and a larger truck that serves dosas and Tandoori. I really love Indian food especially if you can get it spicy, any food you can get spicy I really love, and Indian food is just so flavorful: a lot of onion, a lot of garlic. I wouldn't eat that if you were on a first date with a romantic interest, but it is very satisfying food.

Do you have a particular restaurant or menu item you crave when you're away on tour?
Yes there's a restaurant called P.J. Clarke's that I really like. I like a lot of really late night restaurants and PJ Clarke's has a pretty late hour of operation. They're famous for their burger. Frank Sinatra was a big fan of their burger. They have a couple locations now but I think the one I used to go to was the original location on the East side on 2nd Avenue. And my other favorite restaurant is Big Nick's Pizza and Burger Joint, open 23 hours a day, 7 days a week. And it's, in my opinion, the best all-around diner — they have all kinds of diner food and a lot of Greek food because the owner, Big Nick, is Greek and also owns a Greek restaurant down the street called Nico's. But this is the thing, they have a huge menu and vast variety of food, you wouldn't think that kind of restaurant would have good pizza. But I think this is actually the best New York slice in the city — which is a big statement to make. And everyone has their preference or their own style — some people like the sweet sauce, some more spicy like myself, some like thin crust — but I however you take it Big Nick's is the best of all worlds. Even their burger's one of the best and that goes a long way in my book!

Santos Party House is in the thick of Chinatown — do you have any Chinatown haunts you hit regularly?
Yes actually right across the street from Santo's Party House on Lafayette Street is a special Vietnamese?.I guess?.business? I wouldn't want to call it a restaurant really but it's called Sau Voi. It's sort of like an all-purpose corner store — they have music, CDs, cassette tapes, DVDs of Asian music, all kinds of women's underwear and lingerie for sale. And then cigarettes, batteries, playing cards? some men's underwear as well but a very limited supply of that. But they also happen to have a really excellent selection of Vietnamese food! Especially their sandwiches, they have this Vietnamese smoked meat sandwich that is really good, even the New York Times wrote them up for their sandwiches. It just goes to show you that in New York you can go into a place that looks like a hardware store, and if you know the right people, or ask the right questions, you can walk out with a really amazing meal.

What are your favorite US cities to tour in because of the food?
I really like Cleveland and Cincinnati, Ohio. Cincinnati is known for their chili. And in Cleveland they have this thing they call Jojos. And if you go to any restaurant in Cleveland and look at the side orders you'll see french fries, salad, hash browns and then you'll see this thing called Jojos — and you're wondering 'What the heck are Jojos!?' But Jojos in Cleveland means spiced potato wedges! And I don't usually like to order potato wedges because I don't like to say that name so most of the time even if I really crave them I wouldn't order them because I don't like to say, "May I have the seasoned potato wedges please." But in Ohio I can say, "May I please have an order of Jojos," and it's no problem. I've saved all that embarrassment and awkwardness and I get a delicious potato meal.

I know you prefer not to eat before shows, do you have a wind-down ritual for after? What kind of food do you usually eat?
Usually two or three hours after getting offstage I'll begin the eating process, usually carbohydrates, protein, and fat.

What was your most memorable food experience on tour?
I've had many great meals, like this last summer on the Warped Tour: when we went to Morton's Steakhouse with my whole band. We must've looked rather haggard group because they put us in a private dining room which was very nice and luxurious but I think it was to hide us from the other patrons.

Other than that, I remember in October we were on tour in Los Angeles and there was a food truck that pulled up into the venue's parking lot after we played. And LA has one of the most flourishing and thriving food truck scenes in the US outside of Portland. My guitar player, my drummer, and I went to check out this food truck and it was a place that specialized in bacon with a very clever name: Lardon! And their Twitter is actually @getyourlardon. It was one of the greatest meals I've ever had, we each got orders of bacon tacos, which were ground beef and cheese tacos but instead of a hard shell corn tortilla you have bacon. And a bacon sandwich with blue cheese, fresh focaccia bread, hot peppers, onions, lettuce, tomato, and a ranch kind of sauce — just really incredible food. And you can really tell when I meal is good when you've eaten all you ever could and you don't feel nauseous, you feel euphoric!

And now for the fun question: if you could describe Andrew WK as a food or meal what would it be?
Every candy bar in the entire candy section!

Awesome, anything else you want Eater folks to know about how you like to party with food?
It's just fun! Food is a party, it's exciting. It should be a source of entertainment and nourishment. And just do everything you can to not let food become anything but fun. Let it be a source of pleasure, not anxiety or neuroses or stress. It's just one of those natural highs!