Top Chef All-Stars Finale: And Then There Was One

Share All sharing options for: Top Chef All-Stars Finale: And Then There Was One 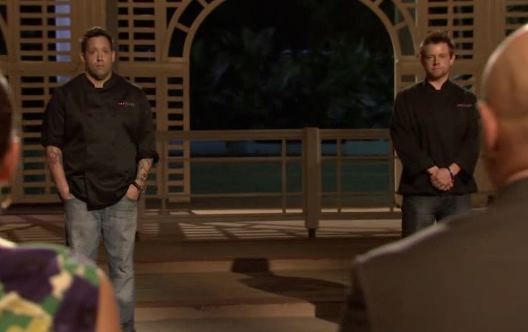 The noted intellectual Nelly Furtado once said, "all good things must come to an end." Technically she didn't say it, she sang it, and it was actually "All Good Things (Come To An End)" because it was a song title and pop songs tend to go hard on parentheses for some reason. My point is she was the first person to ever express that sentiment, and I'm glad she did. But you know what else comes to an end? Everything. Even not good things, thankfully! Praise be to Andy Cohen. And sometimes when a not good thing ends, that ending turns out to be pretty darn good. Now is it only good because it means that bad thing is over? I can't answer that question. We aren't all braniacs like Professor Furtado over here.

If you haven't figured it out, I'm talking about last night's Top Chef All-Stars finale. (I am sorry to shroud my meaning in codes. I am the Dan Brown of television recapping. The Grail's a vagina or is it?!) After a sluggish season, All-Stars concluded satisfyingly and dramatically for this reviewer. Dramatically because I managed to avoid spoilers. I'm sorry if Matt Lauer ruined the ending for some of you, but somehow I continued my perfect Ripken-esque lifetime streak of not watching the Today Show. Imagine that! It's almost spooky how good I am at not putting on that show every single morning.

Isabella and Blais deserve most of the credit for the quality of finale. Friends and rivals, they each entered into the final elimination both seeming like underdogs, which is quite a feat of editing on Bravo's part. I don't think I've ever rooted for both chefs in the finale before! What exactly happens when two underdogs fight each other? I think that's how they make cats.

Richard Blais, the early favorite and winner of the most challenges, risked another high-stakes choke. The steam he'd been building had cooled in recent weeks, and Isabella had him doubting his ability to make it across the finish line. Is Richard doomed to be the best Top Chef to never win? "Always the bridesmaid, never the bride" as he puts it? Doom's a strong word. Doom has nothing to do with anything on this show. And Isabella out of nowhere! Mike was the only one who picked Mike to make it to the finale and make it he did. As he repeated many times, he skipped his honeymoon, quit his job, spent weeks preparing and practicing, and put everything on the line to win this season. Loaded with momentum from a streak of Bahamian wins, Mike's odds were pretty even with Blais's. $200,000 is a lot of money.

And thank you, Top Chef, for letting the cooks cook in the finale. It's so refreshing! I was confused most of the episode. "When is Padma going to come out and make them use their hands as feet and feet for hands? They sure seem to be waiting a long time to make theme each switch out their proteins with something from the Mystery Sack." Last night's challenge was daunting in its simplicity: Richard and Mike had to create the restaurant of their dreams. Four courses, one hour to plan, then five hours to cook and prepare the restaurant for its 70 customers. 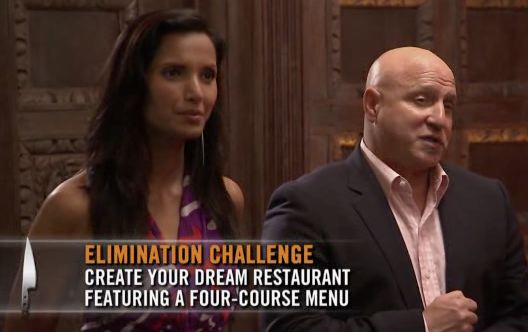 Of course, Top Chef would not be Top Chef without some mild chicanery. Richard and Mike each get to pick three earlier All-Stars as sous chefs, and they walk into the kitchen with a wish list in mind. Mike wants Jen Carroll, and Blais wants a specialist like Dale Talde or Angelo. Neither wants Marcel, of course. At this point, Marcel probably doesn't want to be on Marcel's team. "I'm impossible." Alas, the other All-Stars have each prepared an amuse, and Mike and Richard will have to pick their sous chefs via a blind taste test. Always something with you, Top Chef! 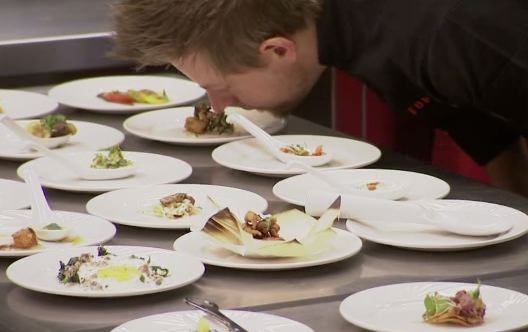 Instead of picking their three favorite tastes, Mike and Richard try to outsmart the challenge and guess at who made what. It works out better for Richard than it does for Mike. Richard gets Spike, Angelo and Antonia. All good chefs, but Richard being Richard starts worrying: Spike legitimately had jet ski reservations later that day, which is hilarious, and Antonia was eliminated, emotionally and violently, about a day ago. She says she's fine but she still seems a bit of a mess. 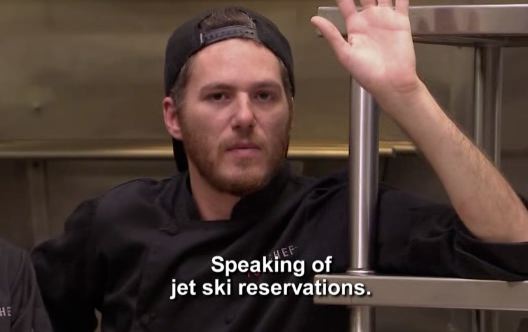 Mike makes three grasps for Jen Carroll and fails on all three. His sous chefs will be Tiffani Faison, Jamie, and Carla. But Mike remains upbeat, and he calls his sous chefs his angels, like Charlie's Angels. Aw, way to stay positive while still sneaking in a tiny bit of that ol' offensive oaf Isabella we all know and sort of love. If Mike fully respected women I might not recognize him. Just kidding, I would, from the eyeball tattoo on his hand. That's a very particular tattoo. 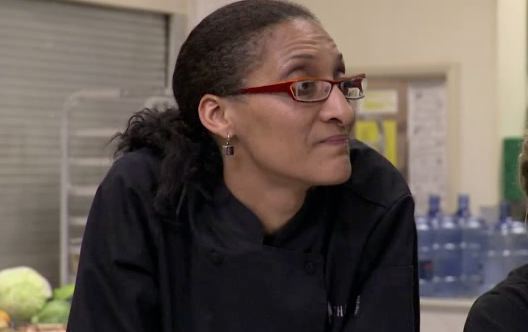 Blais and Mike get to planning, and it is clear they have known what they are going to cook for this challenge for a long time. Tiffani and Carla adorably chime on with dessert ideas, and if this were any other point in the competition, Mike might be compelled to listen, but it's not, so he doesn't. Mike and Richard each have a specific vision for this meal, their own food perfectly distilled and communicated, and the sous chefs are there simply to execute. Mike's plan is to show he is not the Mike of the Las Vegas season, that he's grown and prepared. Blais says he lost his season because he tried to tell too much of a story with his dishes. It's time to just make great food and stop being creative for creativity's sake.

Mike names his pop-up Restaurant Iz, after his nickname Izzy. The flavors will be mingled with his Italian roots. Blais goes with Tongue & Cheek, which is very Blais. His dishes will be playful and have more than one meaning. Probably they will have two meanings. I doubt we'll get three meanings on anything.

For recapping's sake, I'd love to now say that Carla ran into the kitchen in a giant peacock costume and spilled hot milk all over Mike's head and then Richard sneezed into his soup. These things would be fun to talk about and I'd make GIFs and they'd repeat and annoy some of you and delight me and me alone and we'd all have a laugh. But there were few laughs last night. There was just a lot of very delicious food executed very well! Though Blais remains far more a head case than Isabella, they kept their act together in the kitchen. They ran strong prep teams, strong front of house, and excellent food. Sadly there's very little to crap on here. In the spirit of this being the finale and all about the food, let's run down each team's dishes. Blais served one more because he opened with an amuse. 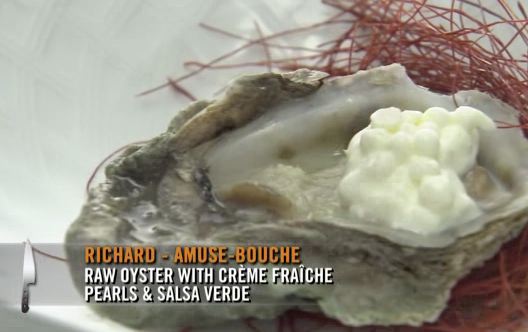 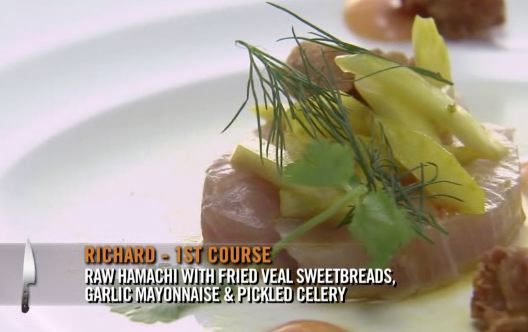 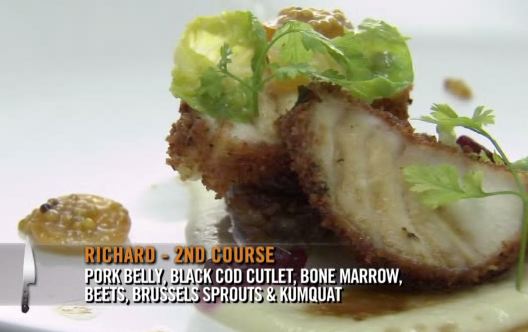 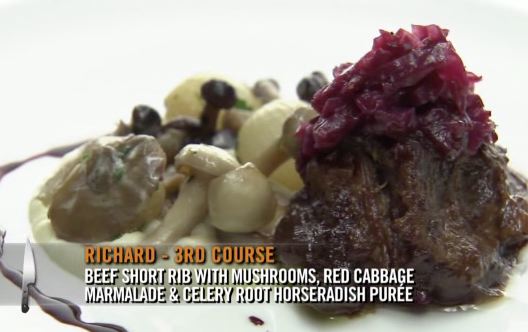 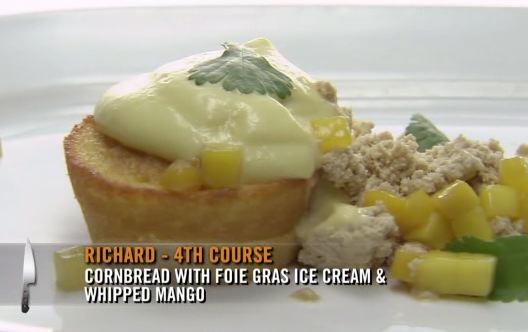 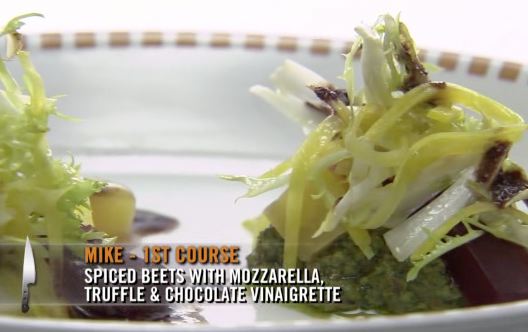 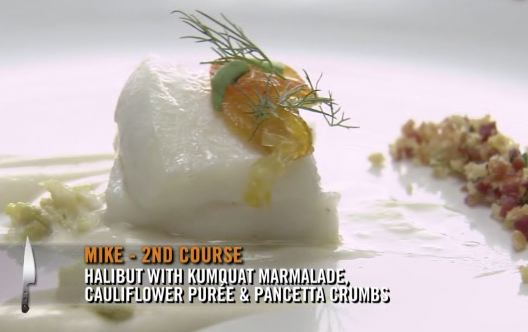 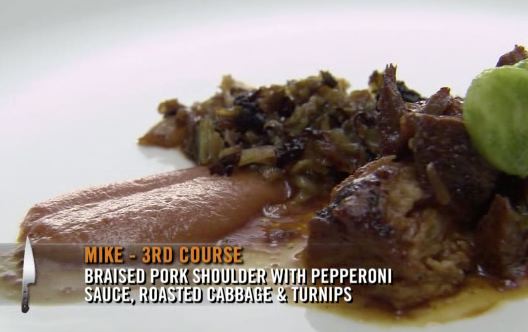 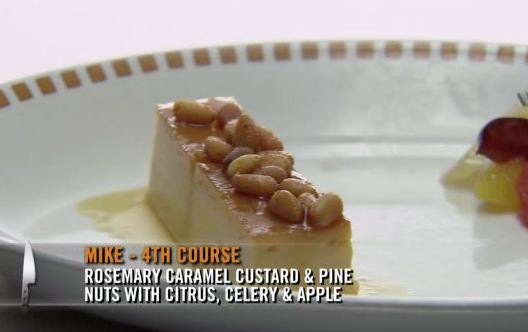 Yum! I wish I'd eaten it. But I didn't. Instead, it got eaten by two separate teams of judges. On one side, Padma hosts Lidia Bastianich, Hubert Keller, Alfred Portale and Bill Terlato. Man, does Terlato Wines have photos of somebody at Magical Elves Productions? His odd hairline and even tan make me uncomfortable and they keep having him back. I mean, it must be all that charisma he doesn't have. 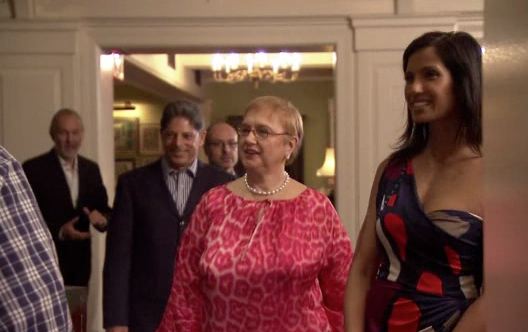 Over at the other restaurant, Tom and Gail dine alongside famous muppet Art Smith and also new Top Chef Masters host Curtis Stone. Hi Curtis! I'm sorry, I'm not going to watch your season because you are neither Padma nor Tom and that is my rule. 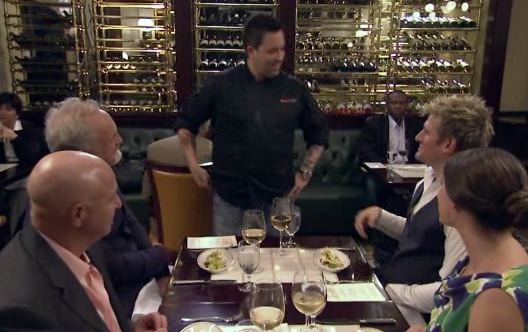 They eat. The meal is great. There are ups and slightly not as ups and then only a few downs. Lots of superlatives are thrown about. About Mike's fish, Tom says he's never had a piece of fish on the show cooked that well. Later, he says, that was the case until he had Richard's. Gail can't stop saying "pepperoni sauce," which I understand, because it is very fun to say, and definitely something I would have written in fifth grade had I made up a cookbook with crayon. Mike's braised pork shoulder really blows everyone's brains out of their head and then it covers their brains in delicious pepperoni sauce.

Blais's foie gras ice cream does not go over incredibly well with Padma's table, so he and Spike make adjustments before Tom and Gail come along. Smart. Their experience with it is much better, and at Judges' Table they'll find themselves split depending on which service they were at. Richard was smart to create an amuse, and the frozen creme fraiche pearls exemplify the theme of his food, and his restaurant, perfectly. Blais's short rib was perfectly executed, but (for him) oddly boring. His hamachi was the strongest course, exploding with flavor. I just said, "exploding with flavor."

It is close! Who can know? They are splitting hairs here. Mike and Richard both feel their meals were executed exactly how they wanted, and their teams worked beautifully. Even Jamie cooked like it was her own finale! All good to hear. No mess-ups, no if-only's, just two chefs serving their food, doing it all for their families and putting food on those families. Speaking of, here are some families, surprising Mike and Blais. Well, sorta family. Mike's whole gang shows up, and there is Richard's uncle? I mean, maybe he is really close with his uncle, and I understand his wife being incredibly pregnant, but there is no arguing with how sad it is to see a nervous Richard only embracing his uncle while Mike is showered in Italian kisses.

As Tom says, either one is worthy, but only one of them can be Top Chef. Earlier, as the judges debated small points and split hairs, Gail said that she'd want to eat at Mike's restaurant during the week, and Richard's on the weekend. And it seems that Top Chef All-Stars is about having a weekend girl: Richard Blais is the new Top Chef. 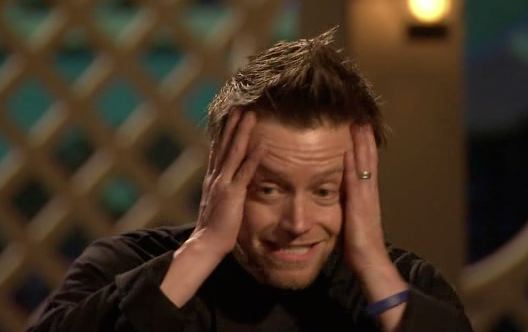 Mike is crushed. A Top Chef All-Star win is everything he could have possibly wanted in life, and he didn't get it. And now it's a reversal and it becomes sad his whole family is there only to console him, not congratulate him. Eek. It seems like he kind of gets a cold shoulder, too? No one is saying that Mike didn't do an amazing job, and Padma's toast politely includes a "thank you to Mike." You're too sweet, Padma. 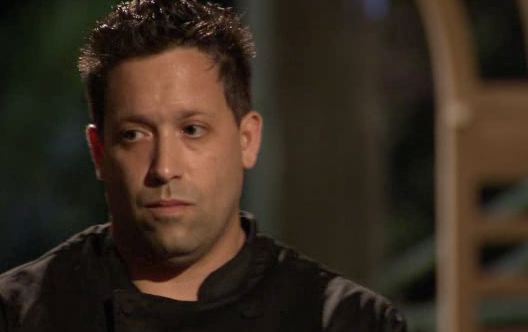 Blais wells up (and bursts) with emotion. He can now open his own restaurant, serving his food, abiding by the pleasure principle. Well deserved, buddy. In honor of your win, here is a classic 90's song "Blais You" by the artist Fatboy Slim, whose moniker also describes the path your waistline took. You look great, sir, and you are now a Top Chef. We all blais you.